Three Kingdoms: Resurrection of the Dragon (2008)

He had early action roles in films such as “Shanghai 13” and “Twinkle Twinkle Lucky Stars”, eventually finding widespread critical acclaim as a leading man in 1988’s “As Tears Go By”. Since then he has forged a hugely successful career be it in comedy, romance, thriller, action or drama movies. Some of his best known films include “God of Gamblers”, “A Moment of Romance”, “Casino Tycoon”, “Moon Warriors”, “Infernal Affairs”, “The Warlords”, “Detective Dee and the Mystery of the Phantom Flame”, “Shaolin”, “Shockwave” and “Chasing the Dragon”, to name but a few.

Needing no introduction, the legendary Sammo Hung stars as “Luo Pingan”. In a career spanning six decades, he has worked with some of the best in the business, from Bruce Lee to Jackie Chan. His work as a performer, choreographer and director helped to reshape and evolve modern screen fighting action as we know it.

From his earliest works such as “Iron Fisted Monk”, “Warriors Two”, “Knockabout”, “The Prodigal Son”, to his comedies and collaborations with his fellow “Fortunes” opera brothers, including “Encounters of the Spooky Kind”, “My Lucky Stars”, “Eastern Condors”, “Wheels on Meals”, to modern-day hits such as “SPL/ Kill Zone”, “Call of Heroes”, “Ip Man”, “Paradox” and “The Bodyguard”, there are very few others who have delivered such a variety of action to consistently high quality levels over such a long career.

Maggie Q stars as “Cao Ying”, a female warrior. Maggie is best known for her roles in the international box office hits “Mission: Impossible III” and “Die Hard 4.0/Live Free or Die Hard”, as well as playing the lead in the popular television series “Nikita”. Her career in movies began in Hong Kong when no less than Jackie Chan saw her potential to be an action star. Her acting career has gone from strength to strength with roles in films such as “Gen-Y Cops”, “Dragon Squad”, “Naked Weapon”, “Rush Hour 2” and the “Divergent” series of films. 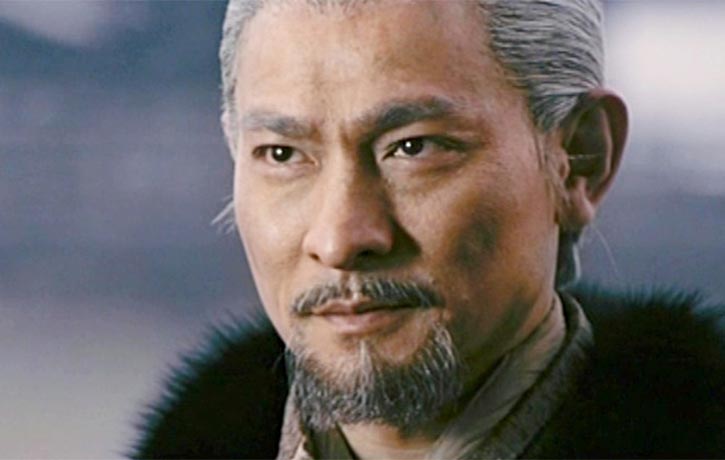 Former Taiwanese boy band star Vanness Wu stars as “Guan Xing”, Guan Yu’s son. As well as a solo singing career, Vanness has had a successful acting career in television and film, and has appeared in the movies “Kung Fu Fighter”, “Dragon Squad“, “Kung Fu Chefs”, “Monk Comes Down the Mountain” and “Ip Man 4: The Finale”.

Part of the new generation of Hong Kong action stars, Andy On appears as “Deng Zhi”, a Shu general and a subordinate of Zhao Zilong. On has featured notably in films such as “The Lost Bladesman“, “Invisible Target“, “Fatal Contact“, “New Police Story”, “True Legend“, “Special ID“, “Blackhat”, “Zombie Fight Club” and “Kung Fu League”, to name but a few.

Actor Ding Haifeng plays “Zhang Bao”, Zhang Fei’s son. He has appeared in “The Empress and the Assassin”, and the blockbusting box office hits “L Storm”, “P Storm” and “Wolf Warrior 2”. A veteran of the Shaw Brothers golden era, star of “A Better Tomorrow” and Jackie Chan’s dad from “Drunken Master 2“, Ti Lung appears as the legendary “Guan Yu”.

Pingan joins his old friend in his final battle

With his country torn apart by civil war, Zhao Zilong, a common man heeds the call of duty. From the humblest of roots he rises through the ranks on wings of courage and cunning to command an army charged with liberating the land from an evil warlord.

Inspiring by action, honour and a dream of unifying his divided nation, Zhao Zilong’s heroism becomes legend, but as the years pass and the throne changes hands, the war still rages on.

When a newly enthroned king decides peace can only be achieved by defeating the warlords once and for all, the aging Zhao Zilong embarks on his final and greatest campaign, a road to adventure that will crown his name in glory for all time. 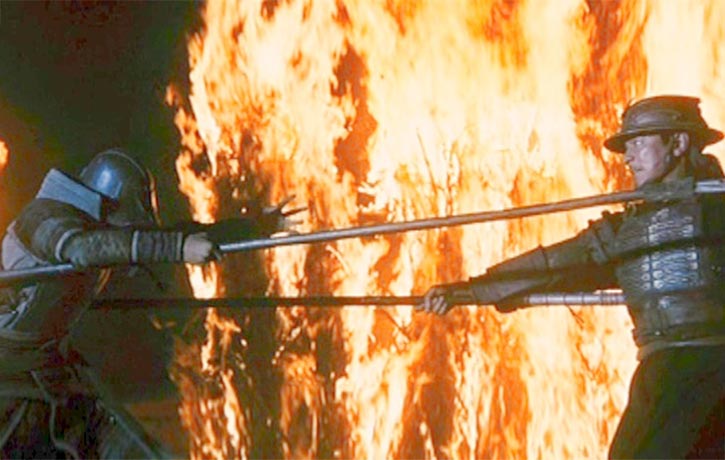 Zilong faces Cao Ying one on one

After a little scene-setting and getting to know our main characters, the first piece of action more-or-less sets the template for the rest of the movie.

A night-time raid on the enemy’s camp features broader battle scenes cut together with individual fights. Nearly all the fighting features the historic armoury of the time, especially the pole weapons such as the halberd or spear.

The dreaded shaky-cam is frequently employed to give the feeling of a “war documentary”, along with lots of wire-assistance. There are however enough grounded and more authentic techniques to be enjoyed in the more intimate duels. 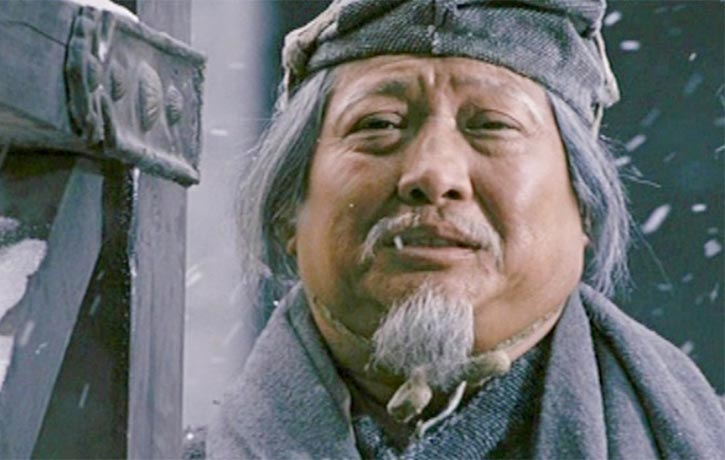 Zilong has a tense battle defending himself and a baby strapped to his back from dozens of Cao’s soldiers. Much like the period kung fu films of the sixties, bright red blood frequently sprays across the screen amidst the chaos of the fighting.

Twenty years and the campaigns of the legendary Five Tiger Generals are glossed over with brief, flashback glimpses of their battles, a voiceover, and some exposition, as their heirs are appointed.

The new generation of generals join Zilong for one last, great expedition to defeat the northern armies. Zilong has a couple of decent duels on horseback, not least his fight with Cao Ying, played by Maggie Q. It builds to an epic final stand as Zilong’s troops defend their Phoenix Heights stronghold against Cao Ying’s marauding army.

This is not an historic battle film filled with drama, but more of an historic drama film, with a few battles thrown in. As such, the pacing never really hits a comfortable rhythm. Just as it feels like the action is getting going, the scene is tied off. 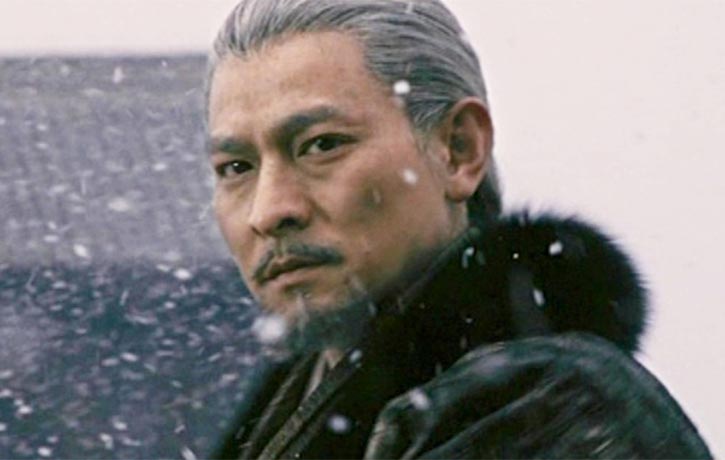 The big battle and smaller individual fight scenes look well-choreographed, but the scale and excitement is often lost in the shaky editing.

Outside of the epic battle scenes, the dialogue sequences are beautifully shot.

Andy Lau gives a superb performance, ranging from the young, heroic soldier, who becomes an inspirational leader, to the battle-weary old general.

Maggie Q also acquits herself well as the ruthless Cao Ying, and Sammo Hung mostly eschews the action, delivering a tender performance as Pingan, giving the story some heart.

Aside from a brief hint of romance for Zilong when he returns to his village a hero, his brotherly relationship with Pingan is the closest we get to any emotional connection with the characters. The biggest sin though is in the final third of the film which started to become a bit tedious between the battle scenes. To me, this felt like a long film yet it was just over and hour and a half.

There are some impressive stunts

This is a well made but ultimately flawed historical epic, that gets off to a good start, garners performances better than the story deserves, but ultimately unravels from the halfway point. If you enjoy historical movies, this is worth a look, but other films such as “The Lost Bladesman”, “The Warlords”, and the superb “Red Cliff”, cover the same territory with much greater success. 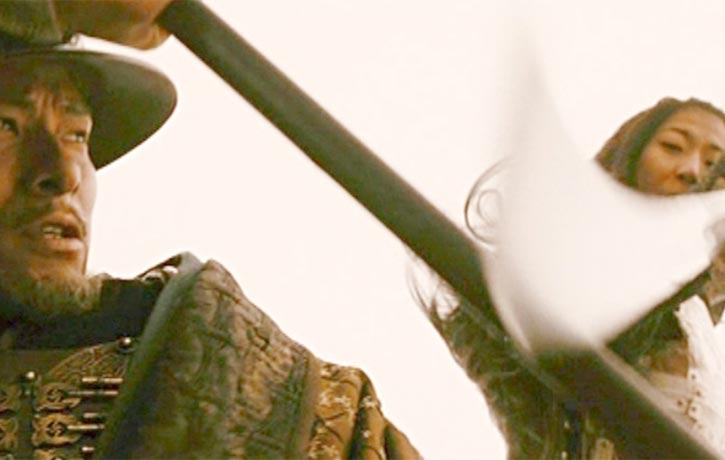 Nearly all the fighting features the historic weapons of the time

Do you enjoy historical epics? Is this among your favourite war films? How was Andy Lau’s performance here compared to some of his other famous roles? Let us know in the comments below, join in the conversation, share this on Facebook, and follow us on Twitter & Instagram.

WHICH KINGDOM ARE YOU FROM? EITHER WAY, CHECK OUT the FUniverse of these Top 10’s, Top 5’s, exclusive-interviews, get nobly attired in KFK wear and subscribe for more regal warriors of FU on YouTube!