Detective Dee and the Mystery of the Phantom Flame (2010)

Hong Kong superstar Andy Lau plays the Chinese Sherlock Holmes “Di Renjie/Detective Dee”, an exiled rebel of the Tang Dynasty. Di Renjie was a real-life official of the Tang and Zhou dynasties. Di Renjie appears as the main character in a number of crime novels and films. The first of these stories, Di Gong An or Dee Goong An, is an 18th century Chinese detective novel, loosely based on Di Renjie. Robert van Gulik translated the novel in the 1940s as “Celebrated Cases of Judge Dee”. He later wrote a series of detective novels featuring Judge Dee as the main protagonist. These in turn were the basis of a 1969 TV series in the UK starring Michael Goodliffe.

Hong Kong actress Carina Lau plays “Wu Zetian” who was a real Tang Dynasty empress of China. Carina won a Best Actress Hong Kong Film Award for the role. She has had a long and varied career starring in films such as “Armour of God“, “Days of Being Wild”, “Project A: Part 2“, “She Shoots Straight”, “The Banquet” and “Ashes of Time”. She is married to “The Grandmaster” star Tony Leung Chiu-wai.

Jinger is the equal of her male counterparts

Actress Li Bingbing plays “Shangguan Jing’er”, a highly skilled martial artist, who serves as Wu Zetian’s maid and right-hand woman. The character is loosely based on Shangguan Wan’er, who was a poet, writer and politician of the Tang Dynasty. Li played Ni Chang the White haired witch in “The Forbidden Kingdom“. She has had a blossoming career in Hollywood with roles in “Resident Evil: Retribution”, “Transformers: Age of Extinction”, and the forthcoming blockbuster “Meg” starring Jason Statham.

Chinese actor, comedian, director and singer Deng Chao plays the fictional albino judicial officer “Pei Dong Lai”. His comedy films “The Breakup Guru”, “Devil and Angel” and “The Mermaid”, are among the highest-grossing films of all time in China. He is also a star of the hugely popular Chinese television variety show “Hurry Up, Brother”.

One of Hong Kong’s most popular actors, Tony Leung Ka-fai appears as “Shatuo”, an old friend of Dee’s who is involved in the construction of a giant Buddha monument. Leung has had notable roles in “Bodyguards and Assassins“, “She Shoots Straight”, “New Dragon Gate Inn“, “Ashes of Time”, “Election”, “Rise of the Legend” and “The Myth“. Comic actors Teddy Robin Kwan and Richard Ng have an hilarious shared cameo as “Donkey Wang Lu”.

In the year 689 of the Tang Dynasty, Wu Zetian is to be crowned the first Empress in China despite opposition from Tang officials. The historic coronation ceremony is to take place in the shadow of a giant Buddha statue, a marvel of architecture that is 200 feet high and still under construction. To the horror of the workforce, two officials involved in its construction die after mysteriously bursting into flames. Following the apparently supernatural deaths, the Imperial Abbott tells the Empress that she must release the former detective and rebel Di Renjie from prison to solve this mystery.

Joining forces with the Royal courtesan Jing’er and Judicial Official Pei Dong Lai, Detective Dee discovers that not everything is as mystical as it seems. With assassins trying to thwart their every move and the balance of power in China at stake, the clock is ticking to solve the mystery of the phantom flame and reveal who is behind it all. 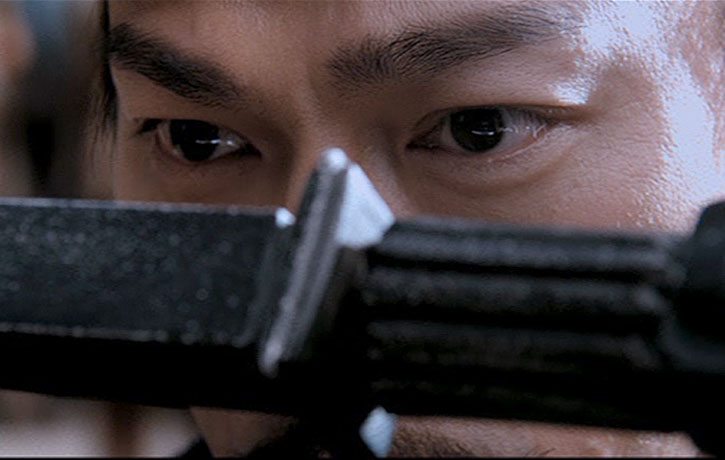 Jinger is both a powerful ally and a deadly opponent

Following the fiery fates of two Tang Officials, the initial martial arts action sees an apparently blind Andy Lau and fellow blind prisoner fighting off ninja-style assassins on top of a scorching stone furnace. It sets the tone for the style of action to come with its slow motion, wire-enhanced flow. Detective Dee displays the first hints of his famed intuition, which is almost a weapon in itself. There is even a comic moment with a quite literal punchline! The sequence also serves to introduce Li Bingbing into the action as Jing’er with her impressive, although occasionally CGI-enhanced, whip skills.

The Empress’s closest confidante, Jing’er is assigned to escort Dee. After a brief, dance-like fight together, they must save each other from the arrow-shooting “Army of Justice”, a group of officials and soldiers opposed to the Empress’s coronation.

Jinger is the Empresss most trusted

This Blind Prisoner gets the best punchline

Dee must recover his focus and fight

Jinger is skilled with the whip

There is more to the Imperial Abbot than meets the eye

The next major martial arts set piece is pure fantasy as our heroes visit Donkey Wang Lu. Fighting strange, demon-like creatures whilst balancing on floating logs, the wires and CGI are very evident. Even so, there are some great hand-to-hand exchanges from Dee and Deng Chou as Pei Dong Lai exhibits some great flexibility and weapons skills. Jing’er demonstrates she is the equal of her male counterparts, fighting with her whip and also a straight sword. She has a particularly impressive duel with a demon, high kicking and butterfly-twisting her way over the wet logs. In a clever plot twist, it turns out that the demons ARE in fact a wire controlled special effect, designed to fool our heroes into thinking something supernatural is going on.

Dee figures out how the Imperial Abbot manifests as a talking stag and confronts them in a prohibited palace. The fight is initially almost psychedelic as an hallucinating Dee fights off CGI deer and the flying, whirling Abbot. However, as the Detective starts to get his act together, we witness more traditional-style sword fighting skills.

The Phantom Flame claims another victim

These demons are not what they seem

The finalé takes place inside the impressive giant set of a Buddha statue. The choreography is a riot of wire fighting, as Dee battles several opponents at once in the pursuit of his quarry. Even so, Andy Lau demonstrates flexibility and skill in his fighting techniques and the nature of the location requires some heavy-looking high falls from the stunt team.

Prior to this movie most Chinese films had highly questionable CGI effects, especially when compared to Hollywood movies such as “Terminator 2” or “Jurassic Park”. Tsui Hark however is a consummate film maker and here he really pushes up the quality of computer generated effects for a Chinese movie. 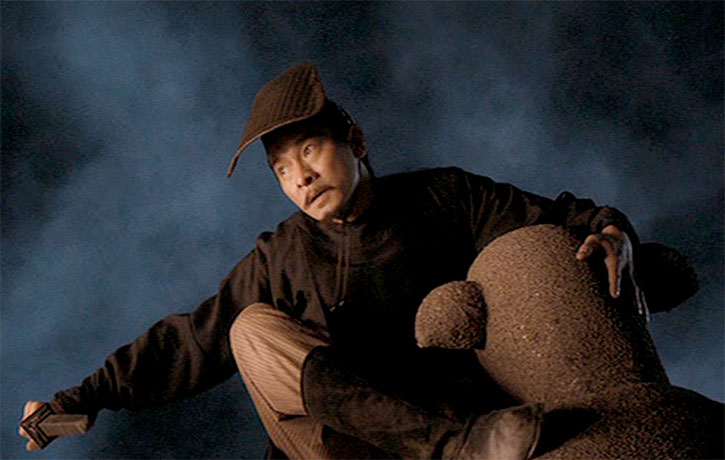 Time to confront the Abbot

A 200 foot Buddha is involved

Not everyone is happy about having the first Chinese Empress

There are some great hand to hand exchanges

If this was a pure martial arts film, it would deserve a lower score in comparison with other movies. The martial arts action may be just slightly inferior in comparison with its theatrical rival of the time, “Reign of Assassins” and it certainly cannot compete with the effects of 2010’s “Avatar”. But this is arguably Tsui Hark’s best film as a director since 1995’s “The Blade”. It looks fabulous with a well told and acted plot, that is clever and witty. The film builds several jigsaw pieces for Detective Dee to put together with a satisfying click for the audience as the paranormal events are explained and the mystery is solved.

For once, this is a director who knows how to use the special effects to enhance much of the action. In fact, it is such a visual feast that I urge those of you with large screens, as I did, to seek this out on Blu- ray over the DVD. Although most of the martial arts action is fantasy-based, it was directed by Sammo Hung, which virtually guarantees a certain level of quality. Not one perhaps for fans of the more grounded “Ip Man” or “Flash Point”, but definitely for those who enjoyed “Crouching Tiger”, “Swordsman” or “Zu: Warriors from the Magic Mountain”.

If we’re honest, most martial arts movies suffer from the lack of a well-executed story, but this is a fun Chinese Sherlock Holmes film with sumptuous visuals and Sammo Hung putting meat on the bones when the action requires it, and it is thoroughly entertaining as a result!

The Imperial Abbot is a talking stag 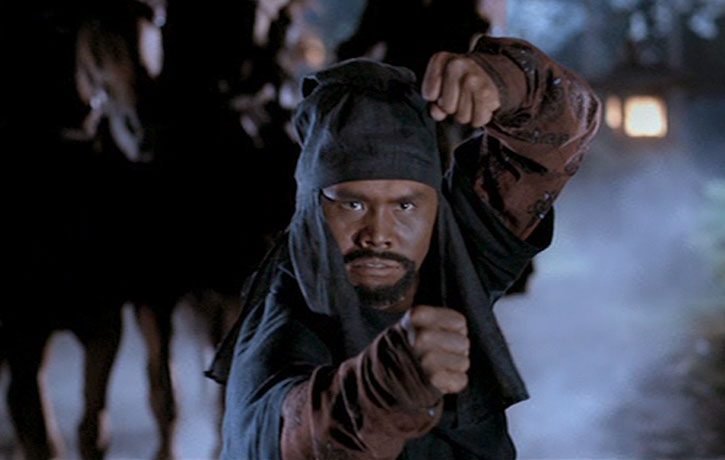 Assassins try to stop our heroes at every turn

The sets are especially impressive

Li Bingbing has a particularly impressive duel with a demon

There is a riot of wirework