It’s not always clear at what point it’s safe to declare that someone in the entertainment business is “on a roll”, but after 2015’s “SPL 2: A Time for Consequences“, the military action thriller “Wolf Warrior” that same year, and now “Wolf Warrior 2”, there can be absolutely no doubt that Wu Jing is. Returning to the role of director and leading man, Wu Jing serves up a cavalcade of explosion-filled, action-packed, thrill-a-minute fun with “Wolf Warrior 2”, an adrenaline-pumping adventure across the plains of Africa that’s equal parts “G.I. Joe” and “Rambo” that delivers everything it promises on a sparkling silver platter!

In addition to once again directing the film, Wu Jing returns to the role of former Chinese soldier Leng Feng, now a mercenary who finds himself pulled into putting a stop to a terrorist plot in his newfound African homeland. Celina Jade steps into the role of Dr. Rachel Smith, a humanitarian worker who teams up with our hero after finding herself a target of the mercenary group led by the vicious Big Daddy, played by Frank Grillo. Hans Zhang plays local factory owner Zhou Yifan, while Wu Gang portrays his security officer He Jiangao, and Yu Nan rounds out the cast by briefly reprising her role as Leng Feng’s fellow soldier and love interest Colonel Long Xiaoyun. 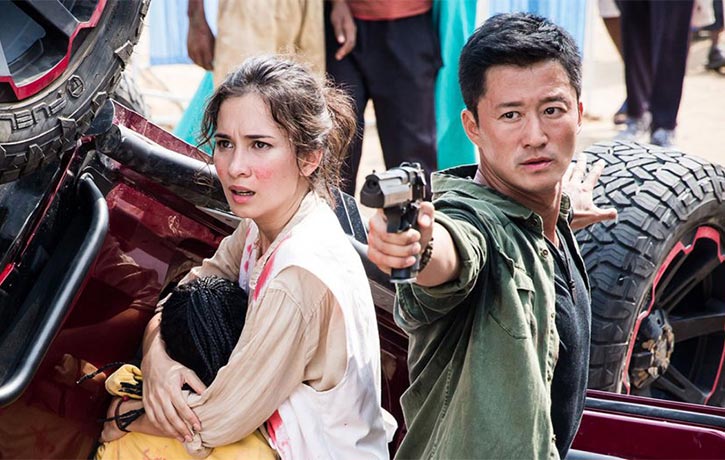 The action thrills are non stop

In the heat of the action

Leng Feng was once a highly-decorated soldier in the People’s Liberation Army of China, until a moment of righteous anger with the wrong wealthy power broker led to his discharge. Feng now works as a mercenary in a coastal African nation, but just when he’s finally managed to get his life back on track, a civil war erupts when the local rebels attempt to overthrow the government. As Feng does his best to help evacuate as many Chinese nationals out of the country as possible, he becomes embroiled in a new conflict involving a mercenary group known as the Dylan Corps, a local humanitarian relief worker and an experimental new vaccine to a lethal virus that the group’s leader, Big Daddy, is determined to get his hands on.

A little perspective – the long-running “Fast and Furious” franchise reached a new plateau of action-packed, stunt-fuelled insanity with 2011’s “Fast Five”, which became the new standard for what the series had to offer leading to ever-increasing levels of action movie eye candy with each of its subsequent instalments. By that reckoning, a theoretical “Wolf Warrior 5” could conceivably end with the entire Great Wall of China lying in smouldering ruins, given that the franchise has already arguably reached its own “Fast Five” at just the second chapter.

Already a renowned action star in his homeland, Wu Jing makes a solid case for himself as an action filmmaker on the level of John Woo, Tsui Hark and indeed, even Jackie Chan with “Wolf Warrior 2”. The entire scope of the film feels much more vast and expansive and takes full advantage of the lush African scenery as our heroes struggle to stay one step ahead of their myriad pursuers. 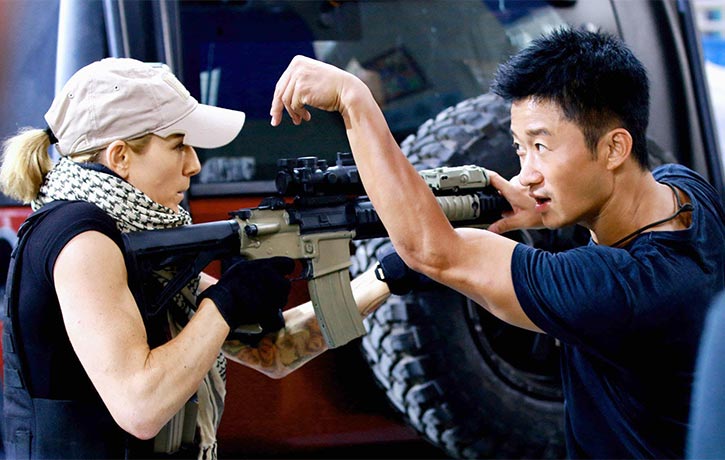 Where Leng Feng’s first adventure sought to give the world a Chinese “Rambo”, “Wolf Warrior 2” expands the scope of his sense of duty and honour to extend not just to his fellow countrymen, but to all mankind from the opening sequence where he single-handedly defends an African freighter from an attack by Somali pirates in an underwater kung fu brawl – and all in a single unbroken take, no less. What could have made for a pretty decent feature length premise for a “Captain Phillips”-esque high seas adventure Leng Feng wraps up before the seven-minute mark, and rest assured, “Wolf Warrior 2” is just warming up!

Like its predecessor, “Wolf Warrior 2” is a military action movie with a side order of martial arts, but this time around, the kung fu is significantly more abundant. Owing to Leng Feng being a discharged soldier and expatriate in a foreign land with none of his fellow troops by his side, the premise calls for a good deal more improvisation on his part, and his skills as a martial artist are first thing he falls back on.

Leng Feng stands his ground against his enemies

The martial arts side of the action is also better integrated into the ballistic battles and explosions than is usually the case with contemporary action films. When Leng Feng and a young refugee under his care hide in a grocery store when the violence breaks out, he spends as much time disarming his attackers and spraying bullets himself amid the punishing kicks and punches he dishes out. Indeed, Leng Feng being such a one-man army is paradoxically the film’s strength and its weakness – our hero is so well-trained and conditioned to handle this level of chaos that the supporting protagonists are often just along for the ride, particularly Dr. Rachel. However, though she does step into the driver’s seat during a sensational chase sequence through a local shantytown, with Leng Feng literally hanging on for dear life.

Like Scott Adkins’ Tom Cat in the first film, Big Daddy is also a rather one-dimensional villain motivated solely by money, but like Leng Feng’s former antagonist, is still a worthy adversary. After the preceding 90-minute chase across the African plains, the film utterly cuts loose in the finale with a locust plague of bullets and explosions on top of explosions. Then there’s the blistering one-on-one smackdown between Leng Feng and Big Daddy that comes on the heels of our hero flipping off a literal panzer attack from the arch-villain – a meme-worthy non-verbal one-liner if ever there was one!

Point blank up against it 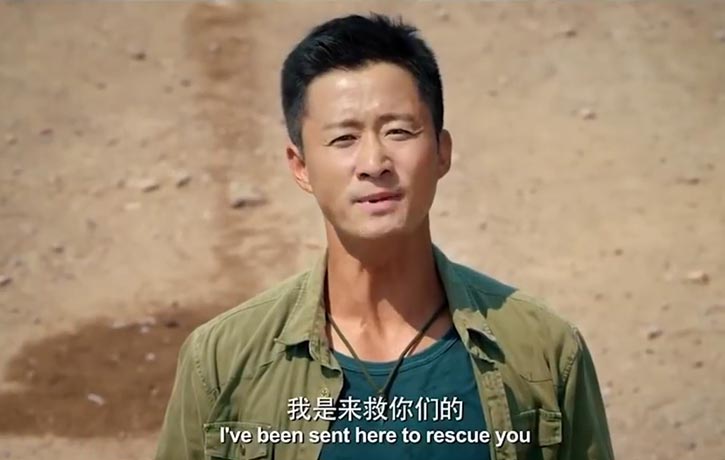 Leng Feng stands up for those who cant up for themselves

With non-stop action, excellent direction by its leading man, and a vastly expanded scope that makes its predecessor almost seem like a warm-up, “Wolf Warrior 2” blasts its way into the hall of fame of military action films. Wu Jing has effectively created his own Ip Man in the form of Leng Feng, an action movie hero destined to go down in history as one of the great big screen super-soldiers – he sure knows how to stand his ground against an approaching tank in the most memorable way imaginable!