For those of you who may have been hibernating wondering what brought about the sudden deluge of Ip Man movies, you can extend your sincerest “Thank You” to 2008’s “Ip Man” starring Donnie Yen. For those who have been hibernating for many seasons, Ip Man was history’s most renown Grandmaster of Wing Chun, the powerful system of kung fu which he would famously pass on to the legendary Bruce Lee. For those lovers of martial arts films, or even general moviegoers, who have yet to see “Ip Man”, like Lucille Ball, you got some splainin’ to do!

Assuming the role of the world’s most well-known Wing Chun practitioner is Donnie Yen. Already one of Hong Kong’s veteran action stars, Yen had come to all but totally reign supreme over the world of martial arts films throughout Asia, but it was with his role in “Ip Man” that he was truly launched to worldwide fame. Fan Siu-wong tackles the role of Jin Shanzhao, a Northern kung fu master who creates trouble for Ip Man throughout the film with his goal of eliminating all of the rival martial arts teachers and establishing himself as number one.

Wing Chun fighters can kick too

Were not gonna take it anymore

Lin is ready to leap into action

Former Shaolin monk Shi Yanneng (credited here as Xing Yu) takes on the role of Lin, an enthusiastic follower of Ip Man’s and formidable martial artist himself. Now a rising Hong Kong action star in his own right, this was one of Yanneng’s earlier roles, and his third collaboration with Donnie Yen (the two traded fists and feet in a particularly brutal duel in Yen’s “Flash Point”.) Villainous duties fall into the capable hands of Hiroyuki Ikeuchi as the nefarious General Miura, commanding officer of the occupying Japanese with a predilection for challenging the local Chinese fighters to duels, developing a particular interest in fighting Ip Man after seeing the Wing Chun master in action.

In the 1930’s, the prosperous city of Foshan is a bedrock of martial arts. Dozens of schools call the city their home, with masters often challenging one another to matches. Wing Chun practitioner Ip Man, however, holds no desire to pit his skills against those of his fellow kung fu masters. Nonetheless, challengers still come knocking at his door, only to lose to the unassuming Ip Man every time. His fellow masters throughout Foshan have grown to greatly respect Ip Man for his policy of conducting fights behind closed doors and not disclosing his own victories in order for his challengers to save face.

The tranquil nature of Ip Man’s approach to private matches and martial arts instruction, however, stands at odds with the outside forces determined to plague Foshan. One of them Jin Shanzhao, a kung fu master from the North who leads a gang of his fellow fighters throughout Foshan to defeat every master with a school in the city. With Ip Man the only master in the city standing in his way, Jin challenges him to a duel, only for the Wing Chun master to emerge triumphant once again.

General Miura is a formidable opponent

Dont even think about it

Do your worst Ip Man

Ip Man and the denizens of Foshan face an even greater challenge with the Japanese invasion of China in 1937. The once independently wealthy Ip Man is forced to work in a local coal mine after he and his family are forced from their home by the Japanese. General Miura, a Karate master and commanding officer of the occupying foreigners, begins conducting challenge matches, inviting the impoverished local Chinese fighters to duel against his subordinate troops, awarding them a bag of rice if they win.

Ip Man’s close friend and fellow martial artist Lin accepts the challenge, only to be killed in a match against Miura. Following the news of Lin’s death, Ip Man request a match with ten of Miura’s karate students, pummeling all of them in his barely suppressed fury. Seeing that Ip Man’s skills far exceed those of any of the other challengers, Miura vows to see the Wing Chun master defeated.

It’s exceedingly easy to see why Donnie Yen has become Hong Kong’s reigning action king of the 21st century after seeing “Ip Man”. It’s an even more impressive feat when one considers just how new he was to Wing Chun before this film. Coming primarily from a background of Tai Chi, Wushu, and Taekwondo, the fighting style he displays in the film stands in stark contrast with the kind of action he’s been known for in the past. His kicking skills have always been among the sharpest and most precise of anyone working in Hong Kong and have served as his major calling card throughout most his career.

With “Sha Po Lang” and “Flash Point”, he would introduce grappling techniques gleaned from contemporary MMA into his repertoire and add a dynamic new element to modern martial arts films. For “Ip Man”, he underwent months of classical Wing Chun training, adopting the art’s grounded, straight-forward approach to fighting. You’d certainly never guess he was a beginner, however, on the basis of his performance in the film. Ip Man’s own son and fellow Wing Chun Grandmaster, Ip Chun, served as a technical advisor for the film’s fight choreography, and has publicly praised Yen’s dedication to learning Wing Chun and the ease with which he absorbed the art. 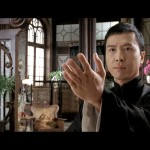 Ip Man always pays his respects to his opponent.

If I go down Im taking you with me

Ive got you right where I want you

I said I want a shoe shine

Ip Man readies his students for the battle ahead

That’s certainly the conclusion anyone with a functioning pair of eyes will reach after seeing Yen’s portrayal of Ip Man. With another Hong Kong action legend by the name of Sammo Hung serving as fight choreographer, the action in the film is among the most potent to emerge from Hong Kong in years. Yen displays a flawless combination of speed, power, and precision with the chain-punching of Wing Chun throughout the film’s many action scenes. Every fight in the film is splendid, but Yen makes choosing a favourite that much easier on the viewer with his duel against ten karate black belts (anyone who makes it past the poor fellow who gets chain-punched into the floor without hitting the rewind button will be the first person in the world who has ever managed to do so). It’s all the more interesting in that it’s the closest Ip Man comes at any point to losing his temper.

Elsewhere in the film, he maintains a calm, peaceful disposition even in combat, that’s completely at odds with his supporting cast, who, it must be said are equally impressive in action. Fan Siu-wong provides a strong enemy for both Ip Man and his fellow kung fu masters to overcome, while Shi Yanneng displays an almost childlike enthusiasm for training alongside Ip Man that compliments the jaw-dropping fighting prowess he displays in his duel with General Miura. As for the film’s villain, Hiroyuki Ikeuchi proves a powerful foil for both the challengers of Foshan and Yen’s Ip Man, a fierce gaze firmly affixed to his face to illustrate his zeal for fighting. The contrast of Chinese and Japanese martial arts is beautifully illustrated throughout the film, yet nowhere more so than in Miura’s climactic duel with Ip Man.

Both the avalanche of Ip Man films of the past several years and the surge in popularity experienced by the art of Wing Chun are directly attributable to this film, and quite deservedly so. “Ip Man” belongs in every martial arts fan’s collection, and will serve as a model for martial arts filmmaking for years to come. Donnie Yen effortlessly moulds Ip Man into his signature role, and it’s one that fits him perfectly. With the combination of his superlative Wing Chun skills and the placid charisma he fortifies them with, at no point do you ever doubt that this is the man who trained Bruce Lee!