Probably Hong Kong’s hardest working actor, Andy Lau plays “Hou Jie”, a warlord who becomes a Shaolin Monk. Lau is a Cantopop singer-songwriter, actor, presenter, and film producer, and has acted in over 160 films, including “Twinkle Twinkle Lucky Stars“, “Infernal Affairs”, and “As Tears Go By”. In 2005, Lau was awarded “Number One Hong Kong Box Office Actor 1985-2005”, his films having earned a total box office of HK$1,733,275,816 from 108 films in that 20 year period, out-grossing even Jackie Chan and Stephen Chow.

Action superstar Jackie Chan plays “Wudao”, the Shaolin cook monk who helps Hou Jie to turn over a new leaf. Early on in his career, Jackie starred as a trainee monk in “Shaolin Wooden Men”.

Former wushu champion turned action star, Jacky Wu Jing is “Jing Neng”, the senior monk. Wu Jing first came to prominence in “Tai Chi Boxer“, and has since made a name for himself in films such as “SPL/Kill Zone“, “Fatal Contact“, and recently made his directorial debut with “Wolf Warriors”, starring alongside Scott Adkins.

A real-life former Shaolin monk, now turned martial arts actor, Xing Yu is “Jing Kong”, the second senior monk. Xing Yu has made a name for himself with his authentic kung fu skills in films such as “Flash Point“, “Ip Man“, “Bodyguards & Assassins”, “Kung Fu Killer“, and played the lead role in “The Wrath of Vajra“.

The popular Chinese actress, television producer and pop singer, Fan Bingbing plays “Yan Xi”, Hou Jie’s wife. She recently made the transition to Hollywood starring as Blink in “X-Men: Days of Future Past”.

Yu Hai, who starred alongside Jet Li in the original “Shaolin Temple” films, appears here as the Shaolin abbot.

Jet Li’s former stunt double Xiong Xinxin plays “Suoxiangtu”, a martial arts expert working for Cao Man. Fans may recognise him as “Club Foot” from “Once Upon a Time in China III”. Chen Zhihui who starred as “Master Chin” in “Fearless” and as “Master Liu” in “Ip Man”, plays “Huo Long”, a rival warlord.

Yu Hai was the Shifu in the original, now he is the Abbot!

The film is set in Dengfeng, Henan, during the turbulent warlord era of early Republican China. An arrogant warlord named Hou Jie defeats a rival, Huo Long, and seizes control of Dengfeng. Huo Long flees to the Shaolin Temple to hide but Hou Jie pursues him. Hou Jie and his men attack and ridicule the Shaolin monks for sheltering the fugitive.

The suspicious Huo tries to set a trap for his sworn brother, Song Hu, but it is in fact Hou who is being set up by his deputy, Cao Man. While fleeing, Hou’s wife and daughter are separated. Hou’s wife is rescued by some Robin Hood-style Shaolin monks, who were stealing rice to help the refugees living near the temple. Hou manages to escape with his daughter, but his daughter is severely injured. In desperation, Hou takes his daughter to the Shaolin Temple, begging the monks to save her life. He is too late and she dies from her injuries. Hou’s wife blames him for the death of their daughter and leaves him. In a fit of grief and anger Hou blames and attacks the monks for his ill fortunes.

Hou becomes disillusioned and wanders near Shaolin, until he meets the cook monk Wudao, who provides him food and shelter. Hou feels guilty about his past and decides to become a monk and atone for his sins. During his stay in Shaolin, Hou learns to mend his ways and finds peace and enlightenment through the study and practice of martial arts.

When Cao discovers that Hou is still alive, he leads his soldiers to attack the Shaolin temple and kill Hou.

With the aid of the Shaolin Monks, Hou must use his Shaolin training to save the refugees and find absolution for the sins of his past.

The Shaolin Monks are sworn to protect their temple

The monks training in time

The monks rob the rich to feed the poor, Iron Monkey style

The final battle is on a grand scale

The martial arts action seen in the original “The Shaolin Temple” film was achieved by employing real kung fu champions in the main roles. The 21st century version has also employed some authentic martial artists in key roles, but takes a much more modern approach to the choreography, with renowned action director Corey Yuen at the helm.

The action kicks off almost immediately as Huo Long is chased by armed soldiers into the Shaolin Temple. After Nicholas Tse is thrown from his horse, he leaps up to fight Xing Yu, giving us some solid Bak Mei/Wing Chun style hand techniques against Xing Yu’s Shaolin wushu style. As Tse brings in the footwork and kicks, Wu Jing steps in with his longfist style.

When Hou Jie is betrayed, Fan Bingbing as his wife, makes a run for it with her daughter. Struggling to fend off four soldiers, just in the nick of time, two Monks dressed “Iron Monkey” style, leap in to save her. The choreography is crisp and fast and even imitates some of the camera angles of the aforementioned “Iron Monkey”.

Andy Lau gets his first taste of the action whilst making his escape in the same sequence. Although never formally trained in martial arts, Andy Lau has given a good account of himself in several movies over the years, and is always convincing in the fight scenes. As Hou Jie, there is no exception, as he takes and delivers the punches and kicks against the attacking soldiers. The fight evolves into a running battle across the rooftops with Xiong Xinxin as the deadly Suoxiangtu. The wirework is more prevalent here as they leap, run and fight across the rooftops with exhilarating pace.

Once on the ground, the action moves into a chase sequence proper, with many horses and wagons. Benny Chan films in a very modern, western-style, and this could easily be a car chase from a Hollywood blockbuster. Using a mix of CGI and practical effects, the wagons slide round corners, and flip and roll when they crash. Hou Jie and Suoxiangtu straddle two wagons to continue their battle, and there are some impressive stunts that wouldn’t be out of place in the “Ben-Hur” chariot race or a Yakima Canutt cowboy film.

Lau and Tse impress in their final fight

Jackie Chan has a great cameo as a Shaolin Cook!

Once Lau joins the Shaolin Temple, there are the typical training sequences. Monks line up in rows, practicing their kung fu routines in time with each other. They pound sandbags and tree trunks, balance on logs with one leg held up to their heads, young monks handstand on stone steps, and carry out chores. The kung fu forms look authentic, and Lau performs them with a good balance of looking like he can really do them, whilst at the same time looking like he is still learning them.

Jackie Chan has a brief “training sequence” of his own as he prepares food for everyone, flipping and chopping the ingredients, whilst spinning and twirling his giant wok and utensils.

To reinforce just how dastardly Cao Man and his henchmen are, the Temple scenes are interspersed with scenes of Nicholas Tse and Xiong Xinxin using their martial arts skills to do particularly nasty and painful things to their rivals.

A major set-piece comes in the form of the Monks deciding they must take matters into their own hands, and they perform a night-time raid to rescue prisoners of Cao Man. Xing Yu gets a chance to display his excellent rope-dart and pole skills, with Wu Jing also using his stylish gunshu (cudgel) techniques. Wu Jing gets an all-too-brief punch up with Xiong Xinxin, and it’s a shame they didn’t get to do more together.

Jackie Chan establishes his action credentials in a tailor-made fight scene. Proclaiming that he has no knowledge of how to fight, he uses his cooking skills to beat the attacking soldiers. In a pay-off from the earlier cooking sequence, the soldiers are flipped, thrown and rolled into dough balls, as Jackie demonstrates once more his inventiveness when given any particular environment. It is also good to see some impressive screen-fighting from the young children monks in this sequence.

In the grand final battle, Xing Yu and Xiong Xinxin get to go toe-to-toe in an epic sword duel, whilst hundreds of monks and soldiers fight all around them. Yu Hai, who never seems to age, still impresses, albeit very briefly, with his genuine kung fu skills as he helps to protect the refugees in his care. Within the temple itself, Andy Lau and Nicholas Tse at last confront each other. Although they are occasionally doubled and there is plenty of wirework, the two actors perform a great deal of the combat themselves to a very high standard.

If Fast and Furious ever do a chase set in the Warlords Era, it will look like this!

As in the 1982 film, the Shaolin burial ground is used as a location 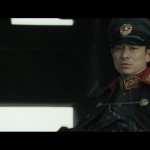 Andy Lau and a young monk practice their form

Attempting to top the 1982 classic “The Shaolin Temple”, was always going to be a tall order. Wisely, Benny Chan’s version takes a different approach. This is a serious, dramatic tale of a man that learns to repent for his sins through his Shaolin training, having suffered a terrible personal tragedy.

Andy Lau gives a richly textured portrayal of a man struggling to overcome his arrogant ways to become a better person. Nicholas Tse is also good value as the young, ambitious and wicked Cao Man. The leads have good support from their co-stars. Jackie Chan’s cameo brings some lightness to the otherwise serious and emotional nature of the film, but also gives him some decent scenes to show that he can act too.

All the cast acquit themselves well in the action scenes. The film is very well shot, with wide angles and camera cranes frequently used. The sets and costumes look impressive and historically accurate in equal measure. The whole production looks and feels like a big budget (by Chinese standards) epic.

So how does it compare to the original? In terms of sheer scale, drama and acting performances, “Shaolin” wins hands down. However, the action scenes tend to over-use wire-assistance, and I feel that perhaps the range of martial arts talents of stars like Wu Jing and Xing Yu could have been used more. At just over two hours “Shaolin” is also just a touch too long. For authentic and diverse on-screen martial arts skills “The Shaolin Temple” is the clear winner.

But if you are looking for a grand martial arts spectacle with real emotional and spiritual depth, “Shaolin” is the one to go for.