Jet Li heads up the all-star cast as “Pang Qingyun”, a military General loyal to the Emperor. This was Li’s first film after declaring that 2006’s “Fearless” would be his last martial arts film. Thankfully, although the aforementioned “Fearless” would prove to be his last “pure” martial arts film, Li still demonstrated in this film and subsequent work that he still has some moves to entertain audiences with.

Qingyun marauds through the enemy positions

Efficient on the battlefield

Set in China in the 1860’s during the Taiping Rebellion, “The Warlords” is based on the assassination of Ma Xinyi in 1870. Loyalist General Qingyun is the only survivor of a battle with anti-Qing rebels. He encounters a poor and starving village, whose inhabitants engage in banditry to survive, where he is nursed back to health by the attractive Liansheng. With his strength regained, Qingyun impresses one of the village bandit leaders, Jiang Wuyang, with his fighting skills.

Wuyang introduces him to his “big brother”, who also happens to be Liansheng’s husband, Zhao Erhu, and Qingyun begins to assist them with their raids. Qingyun convinces his two new comrades to form a loyalist army unit to fight the rebels and feed their own people. The three men swear a blood oath that under the pain of death, they will look out for each other like brothers. Despite their growing loyalties to each other, Erhu and Wuyang are unaware that Qingyun is having an affair with Liansheng.

Their stunning military successes initially impress the governing powers, but as Qingyun’s influence begins to grow, they soon fear him. Qingyun’s actions with regard to how far he is willing to go in order to bring about peace become more and more despotic, leading to differences between the blood brothers. The political and emotional stakes are tested to breaking point leading to tragic sacrifice and betrayal among the three warlords. 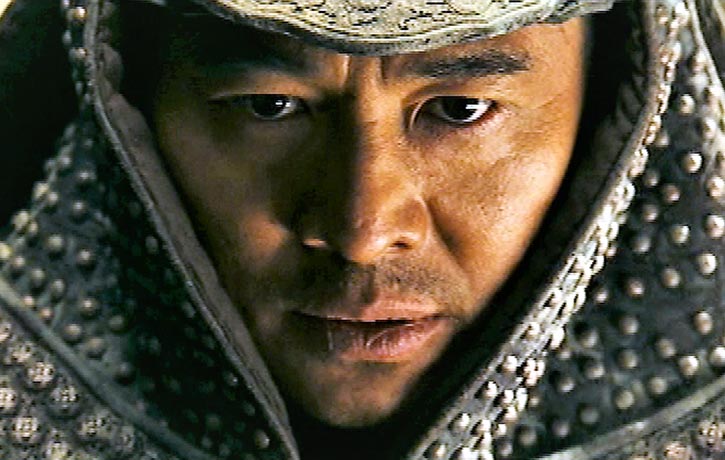 From very early on it is established that the action in this movie will be based much more on the harsh realities of close-up military combat, rather than the balletic beauty of films like “Hero” or “House of Flying Daggers”. Through drifting, misty smoke the viewer is first introduced to a blood-soaked battlefield. There are no flashy choreographed fighting moves here, just raw, brutal stabbings with swords and spears. When Jet Li’s Pang Qingyun first runs into Takeshi Kaneshiro’s Jiang Wuyang, there is a very short but slightly more stylised hand-to-hand engagement.

After the frantic skirmish of a bandit raid, the film delivers its first major set piece. The scale of this battle is truly epic; what looks like thousands of soldiers fight hand-to-hand and on horseback. Archers rain down arrows, musket fire scythes down charging soldiers, and cannons blow entire ranks of men apart. The stuntwork and horse falls here are hugely impressive. Jet Li looks particularly determined with a constant steeled look in his eyes. You wouldn’t want to run into this general on the battlefield! He initially fights with a pudao, lopping off limbs as he marauds through the enemy positions. Although there are recognisable weapons techniques from traditional martial arts forms, there are none of the superfluous spins and twirls that you might expect from a Jet Li fight. Andy Lau and Takeshi Kaneshiro are equally proficient and efficient with their swords as they hack a path to their blood brother’s side.

The film’s conclusion is a rain and mud-soaked duel which, although it features much more traditional kung fu choreography, remains grounded in the bloody and brutal reality of the action preceding it.

Qingyun joins the bandits on a raid

During a raid Qingyun saves Wuyang

Up to 500 Stunt Horses were used

This is first and foremost a drama film, with the script often falling into melodrama. Thankfully the excellent acting performances of the four leads just about manage to rein in the occasional excesses of the screenplay. Although action fans should enjoy the battle scenes, those seeking wall-to-wall martial arts fights will be left wanting. On the whole, the combat scenes give a real sense of the danger, sweat, blood and dirt of close-quarters warfare. The sets and costumes all look appropriately authentic and the huge scale of many of the scenes, are testimony to where, aside from the superstar wages, much of the $40m (US) budget went. My only criticism would be that the shaky cam-style editing and washed-out colour grading detracts slightly from this.

If you enjoy a movie that is a little more layered and almost Shakespearean in its story-telling, you will find “The Warlords” a rewarding watch. Jet Li has continually grown as a dramatic actor and gives one of his finest performances, ably supported by the ever reliable Andy Lau. The action scenes when they come are among the grandest you will see in a film of this nature, and the emotional highs and lows will stay with you long after the credits roll…

The 3 Warlords start to have their differences

The battles are epic

Seen “The Warlords”, what did you think of it? What are your fave Jet Li and Andy Lau films or action moments that feature them? Let us know in the comments below, join in the conversation on Facebook  and follow us on Twitter  (don’t forget to check out our previous movie reviews)!