Jackie Chan is a global icon, an action superstar that hardly needs an introduction, with over 200 movies to his credit and 56 years in the industry, he’s still going strong!

We were very fortunate to catch up with the non-stop Jackie recently to discuss his latest movie “Kung Fu Yoga” which releases in the UK today!

“Jack (Jackie Chan), an internationally-renowned archaeology professor and his team are on a grand quest to find a lost ancient Indian treasure when they are ambushed by a team of mercenaries and left for dead. Using his vast knowledge of history and kung fu, Jack leads his team on a race around the world to beat the mercenaries to the treasure and save an ancient culture.”

Well Jackie, welcome to Kung Fu Kingdom! Thanks so much for taking some time out to share with us. We know you’re a busy man so let’s discuss your latest movie “Kung Fu Yoga”!

How did the idea for “Kung Fu Yoga” first originate, how does ‘kung fu’ and ‘yoga’ connect with each other in this movie?

Thank you! Well, as you know, in kung fu, explosiveness of action is necessary to do the most damage in the shortest time. But the moves in yoga are slow, focusing on the softness and flexibility of the body. In their own way, yoga moves are also at full strength: stable and balanced.

When a martial arts practitioner learns yoga, the training of the mind combines with their physical strength to empower his or her willpower. Kung fu and yoga therefore complement each other. Both kung fu and yoga teach one how to concentrate, and to keep one’s body and mind in balance. They both train one to develop a clear mind and to feel one’s inner joy, protecting one’s mind from outer influences. 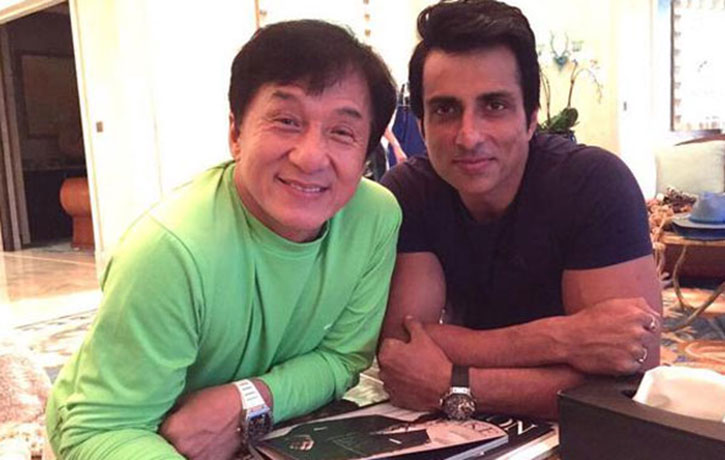 Do you practice yoga yourself? Yoga is deeply connected with self-knowledge and enlightenment, can you tell us briefly, what your philosophy of life is?

I don’t practice yoga but I think it’s good for people to practice it. I agree that kung fu and yoga are tied to self-knowledge and enlightenment.

For my philosophy, I would just say enjoy every moment of your life. Accept yourself and be young at heart. I still go to the gym every day and run for an hour. I believe in being “happy go lucky”!

You have worked very successfully several times in the past with director Stanley Tong (who you share your birthday with) and your co-star Eric Tsang. Did your familiarity with each other help the process of making “Kung Fu Yoga”?

Yes, working with each other over the years, we have developed a special close rapport and Eric is an old friend. Stanley knows me so well that he knows what plots and action choreography appeal to me. We know each other so well that as soon as one of us speaks, the other has already guessed the complete sentence. When Stanley sets up the camera, I immediately know how the scene is to be shot.

“Kung Fu Yoga” marks your fifth collaboration with director Stanley Tong. What interesting stories can you share about making the film with him, and reuniting 12 years after your previous collaboration, “The Myth”, the first film you made in India in 2005?

We have no secrets. We are honest with each other. For instance, if I don’t like something, I’ll tell Stanley immediately. He’ll even tell me if I put on weight, asking me to slim down! Almost nobody else can force me to do anything, but Stanley will push me to do difficult stunts. I’m grateful of his demands otherwise I might slack off. As an action actor, if I stop practicing for even 24 hours, I won’t be able to finish action on the next shooting day.

Aside from being filmed in India, are there any other connections between the storylines contained in “The Myth” and “Kung Fu Yoga”?

The historical backgrounds are similar, do check it out in the cinema to find out!

“Kung Fu Yoga” is a Chinese-Indian co-production with popular Bollywood co-stars, Amyra Dastur, Disha Patani, and Sonu Sood – what fun or unusual Chinese/Indian cultural contrasts did you experience or realise when working with them and Indians in general?

We shot in Iceland this time, I guess it was especially difficult for them, as India is very hot and they’re not used to such cold weather. There are crew members from all over the world in this film, so in our spare time, we would chat together in English and sometimes practice kung fu together with the JC Stunt Team. The atmosphere was always harmonious and brimming with positive energy. Despite the different nationalities, all the cast and crew members are like one big family.

What one fun or interesting story can you share about making the film?

In Iceland, there is a scene in which I needed to dive into icy water with Disha Patani. I led her to a waterfall for a better shot. However, we lost our footing in a hole that appeared due to water erosion and hadn’t put our life jackets on yet – the river’s current was so forceful that we could’ve been carried away! Luckily there was someone close by who pulled us to safety just in time.

Seeing how we had so recklessly broken the rules, the diving instructor almost stopped the shoot. It was my mistake. I always want to create a more exciting scene, but I should think more about safety in the future.

Which was your favourite exotic location while working on “Kung Fu Yoga”, and which was the most challenging environment to work in?

I like to find different shooting locations. I always want to introduce new things to audiences. This time we shot in China, India, Iceland and the United Arab Emirates. It’s difficult to say which was my favourite as they each have their own characteristics. Perhaps Iceland was the most challenging for me, because I prefer to be hot than cold!

There is a lot of physical comedy in this film. Do you still look to your heroes such as Harold Lloyd and Buster Keaton for inspiration when composing these types of scenes?

I always try my best to bring something new to each film; I don’t like to repeat myself, I like to give the audience a surprise. My audience always expect authenticity from me and authenticity gives films power. Nowadays the audience is different; they not only want great action but also a great story. Spending more time on the plot does help the action sequences to be more integrated and memorable.

You famously feature the “NG’s” (“no goods”) in the end credits of your movies. Were there many in “Kung Fu Yoga”? What was the funniest or most painful?

Definitely go to the cinema to check that out! There were so many funny and unforgettable things that happened during this shoot. The luxury car crashes made me feel real pain! In Dubai, we borrowed many cars, including Ferraris, Bentleys, Lamborghinis and limited edition Bugatti Veyrons and McLarens; three of which are among the most expensive cars in the world!

Since the local government and royal family offered their full support to the film, the cars were on loan for free, but at one point, the bumper of one of the McLaren cars was damaged. We were so worried, not only by the expense of fixing the bumper, but also because of the film continuity. But a new McLaren was delivered the very next day, wrapped in a yellow paper coating to conceal its blue paint. The Dubai government cordoned off streets for the shoot. I was and am deeply moved by the sincerity and support of the government.

How are you still able to make all these movies with a smile on your face even though you’ve broken every bone in your body?

Well, I just enjoy every moment of my life! I am happiest when filming.

Jackie with crew on set of Kung Fu Yoga

Do you have any plans or ideas for “Kung Fu Yoga 2”?

I’d love to make a sequel, because the shooting experience on this film was so great. However, to start a new film is not easy, with all the collaboration required with different parties etc but if there are good ideas for a follow-up, why not?!

What other projects do you have coming up after the release of “Kung Fu Yoga” and for 2017 overall?

You will see me in another film called “The Foreigner” coming later this year. I will also shoot different movies. Movies are my life and I will never stop shooting!

Well thank you Jackie, it’s truly been an honour and a pleasure having you with us here on Kung Fu Kingdom. Thanks for giving our readers a fresh behind-the-scenes look at “Kung Fu Yoga”, we wish you all the best with it. Keep in touch and we look forward to “The Foreigner” and your other movie projects in 2017 too!

Kung Fu Yoga is released today in the UK! Also check out Jackie’s Facebook and Twitter pages as well as his main site! Stay tuned for our full review coming soon!

This feature has been made possible by the KFK Team with kind input and contributions by Glen Stanway, Brad Curran and Raj Khedun.