Jackie Chan has drawn much attention in recent years for his stated goal of being taken as seriously as a dramatic actor as a daredevil action-star and it seems Sammo Hung has been on a similar pursuit in the last half decade.

In aim of this, Sammo directs and stars in “The Bodyguard”, released in certain quarters as “My Beloved Bodyguard” to avoid confusion with Yue Song’s identically titled film, (itself adopting the alternate title of “Super Bodyguard” for the same purpose).

With a sprinkling of Chin Na (aka Qinna; joint lock technique) driven fight sequences here and there, one of which is the best Sammo’s done in ages, the film is arguably his answer to “Police Story 2013″ – first and foremost a drama of a man just trying to fit in and put his past behind him, only for outside forces to deny him the opportunity.

In addition to directing the film, Sammo Hung portrays Ding Hu, a dementia-stricken ex-cop who finds himself inexplicably fulfilling the role that was once his professional for a young girl named Cherry, played by Jacqueline Chan, while Andy Lau portrays her father, Li. Zhu

Yuchen plays the vicious catalyst of the whole affair, the local mob boss Choi, while several big Asian stars drop in for cameos throughout the film, from Eddie Peng to Tsui Hark to Sammo’s old Peking Opera compatriot, Yuen Biao.

In another life, Ding Hu was an officer for Beijing’s Central Security Bureau, but his dementia has left him to lead an unassuming life in his retirement. Unfortunately, his once simple life is suddenly complicated when his neighbor Li is conscripted by Beijing’s local mob boss, Choi, to rob a Russian gang leader in order to pay off his debts incurred by his compulsive gambling.

Li Andy Lau has put his daughter in serious danger.jpg

The mission only succeeds in Li making himself and his daughter Cherry a target for the Russian mob, as well as further angering Choi due to his inability to pull it off discreetly.

Ding finds himself in the crossfire and having spent years saddled with guilt after his own granddaughter’s disappearance during a hiking trip, comes to Cherry’s defense during a kidnapping attempt by Choi’s henchmen and ultimately is forced out of retirement to assume the role of a bodyguard once more.

Sammo really seems to have had a similar aim in mind in making “The Bodyguard” that Jackie did with “Police Story 2013”. While he eschews that film’s overly grim tone, Sammo is channeling the same sort of war-weary veteran cop character who’s seen it all and wants nothing more than to take the path of least resistance at every opportunity.

Li thinks hes found a solution for his financial woes.jpg

Ding Hu pays a visit to the doctor.jpg

Going for the shoulder dislocate OUCH.jpg

It’s also primarily a character drama with a side order of action rather than a wall-to-wall fight fest. Sammo’s certainly got plenty of street cred in the latter and in shifting gears to a less adrenaline-fueled story, he turns in a genuinely solid performance of a semi-shut in, senile old pacifist with as big a heart as Santa Claus himself. Heck, based on his portrayal of the gentle, kindhearted Ding Hu alone, Sammo should at least be on the shortlist for every Kris Kringle role in the world for the foreseeable future.

“The Bodyguard” is very much a quality-over-quantity affair when it comes to butts being kicked, but Sammo doesn’t disappoint when the story calls for Ding Hu to stand his ground. In recognition of the age and physical state of his character, as well as his professional background, Sammo predicates Ding Hu’s fighting style mainly on restraining techniques from Chin-na and throws from Shuai Jiao (another point of comparison with “Police Story 2013”). Sammo actually drifts into Steven Seagal territory with the amount of times he snaps or dislocates a limb, especially during his initial rescue of Cherry from Choi’s henchmen and it actually brings to mind just how underutilized the extensive joint-manipulation and grappling techniques of these arts seemingly are by Hong Kong and Chinese filmmakers except in movies like this where the protagonist is a battle-hardened veteran.

The power of Chin Na is clear right here.jpg

The dearth of action makes the film slog a bit in the middle, but considering that this was likely Sammo’s intention as a parallel to his character’s more passive nature, it’s hard to determine whether this should qualify as a criticism or not.

In any case, the finale most certainly gives you your money’s worth with Ding taking on Choi’s knife-wielding henchmen and snapping any bone or ligament he can get his hands on. It’s just about Sammo’s best fight sequence since “Ip Man 2”, and features plenty of x-rays of bones being bent in the wrong direction just to drive home the kind of damage a China-na master can deliver. One of our heroes finishing moves, in particular probably should have been accompanied by the word “Fatality” popping up onscreen, since it wouldn’t look even slightly out of place in “Mortal Kombat”!

With “The Bodyguard”, Sammo stretches his legs as an actor and a director, while peppering in just enough bone-crunching combat to get your pulse racing at the right moments. 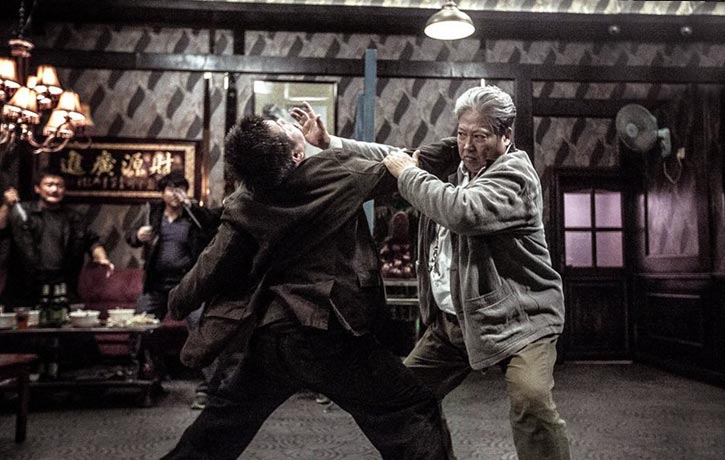 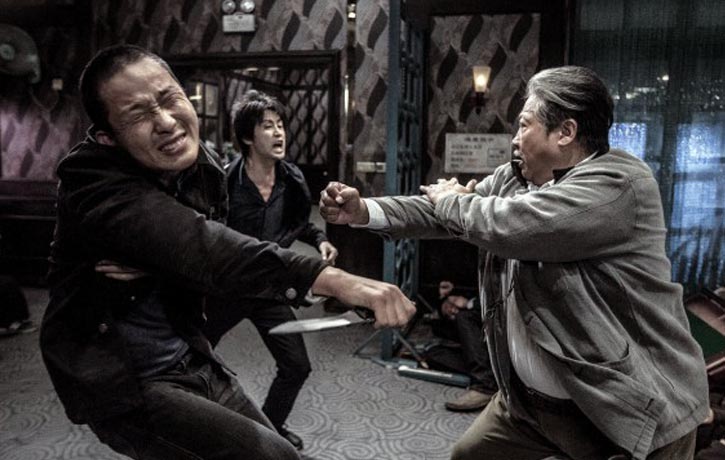 It’s definitely not for the viewer looking for a nonstop action fest, but fans of Sammo’s filmography should give it a look to see his versatility in a more dramatic performance and certainly to see one of his best single fights in years in the last twenty minutes. More Chin-na and Shuai jiao in Chinese action movies, please!