Nicholas Tse is a Hong Kong actor, singer, songwriter, musician, entrepreneur, and martial artist, who plays widowed cop “Chan Chun”. He originally learned martial arts from Philip Ng, Andy On and Sammo Hung especially for film and television. He is best known for his roles in “Young and Dangerous: The Prequel”, “Gen-X Cops”, “New Police Story”, “Shaolin”, “The Storm Warriors”, and “Bodyguards and Assassins”. Tse was the third highest earning actor in Hong Kong with 150 million HKD (19.3 million USD) in 2014.

Jaycee Chan plays rookie cop “Wai King-ho”. He is of course the son of Hong Kong action legend Jackie Chan. He made his film debut in “Twins Effect II” and has also had some success as a singer in Taiwan. Shawn Yue plays Police Inspector “Carson Fong Yik-wei”. Yue is a former model who moved into acting and singing. He has had notable roles in the “Infernal Affairs” trilogy of films, and also “Reign of Assassins”, “Initial D”, “Dragon Squad”, and “Dragon Tiger Gate”.

Wu Jing is in top form for the fight scenes

Wu Jing gets his kicks again

Wu Jing at his menacing best

Wang Xue Mei should be in more action films

Wang Xue Mei in a shootout reminiscent of Heat

There are notable appearances from Andy On, Philip Ng, Ken Lo, Vincent Sze, Wang Xue Mei and a cameo from Arron Kwok.

A criminal gang who call themselves the “Ronin Gang” attack an armoured truck with explosives on a busy city street. The explosion kills several civilians, one of whom is the fiancée of Detective Chan Chun.

A team of police officers, led by Inspector Fong Yik-wei, are injured or killed by Tien Yeng-seng and the Ronin Gang, when he stops their suspicious vehicle. Chan and Fong vow to hunt down the gang and seek vengeance for their personal losses.

Wai King-ho is a rookie cop whose older brother, Wai King-tat, also a police officer, has been missing for six months. It is alleged that his brother has become part of the Ronin Gang while undercover, and Wai King-ho is suspended from duty due to his connection to his now wanted sibling. Believing he may lead them to his brother and subsequently the gang, Chan and Fong team up with Wai.

As the lines between the criminals breaking the law and cops seeking justice become blurred, our three heroes face danger at every turn, discovering corruption at the highest level, leading them to an explosive final confrontation at police headquarters.

The rooftop chase is thrilling

The actors performed many of the impressive stunts themselves

I have used the word “explosive” more than once in this review, and it probably best describes the action both figuratively and literally.

The opening scene is a mixture of practical and digital effects delivering a huge explosion in a busy Hong Kong city street. The ensuing shoot out between the cops and the heavily armed gang is reminiscent of the one in Michael Mann’s “Heat”, and is obviously heavily influenced by that classic. The scene introduces the gang led by a menacing Wu Jing. They are cold-blooded and ruthless, and have no qualms about who is killed or injured as they get their job done.

Shawn Yue is introduced as he shakes down a local loan shark in an upmarket restaurant. The inevitable fight has him throwing, kicking and punching the loan shark’s gang members through every breakable and glass surface in the restaurant. There is a real energy in the choreography, and it sets the standard for what is to follow.

Nicholas Tse gets in on the action in a thrilling chase on foot through the streets of Central Hong Kong. There are breathtaking stunts as he leaps over moving cars, and is even hit mid-leap by a double-decker bus! Tse catches up with his suspect in the back of a taxi, allowing for some inventive fight choreography in the confined surroundings.

Some of the explosions are huge

Not a single pane of glass survives the film

Nicholas Tse is exceptional in the action scenes

When Shawn Yue’s team stop the gang in their car, it gives Wu Jing his first opportunity to show us what he does best. Literally leaping into action, Wu Jing demonstrates he really is the master of being the bad guy, as he batters poor Shawn Yue with the same cold, but spectacular efficiency that he displayed in “Sha Po Lang/Kill Zone”. This scene also has Andy On being no less brutal with a dizzying array of kicks. Actress Wang Xue Mei as the only female member of the gang, is just as deadly as the men. Utilising her high-heeled boots as vicious weapons, she kicks her way through the remaining members of the police team.

Tse’s first encounter with the gang leads to a shootout followed by a rooftop chase that again features an impressive mix of stunts and high energy fight choreography. Although there is some obvious wirework, you can still feel every blow as bodies bounce off kicks and fall off buildings.

Unfortunately for Jaycee Chan, being the son of one of the world’s leading action stars probably means a lot is expected of him in a film of this nature. His initial appearance is more of a dramatic one, as he tries to save a homeless man who has fallen ill. Jaycee’s opening action scene comes about a third of the way into the film when he finally hooks up with Tse and Yue. I have to say I was pleasantly surprised the first time I saw him in action. He may not quite have the same rhythm and abilities as his famous father, but he is no slouch when it comes to having a bust up with a gang of thugs in a teahouse! The stuntmen look like they are being paid by the bruise, as they bounce off balconies and crash through every bit of glass or furniture on screen. 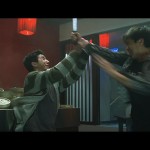 Invisible Target gives you plenty of bang for your buck

I know you got sole

Holding on for dear life on a speeding car

He can be gotten to

The route to the extended finale is littered with confrontations, shootouts and explosions. Each character gets their own little set-piece; Chan faces off with Andy On, Yue has a high-kicking duel with Wang Xue Mei (I can’t understand why we haven’t seen her in more films?!), and Tse initiates the final battle with Wu Jing. Wu Jing steals the show once again in the extended showdown with Chan, Tse and Yue. The skills and choreography on display just about compensate enough to forgive some of the wire-enhancement and digital effects used.

Much like a Jackie Chan film, the end credits reveal some behind-the-scenes footage of the action being filmed. It shows that the stars really did perform most of their own stunts, and even though they maybe attached to a wire, they really are ricocheting off buildings and vehicles, and for one scene in particular, they really are on fire!

“Invisible Target” is like a love-letter to the Hong Kong martial arts cop movies of the 1980’s. Just like in old favourites “Police Story” or “Yes Madam“, not a single pane of glass survives in a fight scene. The stunt work on display looks to be some of the most dangerous and bruising since the heyday of Jackie Chan’s early “Police Story” films. There are pyrotechnics and large explosions throughout, giving the film a glossy, “big-budget” feel.

Director Benny Chan shoots and edits the action sequences exquisitely, using a good mix of wide and medium, dolly and crane shots, and even top down views. Each set-piece feels frantic and energetic, without continuously resorting to using a shaky cam, jump cuts and tight shots.

Wu Jing is at his menacing, brooding best as the unhinged villain. Jaycee Chan brings charm and sympathy to his role as an innocent rookie, and manages to impress in his fight scenes. Nicholas Tse, Shawn Yue and Andy On are all exceptional in the action sequences.

Even when wires are used the stunts can still be impressive

Even the fairground isnt safe

Chan Chuns fiancee is killed in the robbery

Andy On is confronted by Jaycee Chan

All three heroes are needed to take on Tien Yeng seng

A lighter moment and a compromising situation

The Cine Asia/Dragon Dynasty two-disc DVD has lots of extras including “making of” documentaries, interviews, deleted scenes, and an insightful and entertaining commentary from Bey Logan, who is joined on this occasion by Jaycee Chan, Shawn Yue and Andy On.

So a modern classic then? Not quite. It’s not without its flaws; the wirework and digital effects are sometimes too obvious and cheapen what are otherwise superb action scenes. The main cast are all decent actors, but the script is pretty awful, and wastes far too much time driving home the clichés of the brotherhood of cops/gangsters. There are a few cringe-worthy scenes and they push the total running time to over 2 hours, when this could have been a nice, compact action film of 90 to 100 minutes. Benny Chan may be great at action but, in this film, falls flat on drama!

If you yearn for the golden days of contemporary Hong Kong action films, this comes pretty close. “Invisible Target” gives you plenty of “bang for your buck”, and it delivers it with a youthful energy and plenty of style.