An apocalyptic cross between “Resident Evil” and “The Raid”, starring Andy On and directed by Joe Chien.

Andy On stars as SWAT Team member “Andy”. He has trained in martial arts with Nicky Li and the Jackie Chan Stunt Team, kickboxing legend and movie fighter Billy Chow, and with his good friend and fight co-ordinator in this film, Philip Ng. Andy On is best known for his appearances in “New Police Story”, “Invisible Target”, “True Legend”, “Once Upon a Time in Shanghai” and “SPL II: A Time for Consequences”. Jessica Cambensy, also known as Jessica C, is a model and actress who plays “Jenny”. She has previously appeared in the kung fu/volleyball comedy “Beach Spike”, and also in the Jaycee Chan comedy film “Double Trouble”.

Michael Wong stars as dodgy cop “Captain Ma”. He has had a long and varied career in Asian cinema since the eighties, appearing alongside the likes of Jackie Chan, Brandon Lee, Donnie Yen, Chow Yun Fat and Jean-Claude Van Damme. Fluent in English, Cantonese and Mandarin, he made his name in films such as “In the Line of Duty IV”, “Beast Cops”, “Legacy of Rage”, “Thunderbolt”, “Knock Off”, and “From Vegas to Macau”. Taiwanese actor Jack Kao plays “Wu Ming”, a school teacher caught up in the madness of the zombie outbreak. Jack Kao worked with director Joe Chien in his previous horror film “Zombie 108”. He has appeared in the all-star Hong Kong movie “Island on Fire”, which featured Jackie Chan, Andy Lau, Sammo Hung, Tony Leung Ka-fai and Jimmy Wang-yu, in Jackie Chan’s “The Shinjuku Incident”, and more recently in John Woo’s epic drama “The Crossing”. 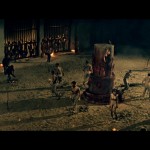 Wu Ming is the boss now

Wu Ming is a changed man

Philip Ng plays “The Brawler” and is also the Fight Coordinator for this film. He has trained in Wing Chun Kung Fu under the late Sifu Wong Shun-Leung, and is a 6th generation disciple of Choy Li Fut Kung Fu, trained by his father, Sam Ng. Philip has also trained to a high level in Hung Gar Kung Fu, Taekwondo, Jiujitsu, and Escrima. He has had action roles in films such as “New Police Story”, “Dragon Squad”, “Invisible Target” and “Once Upon a Time in Shanghai”.

In the near future, a high rise building in the city of Taipei is riddled with criminals and drug-users. A batch of contaminated drugs kickstarts a mass zombie-infection throughout the city. Jenny (Jessica C) barely escapes into the building with her life after seeing her drug-dealer boyfriend killed, as his gang become infected and join the growing army of zombies.

In the meantime, a police SWAT team led by the corrupt Captain Ma (Michael Wong) arrives at the scene, intent on seizing a stash of drug money for themselves. Only heroic “good cop” Andy (Andy On) has his doubts about his team’s motives.

As the zombies ravage the building, the SWAT team fragment in different directions, and Andy and Jenny must rely on each other to survive.

One year later, and the remaining humans are forced to live underground. Society has broken down and those who hold the power, pit humans against zombies in a vicious gladiatorial arena game.

There are some genuine horror moments

The final fight is the highlight 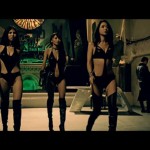 The female characters are heavily objectified

The CGI can still be horrific 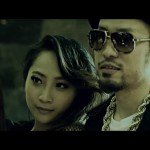 The building is riddled with criminals

This film certainly has plenty of action, but this is more of a “zombie flick”, than a martial arts movie.

The initial outbreak has the drug gang fighting off naked zombie Asian babes (no, really), using lots of CGI effects for the zombie’s looks and the inevitable blood splatter. This doesn’t make the effects any less gory, and there are plenty of brains and body parts on display as the various victims get mauled apart in various ways.

In a blatant rip off of Gareth Evan’s “The Raid: Redemption“, the police SWAT team arrive. As they storm the drug-pusher’s apartment, CGI effects are heavily used for the gunfire and bullet-hits. When the drug bust takes a turn, we get our first glimpse of Philip Ng’s fight choreography. The fighting is swift and brutal, much like “The Raid”, and gives actor Michael Wong a brief chance to show us that he still has some moves.

As the SWAT team are forced to face the zombie hordes, the classic concept that only a headshot can stop them is employed. Most of this scene is just like watching someone play the classic Sega arcade game “House of the Dead”, as corridors full of zombies are shot.

Some scenes are reminiscent of Segas House of the Dead 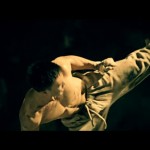 Philip Ng is the Fight Coordinator

Only a headshot will do

It becomes much more interesting when Andy On and one of the gang are separated, and have to fight their way through the corridor using only their fighting skills. The headshot rule still applies, and fists, elbows, knees and feet are all fully engaged as the zombies’ faces and heads are cracked, crushed, shattered and yanked apart.

As the rampage continues, Jessica C has a brief moment where she impales a towel rail through a zombie’s head, and a teacher played by Jack Kao has a life-changing battle when Michael Wong inadvertently brings the infected into his apartment. In a rare amusing respite, an old man reliant on his Zimmer frame to walk, turns hero as he takes a chainsaw to the attacking masses!

The final act of the film features the best of the action, as it becomes a sort of martial arts/zombie version of Ridley Scott’s “Gladiator”, albeit with the undead replacing the tigers of that classic. Sledge hammers, poles, axes and spades are incorporated into the brutal choreography, with plenty of zombies as fodder. The main final fight between Andy On and Philip Ng is probably the highlight of the film. Bringing on MMA-style choreography, they fight atop and inside a derelict bus as hundreds of zombies surround them. 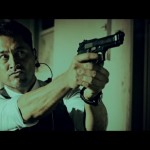 Jessica C spends most of the film in her bra

Where do I start with this one?

Fans of the zombie genre will enjoy some elements of this film. It packs in plenty of the established folklore and clichés, with the occasional tense horror moment. There is plenty of gore, and a lot of bare breasted zombie women.

Most of the action scenes are fairly solid, but the mid and tight shot shaky-camerawork occasionally lose some of the good choreography. It’s a fun notion to pit martial arts against a zombie holocaust. For the most part however, the CGI effects and shaky-cam, edgy style filming make most scenes look like a computer game.

The film itself is almost two distinct movies, with the first hour being a fairly straightforward zombie-survival story that shamelessly rips off “The Raid”, with the final 30 minutes or so being a dystopian, “Mad Max Beyond Thunderdome” type of film, with about two half-decent action scenes. Bizarrely the dialogue throughout randomly switches between subtitled Chinese and English language, sometimes in the same conversation!

Human versus Zombie becomes a sport

Get off my bus

Digital effects were used for most of the action scenes

I know this is a B-movie style exploitation film, but the depiction of women in this film is appalling. The early leering shots of the scantily clad or naked girls who become zombies, the unnecessary forced lesbianism, and even a rape scene later on, are in the poorest taste. Jessica C’s casting seems to be based solely on her bra size. Even in the closing credits, for a film that features very little humour, there is an attempt at a comic scene with a guy groping a girl’s breast as he tries to seduce her.

Drunk teenage boys will probably love this film, and fans of something like the similarly-themed Spanish horror film “[REC]” may also yield some enjoyment from the first half of the film.

For me, I’m still waiting for Andy On to fully realise his martial arts action star potential!

Axe kicking his way out of the arena

Andy On is in great shape

Andy has his doubts about the SWAT Teams motives

Andy and Jenny need to rely on each other to survive