Bruce Lee The many hands of Bruce Lee..

Bruce Lee Taking on two at a time..

Bruce Lee Squaring off with a formidable foe

Bruce Lee On red alert…in the room of mirrors..

Bruce Lee Lee measures it up.. 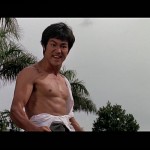 Why Stretch?  Bruce Lee’s Rationale and Top Reasons To Stretch

These stretches are performed as a warm up by most martial art schools today. These were also Bruce’s standard stretches:

I remember many times my father, Ed Parker, saying that pound for pound, Lee was the best martial artist, he´d ever seen. –Ed Parker Jr.

Bruce Lee is my Idol.  I need to learn some techniques of Bruce Lee, especially the quickness of his hands and legs. –Manny Pacquiao

I wouldn’t have put a dime on anyone to beat Bruce Lee in a real confrontation. Bruce Lee was the best street fighter I ever saw, even to this very day, and not just pound for pound — but against anyone in a real fight. -James Demile 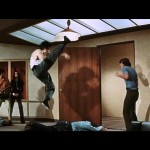 Bruce Lee Kicking the lights out

Bruce Lee A warning for the boss

Kung-fu Kingdom is back!