The world’s most famous Wing Chun master returns for one last, big screen battle in “Ip Man 4: The Finale”, and it’s a fond, emotional farewell indeed for the millions around the world who have followed his adventures since the game-changer that was 2008’s “Ip Man”.

Packed to the gills with all the chain-punching action that fans of the series crave, “Ip Man 4” also zeroes in on the anti-Chinese prejudice faced by its namesake and his legendary apprentice in a way that is at once timeless and topical. With Donnie Yen and Danny Chan in full command of the legends of Chinese culture they portray, “Ip Man 4” also grants action aficionados a long-awaited wish – the pairing of Donnie Yen and Scott Adkins in a showdown for the ages!

Donnie Yen returns once more to his now signature role of Ip Man, famed Wing Chun Grandmaster and mentor to the legendary Bruce Lee, who himself is once again portrayed by the also returning Danny Chan.

Wu Yue plays Ip Man’s fellow kung fu teacher, Wan Zong Hua, with Vanda Margraf portraying his daughter, Yonah, who deals with prejudice and bullying from Becky, a cheerleader at her high school played by Grace Englert. Her father, Walters, played by Nico Amedeo, proves to be a major adversary to the local Chinese community.

However, the real enemies of our hero emerge in the form of Marine drill instructor Barton Geddes, played by Scott Adkins, and his unit’s tough-as-nails martial arts instructor Colin Frater, played by Chris Collins, while Hartman Wu, one of their soldiers played by Vanness Wu, proves to be a great ally to Ip Man.

Barton Geddes is a tough as nails commanding officer

Ip Man holds his own 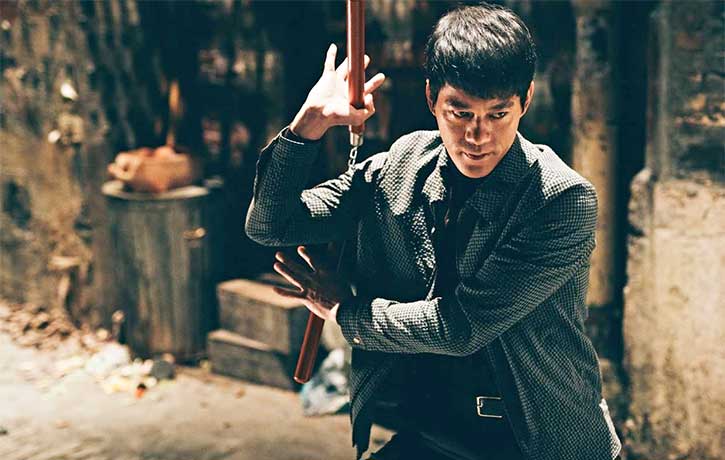 Bruce Lee is ready to roll

In 1964, Ip Man does his best to raise his rebellious son after the death of his wife, while keeping his recent cancer diagnosis a secret.

The constant school fights Ip’s son is involved with leads Ip Man to travel to San Francisco to try to enroll him in an American school. Ip Man’s most famed student Bruce Lee has also risen to prominence with his unconventional teaching methods and performance at martial arts events in San Francisco.

However, when Ip Man intervenes to rescue the daughter of a local kung fu teacher from school bullies, it sets off a chain of events with the entire local Chinese community coming under fire. The conflict is further compounded when Marine instructor Barton Geddes seeks to purge all Chinese influence from his battalion after one his soldiers, Hartman Wu, proposes incorporating Wing Chun into their training, and soon comes to see Ip Man himself as a target to be eliminated.

Barton Geddes wants no Chinese influence in his unit

Has it really been eleven years since Ip Man first chain-punched his way into the hearts of martial arts fans across the globe? You certainly wouldn’t guess it from Donnie Yen’s continued command of the role every second he’s onscreen, but “Ip Man 4” does make the famed Wing Chun master vulnerable in a way that he’s never been before with his cancer diagnosis.

Though he remains a dominating forced against his opponents and a sage-like presence when explaining the philosophy of Wing Chun to the unfamiliar, the movie also sees him begin to genuinely lose his footing for the first time. He’s visibly more affected when he takes a hit, and his situation leaves him irritable with his son’s rebelliousness, knowing that he’s now living on borrowed time while trying to keep his poor health out of sight.

On that note, the movie also gives more prominence to Ip Man’s relationship with Bruce Lee, now well on his way to becoming the legend he would go on to be remembered as decades hence. Danny Chan’s obviously every bit as skilled as embodying Bruce Lee as Donnie Yen in his portrayal of Ip Man, yet “Ip Man 4: The Finale” is home to what is arguably his finest moment in his numerous portrayals of the Dragon.

His students, challenged by a group of Karate practitioners outside of a diner, is where “Ip Man 4” completely slams on the brakes and turns into a Bruce Lee movie seeing Ip Man’s famed disciple unleashing and battling them all single-handedly, only for a new enemy to literally emerge out of nowhere to challenge Bruce one-on-one. The film may mark the swan song for Ip Man, but it still makes time to pay tribute to “Fist of Fury”, “Way of the Dragon”, and “Enter the Dragon” all at once before getting to the meat and potatoes.

While the “Ip Man” movies have always tackled anti-Chinese bigotry head on, the villains of “Ip Man 4: The Finale” set a new standard for that very concept.

Barton Geddes is almost cartoonishly evil in his utter contempt for all things Chinese, while his right-hand man Colin is no less eager to literally kick dirt at the very idea of Marines incorporating Wing Chun into their training.

Naturally, that just makes their duels in the film that much more vigorous, like two egotistical jocks who want nothing more than to walk all over the nerds around them. It’s impossible to not yearn for Ip Man to teach Colin a lesson as he humiliates the entire Chinese community at the local Midsummer festival, and audiences will certainly get their money’s worth when our hero finally takes the stage against him.

As the big bad of “Ip Man 4”, Scott Adkins is ridiculously entertaining as Geddes – a nuclear reactor made into a man in every action scene. Not since Taylor “The Twister” Milos in “Ip Man 2” has our hero had to face an opponent with such fanaticism, and the contrast against Ip Man’s indomitably cool and calm demeanor just makes Geddes stand out that much more as Ip Man’s most vicious opponent to date.

Bruce Lee breaks out the nuchuku

Master Wan also has some moves up his sleeve

The promise of Donnie Yen and Scott Adkins facing off is also made very good on indeed in the final act, with Ip Man having to rally everything he’s got like never before against an enemy who simply doesn’t have an off-switch (and would never lay a finger on it if he did)!

For fans and lovers of Asian cinema, martial arts action, and Chinese folk heroes, it’s been a journey to remember following Ip Man over the course of four movies spanning eleven years.

“Ip Man 4” lays everything that made audiences fall in love with its title character out on the table, taking the series out on an action-packed and emotionally gripping ride. The movie also pays tribute to Bruce Lee himself in the most fun, engaging and exhilarating way possible, while Scott Adkins and Chris Collins are electrifying as two antagonists with fiery hatred in their hearts.

Most of all, Donnie Yen gives one last unforgettable portrayal of the mighty- yet-pacifistic kung fu master, with his contributions to the man’s legacy made all the more palpable in one final, tear-jerking tribute in the final moments of “Ip Man 4: The Finale”.

Ip Man will not stand for any injustice

Two against one Bruce loves these odds

Ip Man rises to the next battle

“Ip Man 4: The Finale” is out in US theaters and UK cinemas today, so treat yourself to an epic dose of Wing Chun Fun this Christmas! Excited to see the final chapter of the “Ip Man” saga come to a close, and with it, the dream-match up between Donnie Yen and Scott Adkins for the first time? What are the most memorable action, fight or emotional movie moments from the Ip Man series in your opinion? Let us know in the comments below; Like, share and join in the conversation with us on Facebook and follow us on Twitter & Instagram.

KEEP YOUR (Wing) CHUN UP this Xmas season, stay connected with us in the FUniverse and get KFK’d with these Greatest Ip Man movie Fights, exclusive interviews, Top 5’s, Top 10’s, gift KFK Official wear to the martial artist in your life and subscribe for more encounters of a close-quarters combat kind this season on YouTube!

KUNG FU KINGDOM would like to wish all our fans, followers and supporters a very Merry Christmas!