With the Marvel films popularizing the idea of crossovers, it was only a matter of time before it happened with legends of kung fu cinema. Director Jeffrey Lau (best known for his comedies with Stephen Chow) assembles four of the greatest kung fu icons in one film: “Kung Fu League”,  featuring Wong Fei-hung, Ip Man, Huo Yuanjia, and Chen Zhen and transports them to modern times.

Lau has a ball with the fish-out-of-water, fourth-wall-breaking humor in this action-comedy where these four kung fu greats must help train a young boy to win a martial arts tournament and maybe even win the heart of his dream girl!

Two actors reprise their roles among the aforementioned legendary kung fu masters. Vincent Zhao as Wong Fei-hung from the fourth and fifth films of the Once Upon a Time in China series and Dennis To as Ip Man from “The Legend is Born: Ip Man.”

Danny Chan Kwok-kwan plays Chen Zhen, a fictional character first made popular by Bruce Lee in Fist of Fury. Taiwanese-American actor and martial artist Andy On portrays Huo Yuanjia and Chen Hsin-hung plays Fei Ying Xiong, the film’s protagonist who is dismayed over his unsuccessful attempts to win over his crush. Madina Memet plays Bao’er, the girl in question.

Cartoonist, Fei Ying Xiong, longs to confess his feelings to the love of his life, Bao’er, when he finishes drawing his first comic book on his birthday, but he isn’t wealthy by any stretch of the imagination. Feeling dismayed, he wishes that the world had heroes that would help the needy, just like in the movies. 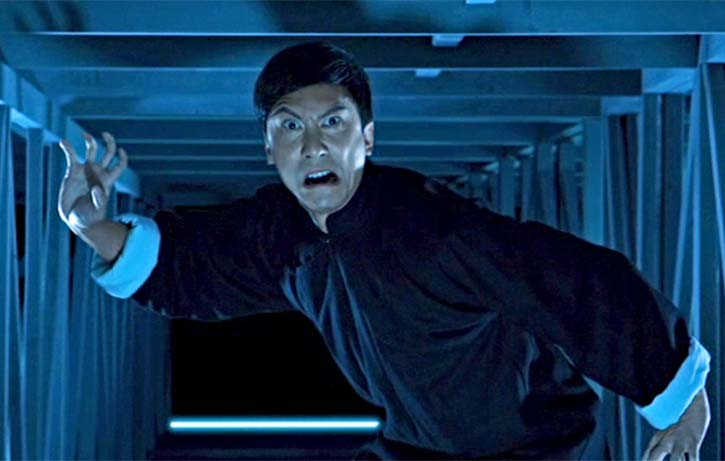 Let me see your war face

Never Give Up Never Surrender

His wish comes true, as four kung fu masters from Chinese history arrive in contemporary times. Hilarity ensues when the four masters try to get acclimated and figure out their current situation. They find Fei Ying, who explains that he wants to win a martial arts tournament carrying a grand prize of 30 million RMB. The four masters agree to train him so that he may win, hoping that helping him with his wish will return them all home.

“Kung Fu League” gives a lot of fan service for any long-time fan of kung fu flicks. The mere concept of having this many legendary characters under one roof is already something worth shouting about. This is essentially the ultimate wish-fulfillment for kung fu aficionados.

All four actors portraying the four masters are martial artists themselves in real life, and that certainly lends to the authenticity of the action, and the film goes to great lengths to accurately represent each master’s respective style.

Vincent Zhao’s background as a wushu practitioner lends itself well to the flashy kicks, acrobatics, and flowy movements as Wong Fei-hung, as he executes a butterfly kick off a table early on in the film. The “Shadowless Kick” is referenced and shown in the film. This technique can be found in the Hung Gar style of kung fu, which Wong Fei-hung was a master of in real life, although this kick has been exaggerated in fiction and media.

Danny Chan Kwok-kwan is actually a student of Jeet Kune Do, (JKD) the martial art and philosophy originated by Bruce Lee himself, so during the fight scenes he incorporates the stances, swift transitions, and lightning-fast strikes.

This is also seen when Chen Zhen begins a fight scene: he usually starts with a straight lead punch, as in JKD and boxing. This punch is meant to be simultaneously the fastest and most accurate strike and can be executed from multiple angles and levels.

As an homage to the films of old, the fight scenes have a lot of floaty, gravity-defying physics. In this day and age this style of choreography may be seen as cheesy, but it’s a tremendous treat if you understand the references being alluded to.

Throw me your shapes

I said no more reshoots

Director Jeffrey Lau was one of the producers on “Kung Fu Hustle”, and that type of comedic action edge is very much intact here. There’s always room for a punchline in every fight and there are some creative jokes with the masters applying their almost superhuman skills in a modern context.

Some of the fights rely heavily on wirework to pull off some of the comically impossible manoeuvres, but the outlandishness of these scenes are clearly meant to be seen as part of the fun adding to the comedy.

There isn’t heavy use of CGI throughout the film, which in this day and age is refreshing; instead relying on the martial arts prowess of the actors for many of the stunts. Toward the end of the film it gets even more out of control – what else do you expect but martial mayhem amongst such a veteran dreamteam.

“Kung Fu League” is a kung fu fan’s ultimate dream. Jeffrey Lau and company nailed the small idiosyncratic details of each master to properly do them justice. The slapstick and situational humor is fits nicely and the film doesn’t take itself too seriously – inviting you to almost join in the fun with them. Disregard stern logic and enjoy the chaos it has on offer, come for the kung fu minutiae and leave with sore ribs from laughter!

All is well that ends well

You wouldnt believe the day I had

Lost and confused in this new world

Sealed with a kiss

Seen “Kung Fu League”, what were your impressions? Which of the old school kung fu masters do you admire the most and who should be brought to life to live action, perhaps in a new and innovative way? Let us know in the comments below; Like, share and join in the conversation on Facebook and follow us on Twitter & Instagram.

ENTER the LEAGUE of FU for more old-school / new- school action with these Top 5’s, Top 10’s, deep-dive interviews, get your KFK gear ON in time for Xmas, and subscribe for Leagues more martial arts on YouTube!)