Action legend Jackie Chan stars in a dual role as the archaeologist “Jack” who has recurring dreams that he is the Qin Dynasty General “Meng Yi”.

Tony Leung Ka-fai plays “William”, a scientist and treasure hunter. As one of Hong Kong’s most popular actors Tony Leung has moved comfortably between action, comedy, martial arts and drama. He has had notable roles in “Bodyguards and Assassins“, “She Shoots Straight”, “New Dragon Gate Inn“, “Ashes of Time”, “Election”, and played Wong Kei-ying, in “Rise of the Legend“.

Popular South Korean actress Kim Hee-sun plays the beautiful “Princess Ok-soo”, who is betrothed to the Qin Emperor, but falls in love with Meng Yi. Glamorous Bollywood star Mallika Sherawat appears as “Samantha”, an Indian girl who takes Jack to her Guru Uncle for some insight into his past life.

During the Qin dynasty, General Meng Yi is tasked with escorting the Korean Princess Ok-soo to China for her marriage to the Emperor. During their journey Korean soldiers ambush them. Having had her life saved in the ensuing battle, the Princess falls in love with Meng Yi.

In present day Hong Kong, archaeologist Jack suspects he is the reincarnation of Meng Yi due to his recurring dreams of his past life. His friend William invites him on a quest to find a rare material that can create a field of zero gravity. They travel to the floating tomb of a Dasar prince in India, where Jack discovers a painting of the princess he has been seeing in his dreams.

After many scrapes and adventures, Jack and William conclude that the anti-gravity material is actually a fragment of a meteorite that fell to Earth during the Qin dynasty. They find the exact location of the Qin emperor’s mausoleum, concealed behind a waterfall. The massive tomb contains the strongest fragment of the meteorite which has a powerful effect on the laws of physics, leading to a unique gravity-defying battle!

The action kicks off with a relatively old fashioned fight and chase on horseback set in the Qin dynasty. It’s quite refreshing to see Jackie Chan fighting with a sword as opposed to him performing sword techniques with a prop, as he tends to do in his contemporary-set films. Of course, Jackie can’t have a “normal” sword duel, he has to have the added peril of being tied to a burning wagon containing the princess, which is hanging over a cliff, Italian Job-style!

Cut to the present day, and Jackie is off with his friend William on a mission to India to find a mysterious rock with unique properties. As they search for their prize in a tomb, two turban-clad guardians attack them. The fight incorporates some quite brilliant choreography with Jackie utilising a sword, a shield and a spear. It is astonishing that even after all these years he still finds new ways to fight with these traditional props. The sequence still manages to maintain Jackie’s particular charm and humour, and even a little non-wire assisted agility. It’s hard to believe that he was already in his fifties when this was filmed!

Jackie really does stand in the middle of a raging waterfall

After a brief flashback to a fists and sword fight, we get back to present-day Jackie encountering an Indian Kalaripayattu martial arts guru. In a fast and furious duel, the action flashes between present-day Jackie using a traditional long sword against his opponent’s double sabres, and in the past, sabre and shield. It’s quite a treat to see a wire-free traditional weapons fight in a post-millennium Jackie Chan film.

Jackie is soon on the run with Bollywood star Mallika Sherawat. Even though she is occasionally doubled, Mallika acquits herself well in a high-kicking fight with the bad guys as they are pursued into a rat glue factory. This scene is as hilarious as it is inventive, with Jackie having to figure out how to negotiate a sticky conveyor belt whilst fending off his assailants. It is a real highlight of the film and a modern JC classic.

The film flashes back once more to a huge battle between the Emperor’s soldiers and a rebel army. It all looks appropriately epic, with hundreds of extras. There are some nice stunts such as a chariot roll and lots of sword fighting on horseback. Despite all the sweeping camera moves, these types of battle have been done with far greater success in dedicated historical dramas such as “The Warlords” or “Red Cliff”.

After all these years Jackie still comes up with new moves

The Glue Factory scene is as hilarious as it is inventive

The film opens with an old fashioned fight and chase

Cutting back to the present, Jackie helicopters in to a real waterfall and it is filmed to show it really is him. Behind the waterfall is a hidden tomb that defies the laws of physics and gravity. The inevitable action that ensues is a crazy, almost psychedelic sequence of antagonists and protagonists flying around on wires. There are further flashbacks to Jackie fighting in the ancient battle and it is quite nice to have these flashes of him wielding a spear in a more realistic manner.

There is a brief interlude in the tomb fight with Jackie handing over the action to the younger members of his stunt team, who have an impressive high-kicking bout between themselves. Jackie himself still manages to get in some traditional Pak Mei (White Eyebrow kung fu) moves that evolve into a sort of martial arts dance against villain Sun Zhou’s soft-style technique.

The outtakes over the end credits reveal some particularly painful mishaps, not especially for Jackie Chan, but his poor co-stars Kim Hee-sun and Tony Leung Ka-fai!

Jackie tries to make a point 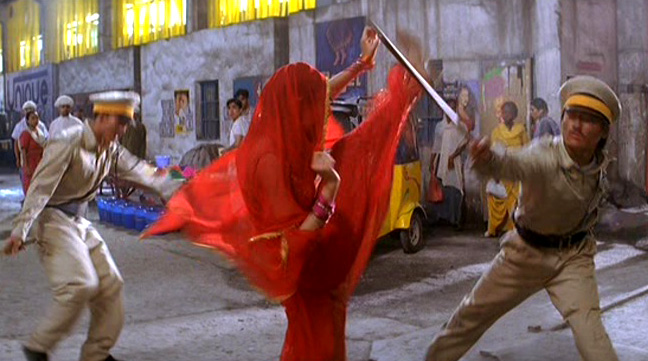 This fight incorporates some quite brilliant choreography

The Indian martial art featured is based on Kalaripayattu

There are some epic battles 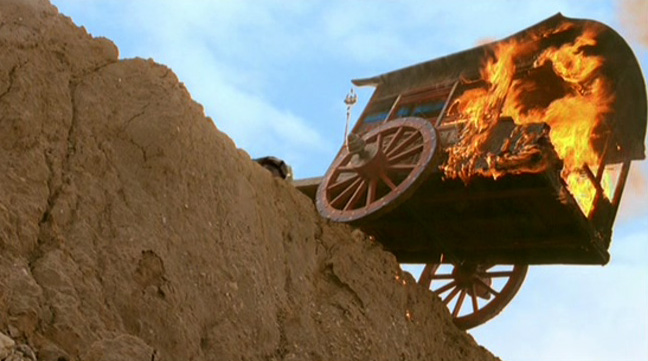 The teaming of director Stanley Tong and star Jackie Chan has been very successful with the pair breaking various Hong Kong box office records and entertaining fans with the movies “Police Story 3: Supercop”, “First Strike”, and “Rumble in the Bronx”. In fact, Jackie Chan’s first step to becoming a bona fide global superstar can be attributed to Rumble in the Bronx, after it went to number one at the US box office.

The Myth is an ambitious, big budget attempt at doing something different to the usual martial arts/cops/chase/action films that preceded it. Ultimately it fails to live up to its promise due to the incredibly under-whelming storytelling that constantly leaps between the past and present. In a post-The Matrix world, the physics-defying choreography and green screen effects in a couple of the scenes, especially the finale, really don’t enhance the action. As such, this film is easily the least successful collaboration between Tong and Chan.

Aside from the dramatic and special effects-driven shortcomings of this film, Stanley Tong rarely fails to make Jackie Chan’s style of action look great on screen, and it is here where he fares much better. “The Myth” is worth viewing purely for the initial action scenes. Tong really understands how to capture the stunts and choreography. In fact, the cinematography overall is beautiful often using bold and bright colours, especially in the sweeping battle scenes. The “Making of” features on the Cine Asia DVD and Blu-ray are testimony to the fact that the most impressive action was performed for real, such as the burning wagon hanging off of a cliff, or Jackie accidentally falling several metres onto a mattress. We get to see Jackie fight with proper swords and spears rather than using props as a weapon and he can still perform breathtaking stunts that are the envy of other action films. “The Myth” is worth watching for the hilariously inventive glue factory scene alone!

The end fight evolves into a martial arts dance

Where this film falls down in the story department, it makes up for in many of the action scenes and should be viewed as such.

Samantha tries not to come unstuck