“Dragon Squad” boasts an impressive cast list that includes a mix of some of Hong Kong’s top veteran stars as well as some of the current crop of young talent. Former Taiwanese boy band star Vanness Wu stars as “Officer Wang Sun-Ho”. As well as a solo singing career, Vanness has had a successful acting career in television and film, and has appeared in the movies “Kung Fu Fighter”, “Three Kingdoms: Resurrection of the Dragon”, “Kung Fu Chefs” and “Monk Comes Down the Mountain”.

Action legend Sammo Hung stars as retired police officer “Kong Long”. The year this film was released saw something of a rejuvenation of Sammo as a dramatic actor in this and to even greater acclaim in “SPL: Sha Po Lang/Kill Zone”, also released in 2005.

Sammo puts the kettle on

Heo Joon-ho plays “Captain Ko Tung-Yuen”. He is well known in South Korea for his character roles in television, film and musical theatre.

Maggie Q stars as the deadly assassin “Yuet”. Maggie is best known for her roles in the international box office hits “Mission: Impossible III” and “Die Hard 4.0/Live Free or Die Hard”, as well as playing the lead in the popular television series “Nikita”. Her career in movies began in Hong Kong when no less than Jackie Chan saw her potential to be an action star. Her acting career has gone from strength to strength with roles in films such as “Gen-Y Cops”, “Naked Weapon”, “Rush Hour 2” , “Three Kingdoms: Resurrection of the Dragon” and the “Divergent” series of films.

One of Asia’s most popular and acclaimed actors, Simon Yam stars as “Commander Hon Sun”. In a long and varied career, Yam has appeared in hit films such as Chow Yun Fat’s “Full Contact”, the first three instalments of the “Young and Dangerous” film series, “Naked Killer”, “SPL: Sha Po Lang”, “SPL 2: A Time for Consequences”, “Election 1 & 2”, “Ip Man 1 & 2” and “Bodyguards and Assassins”.

Kent Tong plays “Tiger Duen”. Tong was a popular TVB television actor during the 1980’s in Hong Kong, named as “Prince” among the “Five Tiger Generals” of the TVB channel. He has also had roles in the movies “Police Story”, “Eastern Condors” and “Chasing the Dragon”. Hugo Ng Doi-yung appears as “Panther Duen”. Ng is an actor and director who has had dramatic roles in over fifty films. There are also appearances from Isabella Leong, Mark Henderson, Philip Ng, Andy On, Abraham Boyd, Gordon Liu, Vincent Sze and Yuen Wah.

International police forces are at war with Panther Duen, a notorious drug lord responsible for the deaths of several officers. After a long and arduous manhunt, he is finally captured. A team of young Interpol agents escort Panther in his prison van through the city streets of Hong Kong to finally face justice in court. His big brother, Tiger Duen has other plans though, as a team of elite mercenaries ambush the prison convoy to liberate Panther. With several officers and agents killed in the ensuing gun battle, the surviving police officers vow to track the gang down.

However, all is not as it seems, with Panther not being the subject of a rescue, but of a kidnapping. The Interpol officers must join forces with a Hong Kong tactical police squad to restore their reputations and bring the gang to justice.

A team of elite mercenaries ambush the prison convoy 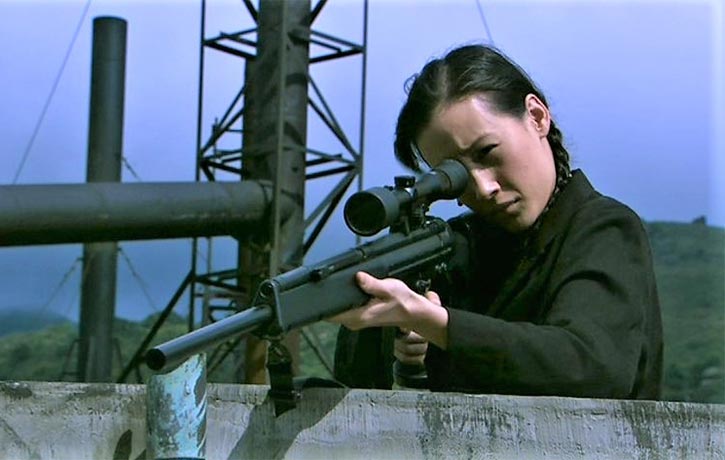 Each squad member is introduced with a brief look at their individual talents; kickboxing, car racing, sniper-shooting, undercover agent etc. The bad guys are introduced in a similar fashion highlighting their ex-special forces and military training. It leads us into a violent and bloody hijack of the police prison escort, resulting in the deaths of many police officers and the apparent liberation of Panther Duen.

Sammo Hung makes his first major impact on the action in a hard and heavy kettle (you read that right) versus machete fight with Kent Tong. Although Sammo is obviously doubled in places, he still performs much of the action himself and is as swift and skilled as ever.

During a scene where Tiger’s gang is confronted in a warehouse, there is gunfire, athletic chases on foot, and a decent fight from Lawrence Chou and Shawn Yue. There are plenty of high roundhouse and swift spinning kicks, atmospherically lit by Chinese lanterns. There is also a cool nod to Sammo’s Eastern Condors when Philip Ng fires off the spokes of an umbrella into a group of gangland thugs, much like Sammo’s trick with a bamboo leaf!

As the worlds of the rival factions and police collide, there is a major action set piece in a derelict factory. Not much hand-to-hand fighting going on, but there is lots of SWAT-like tactical weapons, fire and explosive stuntwork.

As the film starts to crescendo towards it’s conclusion, there is an inventive John Woo-esque shootout in a cemetery between Maggie Q and Xia Yu. Their usually long-distance sniping skills are tested in a unique way as they duel with their rifles close up among the tombstones.

The highlight of the fighting action is Sammo’s end battle with Heo Joon-ho. He twirls and strikes with his machete at astonishing speed. He also gets to demonstrate his trademark inventiveness by employing a plank of wood as a weapon, spinning it in every way, Peking Opera-style! There is some bizarre waving of hands in front of the camera however, which I can only assume is meant to represent his opponent’s point-of-view.

The final showdown between Michael Biehn and Vanness Wu appears to have taken a cue from the John Woo films of old, with guns blazing in a blizzard of feathers that eventually float in slow motion to the ground like snowflakes.

This thug has some bad gas 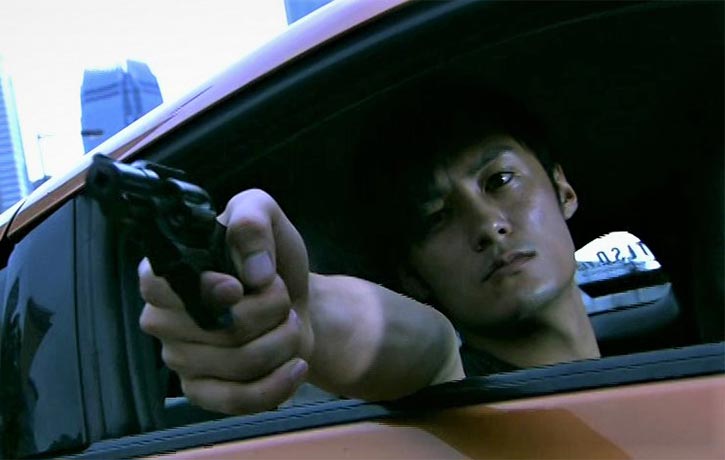 Each character is introduced with their specialist skill set 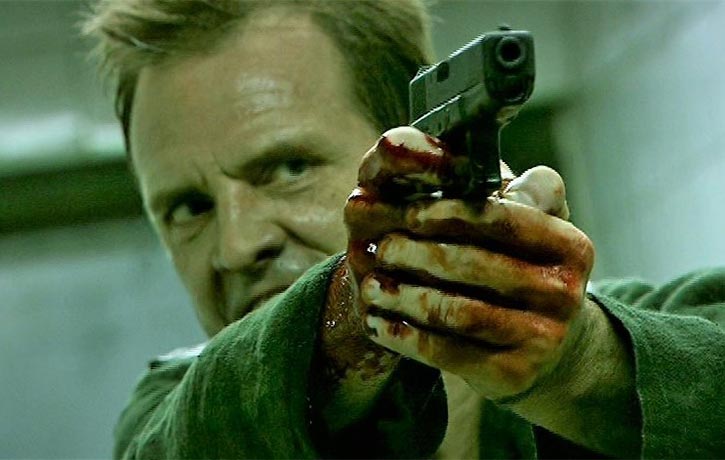 Petros has blood on his hands

At the start of the new millennium, in the pursuit of box office success, many Hong Kong filmmakers followed a formula of casting emerging young talents, usually popular singers, alongside existing stars. Films such as “Twins Effect”, “Gen-X Cops” and even Jackie Chan‘s “New Police Story”, saw good sales numbers using this method, even when there was mixed critical success.

“Dragon Squad” attempts the same thing but tries to multiply it by ten. It’s packed with popular stars, includes a Hollywood actor in the form of Michael Biehn of “Terminator” and “Aliens” fame, takes a familiar formulaic plot of gangsters and cops, and packs it with lots of shoot-outs, explosions, stunts and a couple of fights. Sadly, it all looks like it was filmed by a someone straight out of film school who wants to direct music videos and commercials.

Don’t misunderstand me, there is some good action present, but it is continually undermined by shaky camerawork, unnecessary quick zooms in and out, and cheap-looking, strobing slow motion. It’s a shame because occasionally the heavily-clichéd drama is actually quite well shot and acted. If the shooting method had been the other way round, this could probably have been a far better action film.

As you might expect, veteran stars Sammo Hung and Simon Yam give exemplary performances despite the shortcomings of the script. Michael Biehn has some good moments too, but looks either a little lost or a little bored during some of the slower dramatic moments. It is possibly Maggie Q, probably helped by having minimal dialogue, that comes out best, as a deadly, steely-eyed assassin. Her shoot-out in the cemetery is a highlight of the film.

If you like no-brainer, Hong Kong cops-and-gangsters shoot ’em ups, with the bonus of a couple of Sammo Hung fight scenes, then there is some entertainment here. Otherwise films such as “SPL: Sha Po Lang/Kill Zone”, “Invisible Target” and “Flash Point” might serve you better.

Retired police officer Kong Long has a troubled past

What were your impressions of this one, did you see it? Let us know in the comments below, join in the conversation on Facebook and follow us on Twitter.  (For more outside the box, dragon-like moves check out our other movie reviews!)