The art of Wing Chun has seen a surge in popularity in the 21st century, largely as a result of the “Ip Man” films depicting the life of the famed Grandmaster of Wing Chun and mentor to the legendary Bruce Lee. However, this was hardly the first time Wing Chun had been depicted in Hong Kong martial arts films -one of the most classic early examples is “Warriors Two”, in which Casanova Wong plays Chan Wah-shun, well-known as the man who would become the mentor of Ip Man himself!

In the lead role of Chan Wah-shun is the Korean kicking machine Casanova Wong, aka the Human Tornado. The film marks one of Wong’s early outings as a leading man, as well as another of his numerous collaborations with Sammo Hung, who, in addition to directing the film, appears in the comic relief role of Fei Chun. Another well-known historical master of Wing Chun makes an appearance in the film in the form of Leung Jan, played by Leung Ka-yan, aka Beardy, while the villainous duties of the film are handled by Fung Hark-on in the role of the treacherous Master Mo, who hatches a scheme to assassinate the local mayor, leading our heroes to test the power of their Wing Chun skills in an effort to stop him.

After the skilled kung fu practitioner Chan Wah-shun uncovers a plot by Master Mo to assassinate the local mayor and usurp his authority, he narrowly survives an attempt on his life by Master Mo’s henchman to keep their plot a secret. While in hiding, Chan is discovered by Fei Chun, the eager student of the local Wing Chun master Leung Jan, who manages to persuade his teacher to take on Chan as a disciple.

Chan proves a dedicated student and quick learner as Master Leung puts him through the rigorous Wing Chun training regimen. However, Master Mo eventually manages to track his enemy down and kills Master Leung in an attack on his school. Chan, Fei Chun, and Master Leung’s niece manage to escape, and form a pact to bring down Master Mo and avenge their mentor.

Warming up with some flashy kicks

This is a creepy scene!

The snake stalking its prey

The Human Tornado is ready for action…

Wing Chun most definitely gets the respect it deserves in “Warriors Two”. Martial arts films of the 70’s and 80’s were as much about training as they were about combat, and “Warriors Two” establishes its superb balance of both in its opening sequence. Chan vigorously perfects his skills beside a waterfall before leaping into a sparring match against Master Leung in a bamboo forest. As is common for martial arts film of the era, the entire opening sequence has no real bearing on the film itself, and that’s actually one of its most endearing qualities. It’s essentially the inverse of the outtakes found at the end of most Jackie Chan movies. Coming at the beginning rather than the end of the film, the viewer gets a warm-up of what’s to come, and even the setting in a bamboo forest, departing from the black or red curtain often seen in such opening sequences, is a nice change.

The opening of the film is perfectly illustrative of the Wing Chun training sequences that make up the film’s middle section, and these are certainly some of the best pre-“Ip Man” Wing Chun training sequences you’re ever going to find. Sammo does take a little creative license here or there, especially with the authenticity of one training scene involving a few mobilized wooden dummies (mook jong) in a training hall. But for the most part, the training sequences will be instantly recognizable to any Wing Chun student, and Sammo films and stages them in such a way that viewers unfamiliar with the art can see and understand its methodology, whether the training is calling for blindfolded sparring, sticky hands (chi sao), or anything in between!

Of course, you don’t put Casanova Wong in a movie without letting him show off his incredible Taekwondo kicks. Wong was one of the few men in Hong Kong films who could match Hwang Jang-lee as a true kicking machine, something he proves beyond a shadow of a doubt here. He first earned the nickname of “The Human Tornado” during his time in the South Korean army, where he would regularly leave onlookers speechless with his proclivity for spinning kicks. The sheer volume of spinning kicks he executes throughout the film are unbelievable not only for how skilled he is, but for the fact that he can perform so many in such rapid succession and somehow not get dizzy. That Sammo is just able to keep up with him at all is an astonishing accomplishment on his part. The two men had previously collaborated in “Iron Fisted Monk”, which Sammo also directed, and they make a great duo here in “Warriors Two”.

The deceptive power of the Praying Mantis unleashed!

Taking his disciple through the science of pressure points

Student learning from the master 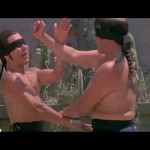 Sparring blindfolded hones all the senses

Given Chan’s initial inexperience with Wing Chun, Fei Chun is as much his training partner as his sidekick, affording him the opportunity to be much more than the (admittedly quite amusing) comic relief he starts out as. The film also makes a solid transition from its focus on training to combat in its third act. The last half hour of the film is almost nothing but non-stop action, culminating in Wong and Sammo’s double-team battle against a gravity defying exponent of Praying Mantis and a near-invincible master of Iron Shirt kung fu. Fei Chun’s comic relief antics do lead to one bizarre maneuver that can only be described as juggling his opponent, but within the context of the incredible duel that is the film’s finale, you’ll probably just cheer that much harder once it arrives!

By any objective standard, “Warriors Two” is a winner. The blend of classical Wing Chun with Wong’s breathtaking Taekwondo kicks is stunning and worthy of repeated viewings. He and Sammo truly bring out the best in each other, and the last third of the film should arguably be required viewing for filmmakers in how to craft prolonged action sequences that neither lose their energy or become tedious. For fans of old school kung fu, “Warriors Two” is one of the finest films in its class.

Fighting from a split!