Jackie Chan is a man of many, many talents, and one of them happens to be throwing his legions of fans a curveball at unpredictable intervals. Nothing more perfectly describes the dour, 100 percent comedy-free “Police Story: Lockdown”, easily Jackie’s grimmest and darkest film since “Crime Story”.

Jackie Chan steps into the lead of Detective Zhong Wen, and if you’re expecting a barrage of puns and one-liners on how similar that name is to “John Wayne”, you’re in for a very different kind of Jackie Chan movie. This is one where the Clown Prince of Kung Fu wears the shoes of a battle-weary, mentally exhausted veteran cop that can really tell some stories. Jing Tian plays his daughter, Miao, who becomes entangled in the unfocused vendetta of her boyfriend, nightclub owner Wu Jiang, played by Liu Ye. Zhong Xiaoou assumes the role of Wei Xiaofu, the primary subject of Wu’s rage, while the “Iron Monkey” himself, Yu Rong Guang, appears as Zhong’s police Captain.

Chinese Detective Zhong Wen attempts to reconnect with his estranged daughter, Miao, but his attempt at making amends isn’t helped by the fact that the two meet in the nightclub owned by Miao’s boyfriend, Wu, whose relationship is viewed with disapproval by Zhong. Unfortunately, the chasm between Zhong and Miao must be set aside when Wu suddenly takes the entire nightclub hostage, with his only demand being a meeting with a prisoner named Wei Xiaofu. As Zhong soon discovers, Wu isn’t simply a terrorist out to make a statement, but a man with, (in his own mind at least) a righteous score to settle with individuals who have wronged him.

It must be said upfront that “Police Story: Lockdown” is about the closest Jackie has ever come to appearing in a soap-opera, which is by no means a criticism of the film. Aside from 2004’s “New Police Story”, the difference between “Lockdown” and the previous “Police Story” films is the difference between “Ace Ventura: Pet Detective” and any one of the “Saw” movies. Jackie’s still the in-over-his-head underdog that he’s always been, but not the in that lovable, goofy kind of way.

Here, he’s both a cop and a father who simply looks drained and beaten down by the never-ending rigors of dedication to his job and his strained relationship with his daughter. When an argument erupts between them, Jackie may not be in danger of getting creamed with his own birthday cake, but he probably wishes that he were when bitter family emotions (between him and daughter) bubble to the surface as they tend to do when estranged loved ones reconnect.

Zhong Wen knows he must rally himself 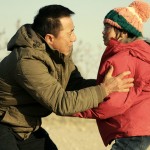 Zhong rescues a child from harm

Zhong must step into the cage

What’s even more surprising than the dearth of laughter is that “Lockdown” really isn’t that heavy on action either, but not in such a way that Jackie’s fans will feel short-changed. As if gloating to the viewer about how very different of a Jackie Chan movie they’re in for, the film’s opening shot shows him with a gun to his temple, his hair shaved down to a Mainland policeman’s crew cut.

He’s been quite vocal in the past about wanting to be taken as seriously for his acting as his stunt work, and he turns in a genuinely strong performance of a man worn down as both a cop and a father but who won’t hesitate to rally himself when both call for it simultaneously.

When the martial arts action does kick in, Jackie pulls another wild card on his fans with a very different approach to combat than he typically draws upon. In the past, Jackie’s greatest asset apart from punching and kicking, is his ability to improvise with whatever random objects surround him that he can turn into weapons. In “Lockdown”, Jackie extends his portrayal of a Mainland law enforcement official by primarily drawing upon grappling and restraining techniques from Chin-Na and Shuai Jiao.

The main set piece pits him against one of Wu’s henchmen in a cage for the release of the hostages, and Jackie hasn’t looked this much ‘on the ropes’ since his initial match-up with Brad Allen in “Gorgeous”. MMA fans are sure to pump their fists in the air at the sight of Jackie applying a somewhat modified rear-naked choke on his adversary, the same goes for the flashback montage showing Wu’s competitive history in underground Muay Thai matches.

The finale is mainly focused on streamlining the conflicting details of Wu’s vendetta, but it still manages to put Jackie in a predicament to save his daughter, and oddly enough, his enemy, which makes his reliance on restraining maneuvers that much more appropriate.

Wu used to be a fierce Muay Thai champion

Nobody move a muscle

Negotiating for freedom of the hostages

“Police Story: Lockdown” isn’t your average Jackie Chan movie, to say the least. It’s a dark, emotional hostage drama with not a single joke in sight, the action scenes are often secondary, and Jackie adopts an entirely different fighting style when those do arrive. It’s also never boring, Jackie handles his new approach to combat like a pro, and he gives a strong dramatic performance to top it all off. If you want to see Jackie try something new, “Police Story: Lockdown” is further evidence that innovation is one of the things he does best.