A fictionalised account of the tough life in Master Yu Jim Yuen’s Chinese Opera School that produced the likes of Hong Kong superstars Jackie Chan, Sammo Hung and Yuen Biao. Directed by Alex Law the movie stars Sammo Hung as the real-life master who trained him.

Needing no introduction, action superstar Sammo Hung stars as “Master Yu”. The skills Sammo learned at the opera school as a child helped him to redefine martial arts movie action with his innovation for five decades. His vast filmography ranges from “Enter the Dragon”, through to “The Prodigal Son”, “Eastern Condors”, “Encounters of the Spooky Kind”, “Wheels on Meals”, and many, many more classics.

Martial arts actor, stuntman and opera student of Madame Fan Fok-Fa, Lam Ching-ying plays “Uncle Wah”, a former opera brother of Master Yu working as a movie stuntman. Famous for his role as “Master Kau” in “Mr Vampire”, he will be familiar to fans as the fan-wielding assassin in “Magnificent Butcher”, and as Wing Chun master “Leung Yee-tai” in “Prodigal Son”.

Probably best known for playing “Golden Swallow” in the movie “Come Drink With Me”, Cheng Pei-pei stars as “Madam Ching”, who teaches the art of Chinese Opera to her own troupe of female students. As well as her star-making role in “Come Drink With Me”, Pei-pei also starred to great acclaim in martial arts movies such as “Flirting Scholar”, “Flying Dagger”, “Brothers Five” and the Oscar-winning international box office hit, “Crouching Tiger, Hidden Dragon”.

In 1960’s Hong Kong, traditional Chinese Opera is in decline, with audiences preferring to go to the movies or watch television. Refusing to let his art die, Master Yu runs one of the last of the elite opera schools. A young student, Cheng Lung, signs up to the school for ten years, excited to learn all the acrobatics he has seen the other students practising. However, he soon learns that the strict Master Yu runs a tough regime with the students being put through hours of hard training, painful stretching, and getting brutally caned if they failed to hold their handstands for two hours. Accepting the nickname “Big Nose”, Cheng builds a camaraderie with his fellow students Sammo and Biao, as they live, suffer, train and perform together.

Although the years of harsh training eventually turn them into some of the best performers in Hong Kong, they cannot halt the decline of the opera audiences. With the Hong Kong martial arts movie industry blossoming, they have no alternative but to leave their master and the opera behind in search of new opportunities. Master Yu must deal with his own dilemmas as his opera school faces closure.

The film opens with the enthusiastic Big Nose, a caricature of the young Jackie Chan, arriving at the school to sign up for ten years. The mouldy plaster walls are falling apart but it is home to a couple of dozen children practicing the singing, dancing, acrobatics and martial arts of traditional Chinese opera.

The training is tough, vividly illustrated by Sammo Hung bending a child backwards over his knee to make their back more flexible, or forcing another small child’s foot to his forehead as he stretches his leg. Handstands must be held for two hours or the student will face a painful punishment. Sammo as Master Yu whips canes over and under the young incarnation of himself as he rapidly backflips across the classroom. Any mistakes or misbehaviour are rewarded with a vicious caning of the backside from the uber-strict master.

The trouser incident is based on a real event

Uncle Wah is a movie stuntman

Work hard, play hard seems to be the ethic of the students, and when they can, they often take any opportunity to get up to mischief. There is an amusing scene set on a double-decker bus as the little rascal opera students all climb out of the windows of the top deck and somersault to the ground. Based on a real incident, it must have been the inspiration for Jackie Chan’s antics in Police Story years later!

The pay off of this hard training is realised in the beautifully captured stage performances. The physical abilities and acrobatics of these young performers are at another level. Every nuance and action of the opera is delivered with absolute precision. When it is not, Master Yu is furious. Another scene based on a real-life incident sees Big Nose accidentally hooking his trousers onto his sword as he enters the stage to perform. The audience laugh hysterically, whilst Master Yu is a picture of silent rage.

As the students enter their teenage years and the live opera shows peter out, they begin working as extras in movies to make some cash and get fed. It is a bittersweet time as they demonstrate their superior skills and discipline within the film industry, whilst they can no longer afford to pay the theatre to perform operas.

Inevitably for sixties teenagers, the opera troupe discover pop music and girls! At the local dancehall they even perform their opera skills to “Apache” by British pop band The Shadows!

Master Yu, who has focused his whole life on the opera, attracts the affection of fellow opera teacher, Madam Ching. Having spent most of his time either training, teaching or playing Mahjong with his male friends, Master Yu has some touching and amusing scenes as he awkwardly tries to court Madam Ching. Probably the funniest scene is when he tries to explain why he got her a cake that has “Happy 70th Birthday” iced on it!

The closest the film comes to portraying what we traditionally consider “action” in a Chinese film is a rather sad scene depicting the fate of Uncle Wah. When a stunt goes wrong on a film set, a blow to the head renders Uncle Wah confused. Thinking he really is a Peking Opera character he fights off the young Sammo and Big Nose, who of course flip majestically Hong Kong stunt-style off the roof of a movie set. Climbing up into the rafters, Master Yu engages Wah in the opera in the hope that he will calm down if he can get to the end of his imagined performance. It’s a surprisingly tense scene and yet also a fascinating glimpse of Sammo Hung and Lam Ching Ying performing the traditional skills they learned as youngsters. 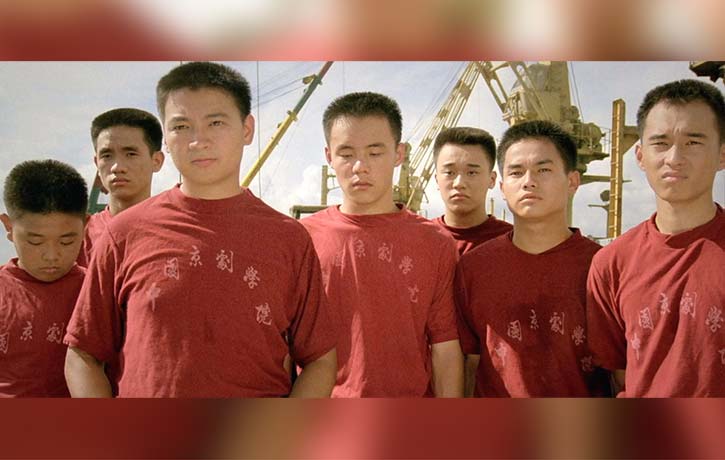 The boys try their opera acrobatics at the local dancehall

The opera is colourfully brought to life in this restored version

I had only previously seen this movie on a grainy old transfer to VCD. It was a genuine treat to watch this high definition presentation on Netflix. Sourced from the recent Fortune Star Blu-ray remaster, the picture is clean and bright with excellent, clear subtitles.

Sixties Hong Kong fashions and locations are faithfully recreated to give a sense of the period. Sammo plays the stern but socially-awkward master well, barely performing a single action scene. It must have been strange for Sammo recreating moments such as Master Yu giving the young Sammo a sound thrashing. My only criticism of Sammo’s performance, bizarrely, is that, for the most part, he seems too “nice”.

The actors portraying the young versions of Jackie Chan, Sammo Hung and Yuen Biao play their parts well, albeit as rough approximations of their real counterparts. Physically they are appropriately acrobatic and it is a shame that this movie seems to be the only one on their respective CV’s. In a mostly dramatic role, Cheng Pei-pei is delightful and charming as Madam Ching, and does give us brief glimpses of her graceful dancing skills. Lam Ching Ying probably has the meatiest role as Uncle Wah, although playing a movie stuntman who likes to smoke and drink was probably not much of a stretch for him!

“Painted Faces” is not a martial arts film. Part coming-of-age drama, part biographical account, it’s a beautifully painted portrait of a sadly dying art that gave us some of the best martial arts movie action stars to ever grace the screen. If you want to enrich your knowledge on what the likes of Sammo Hung, Jackie Chan and Yuen Biao et al went through to obtain their incredible skills, this is a must-see, albeit featherweight, biopic.

Painted Faces was restored in HD in 2018

Students were expected to hold a handstand for 2 hours

A stunt too far for Uncle Wah

Jackie Chan said this bus was moving in real life

Have you seen “Painted Faces”? Which classic martial arts movies have you enjoyed on Netflix recently and which ones would you like to see our team review? Let us know in the comments below, join in the conversation, share this on Facebook, and follow us on Twitter & Instagram. You can also click for more FUflix by subscribing to our YouTube channel where you’ll find new and classic movie trailers, exclusive clips and interviews with all the biggest martial arts stars!