A pet project of Jackie Chan‘s that he had wanted to make for over twenty years. Taking place in 227 BCE during the Warring States Period, a peasant soldier hopes to escape to a better life as reward for turning over an enemy General. Starring Jackie Chan and directed by Ding Sheng.

Action legend Jackie Chan stars as “The Soldier”, a simple man who was conscripted into the army, who believes wars solve nothing for the common people.

Chinese-American singer Leehom Wang co-stars as “The General”. He believes that war ultimately leads to unification and peace and is fiercely proud of his military standing. Wang has appeared in the movies “China Strike Force”, “The Avenging Fist”, and notably in Ang Lee’s “Lust, Caution”. Having completed “Little Big Soldier”, Wang stepped behind the camera to direct and star in, “Love in Disguise”, also starring Liu Yifei and Joan Chen. On release it became the highest grossing film in Chinese cinematic history for a first-time director, hauling in over 60,000,000 RMB. He made his Hollywood debut in 2015 in Michael Mann’s cyber-thriller “Blackhat”.

Steve Yoo plays the General’s wicked younger brother “Prince Wen”. A former Korean-American pop star and one of the biggest selling artists in Korean history, selling over 5 million records in the country, his career in South Korea ended in 2002. Having been drafted into the army for mandatory military service, he became a naturalised American citizen. The South Korean government considered this an act of desertion and deported him, permanently banning him from entering the country. Ironically, he made his acting debut in “Little Big Soldier”. He has gone on to appear in the films “Chinese Zodiac“, “Man of Tai Chi“, “The Wrath of Vajra” and “Dragon Blade“.

Martial art movie veterans Yu Rong Guang of “Iron Monkey” fame, features as “Deputy General Yu”, and Jackie’s frequent co-star Ken Lo plays “Guard Yong”. Bringing some glamour to the proceedings is Chinese actress Lin Peng as the seductive “Singer”, and Xu Dongmei as “Lou Fan Yan”, a wild tribeswoman who is the equal of any of the men in combat.

Yu Rong Guang has a cameo

The Soldier is extremely accurate at throwing stones

In the aftermath of a ferocious battle between the two rival kingdoms of the Liang and the Wei, just two men survive. One is a simple foot Soldier from the Liang, who uses a fake arrow to play dead, and the other an enemy General from the Royal House of Wei. The Soldier hopes to hand over the General to his people in exchange for a handsome reward and a permanent escape from the battlefield. The injured General realises he needs the Soldier to survive, but hopes for the opportunity to escape as they make their journey across the Chinese countryside. In hot pursuit of the pair is the General’s murderous brother Prince Wen, who aims to be sole heir to the kingdom.

Along the way they must defend themselves from bandits, marauding tribesmen, Prince Wen’s soldiers and even a bear! As they spend more time depending on each other for their futures, the pair develop a begrudging mutual respect for each other.

In the aftermath of a battle that has left thousands of soldiers dead, the young Wei General fights off one surviving soldier to maintain his kingdom’s banner on the battlefield. Jackie Chan plays dead but watches on as the pair swing their swords at each other, barely able to stand, until the soldier is impaled on the banner in the throes of the duel. Jackie gags and ties up the injured and barely conscious General and finds a horse-drawn cart to transport him on. It is not long before they are ambushed by Yu Rong Guang and his men. It is here that we discover that Jackie’s Soldier is actually rather unskilled at fighting, preferring to duck and dodge and trick his way out of a fight.

In a dream sequence, we see some vintage Jackie Chan action as the Soldier and the General fight it out in a barn. Although there is a little bit of wire assistance going on, Jackie can still move like a monkey that’s been possessed by Gene Kelly! When the Soldier and the General are attacked in the woods, there is a return to the familiar comedy of Jackie Chan‘s older films, as he rolls and flips around everything and everyone that surrounds him.

Even the bears are after them 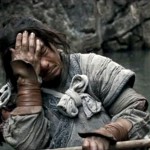 There is plenty of humour in amongst the action

Having been confronted by a bear, the General uses the distraction to try to attack the Soldier. Even though they are both lying on the ground, there are still a few slick strikes and blocks thrown in, with Jackie finding a painful but comic way to stop his foe from fighting.

The skilled fighting General and the hapless Soldier decide to duel with sticks to settle how formidable the young warrior is. It is a neat comic twist to see Jackie as the one lacking the fighting skills, but through his rather cowardly style, he can still get the upper hand over his opponent. The stakes are upped when Yu Rong Guang and his men catch up with the pair in the woods. Jackie scales a tree using a sash, much as he did in “Who Am I?”, before displaying his terrible skills with a spear.

Appearing like Native Americans in a Western, a nomadic tribe armed with axes, whips and bolas attack the General and the Soldier. There are some impressive stunts on horseback and some great slow-motion filming capturing Jackie’s skill and timing as he snatches the bolas out of the air. The General and the Soldier are taken prisoner by the nomads, along with many others. Prince Wen and his soldiers stumble across the nomad camp resulting in an all-out fight. The stunt team earn their stripes with hand-to-hand and weapon-to-weapon combat, some on horseback, and some on the ground, but all of it looking like every impact was made with full force. Xu Dongmei is especially good, cracking and twirling her whip to great effect. As usual, Jackie comes up with an innovative way to escape their bindings, and their surroundings!

After a brief quarrel with each involving a rope, the General and the Soldier are finally confronted by Prince Wen and his man-at-arms. They are interrupted by the now irate nomads leading to a three-way battle. The serious fight choreography is left to the Prince and the General, whilst the Soldier leaps from rock to tree branch like a chimpanzee, before discovering he can use his skill at throwing stones with extreme accuracy to fight most effectively.

The film takes place during the Warring States Period

Taken prisoner by the nomads

The traditional outtakes in the end credits reveal not only some of the funny mishaps, but also the real chemistry that Jackie Chan and Leehom Wang obviously shared throughout filming.

In recent years Jackie Chan has often stated that he would like to be remembered for his acting as much as his action. Aged 55 when he made “Little Big Soldier”, it is obvious that we are not going to get the acrobatics of “Drunken Master“, or the incredibly dangerous stunts of “Police Story“. But what we do get in spades is Jackie bringing something else that is often over-looked because of the spectacular physicality in his earlier action films; charm and wit.

For films like “Shinjuku Incident” or “The Founding of a Republic”, Jackie very obviously, in fact TOO obviously, moved away from being the action hero, and played it very straight and serious. For “Little Big Soldier” he has got the balance just about perfect. This not an out-and-out comedy film, or even an out-and-out action film. It is a charming road movie with two engaging and well-acted leads, learning to respect each other, whilst raising the question “War. What is it good for?”. Other Jackie Chan films often try to preach about living together in harmony or protecting the environment, but it is usually drummed home with the delicacy of a sledge hammer. Here the message is subtly portrayed by an everyman-character that anyone can relate to.

Director Ding Sheng shoots the film beautifully using the mountains, rivers, fields and forests of the Chinese countryside as a backdrop rather than elaborate sets. The story is evenly paced, humorous and told with an honest sentimentality, punctuated throughout with short bursts of entertaining action rather than any standout elaborate set-pieces. The supporting cast, especially Leehom Wang, Lin Peng and Xu Dongmei, are all excellent in their roles.

Jackie Chan gives arguably a career-best acting performance as a character that is initially a coward, a scavenger and a trickster. He plays it with such charm, charisma and humanity though that the audience can’t help but be drawn in and ultimately find him likeable.

Jackie comes up with an innovative way to escape their bindings

Jackie scales a tree just like Who Am I

Steve Yoo has a near miss as Prince Wen

Hardcore action fans will probably be left unsatisfied. However, a good gauge for me is that when my wife (who is not a Chinese movie fan) watched this film, she laughed at the comic moments and cried at the end. Any film or performance that can draw emotion like that from its audience must be doing something right.