Probably Hong Kong’s hardest working actor, Andy Lau stars as “Fei”, a simple fisherman who possesses exceptional sword-fighting skills. Lau is a Cantopop singer-songwriter, actor, presenter and film producer and has acted in over 160 films, including “Twinkle Twinkle Lucky Stars”, “Infernal Affairs”, “Shaolin” and “As Tears Go By”. In 2005, Lau was awarded “Number One Hong Kong Box Office Actor 1985-2005”, his films having earned a total box office of HK$1,733,275,816 from 108 films in two decades, out-grossing even Jackie Chan, Jet Li and Stephen Chow.

Maggie Cheung stars as “Mo-sin”, an aide to the 13th Prince with an apparent ulterior motive. Best remembered for playing “May”, Jackie Chan’s long-suffering girlfriend in the “Police Story” movies, she has acquitted herself as both a respected dramatic and comedic actress, and as an action star, in films as diverse as “The Iceman Cometh”, “As Tears Go By”, “New Dragon Gate Inn”, “In the Mood for Love”, “The Heroic Trio” and “Hero“.

The late great Hong Kong singer and actress Anita Mui stars as “Princess Yuet-nga”, the Prince’s Bride-to-Be. As a singer Anita was known as the “Madonna of Asia”. As an actress, she has appeared in “Drunken Master II“, “Miracles”, “Rumble in the Bronx” and “The Heroic Trio”, to name but a few.

Singer Kenny Bee is adept with a sword

14th Prince is wicked and dangerous with the Pu Dao

Playing “13th Prince” is Kenny Bee, a popular Hong Kong singer, songwriter and actor. He is best known as a member of the pop group The Wynners and has appeared in the movies “Armour of God“, “Millionaires Express”, “Project A Part II” and “Miracles”.

Fei is a simple fisherman who comes to the rescue of the 13th Prince and his entourage when they are ambushed in a bamboo forest. Fei offers the royal dignitary refuge in his fishing village. Having fended off an attack by his usurper brother, 13th Prince sends Fei to protect and bring back his betrothed, Princess Yuet-nga, daughter of the Emperor. On the journey to meet 13th Prince, love blossoms between the fisherman and the Emperor’s daughter. Meanwhile 13th Prince’s beautiful advisor, Mo-sin seems to be in love with him, despite the fact that she has been sent to kill him by his evil brother…

Maggie Cheung has a great intro 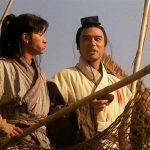 The opening action scene takes place in the classic wuxia backdrop of a bamboo forest. Assassins hidden underground burst out from the dirt floor in a whirlwind of bamboo, leaves and wirework. Andy Lau demonstrates great agility and flexibility with the straight sword as he dispatches the enemy in style.

Kelvin Wong-siu is introduced in gruesome but comical fashion, employing his skill with a bow and arrow to decapitate a traitor and using the head to set fire to a group of arrows that spell “Heaven and Earth”. We are left in no doubt that this is a wicked and dangerous bad guy.

Kenny Bee proves to be equally at home with a sword, with a swift performance of a Jianshu routine on a beach. It leads to an astonishing aquatic sequence featuring Andy Lau swimming with a real killer whale!

As our heroic warriors make their way through a misty wood, they engage dozens of 14th Prince’s soldiers. Armed with a straight sword, 13th Prince duels 14th Prince, who is wielding a Pu Dao, whilst Fei and Mo-sin fight off the soldiers. There is a great mix of traditional weapons skills and footwork, interspersed with acrobatic somersaults and wire stunts. Although she was doubled for a lot of the action, Maggie Cheung still gets her few frames in where she cuts and thrusts with a sword.

Legend Arthur Wong was the Cinematographer

14th Prince will stop at nothing to usurp his brother

A real full moon was shot for this silhouette

Anita Mui has a great introduction in a bloody battle with a horde of ninja-like assassins. It’s artistically filmed as they spring out from behind large, ornamental kites. The fight action here is much more grounded but the choreography maintains the same frenetic style.

After a brief respite by the river, as darkness falls, the ninjas strike again. There is some trampoline assisted acrobatics but again, a fast-paced sword fight ensues. The use of lighting and sparks from the campfires add to the drama of the attack.

As they continue their travels, Andy Lau duels an assassin in a misty thorny wood, giving the choreography a supernatural look and feel.

When the princess confronts Mo-sin, we are treated to a beautiful, albeit sped up, duel between Anita Mui and Maggie Cheung. Using many classical Jianshu techniques, the sword fighting uses water to great effect to give the choreography an extra dimension.

The 14th Prince’s soldiers attack Fei’s fishing village in brutal fashion with neither women nor children spared the blade. A furious Andy Lau moves with the force of a whirlwind, dispatching two or three foes at a time.

The Queens of HK action cinema

Our heroic warriors make their way through a misty wood

The kite attack was artistically filmed

Meanwhile in the underground palace, Maggie Cheung and Anita Mui fight with equal vigour, but are much more balletic. Kenny Bee and Kelvin Wong-siu fight sword versus Pu Dao amidst the waterfalls, before shortly being joined by Andy Lau. Again, it is all beautifully shot and choreographed, with great use of slow motion and water to highlight the graceful movement of the fighters and their weapons, before reaching a surprising conclusion.

Incredibly, effectively four directors worked on this film; Sammo Hung and Ching Siu Tung handled the action, the legendary Arthur Wong was responsible for the cinematography and producer Maybel Cheung dealt with the dramatic scenes.

The combination works surprisingly well. There are some great acting performances from the main leads and the film is never too slow in the wait between the exciting action sequences. It’s all beautifully shot and lit, with some great tracking camerawork capturing the fight choreography, backed up by an Ennio Morricone-style score from composer James Wong. 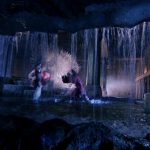 The water gives the choreography an extra dimension

Andy Lau moves with the force of a whirlwind

The action features a mix of traditional skills and acrobatics

Fair enough, the plot is very formulaic, the whole killer whale thing is bizarre and the wirework won’t be to every martial arts fan’s taste. But there is still plenty of action to enjoy, packed into a relatively short running time of 80 minutes. If you need a quick Crouching Tiger-style wuxia movie-fix, “Moon Warriors” is the perfect choice!