It’s not often you see a movie that’s equal parts Western and Shaw Brothers, but as they say, there’s a first time for everything. Injecting a heavy dose of wire-fu into a setting reminiscent of “The Magnificent Seven”, Benny Chan’s “Call of Heroes” is an entertaining sword-slinging adventure that benefits greatly from an ensemble cast, splendid production values and Sammo Hung’s always reliable action direction.

Sean Lau portrays our hero, the stalwart Yeung Hak-nan, who finds himself in the awkward position of defending the spontaneously violent ne’er-do-well Cho Siu-lun, played by Louis Koo. Wu Jing plays Cheung Yik, a militia leader for Cho’s father who has a bitter history with Yeung, while Eddie Peng steps into the role of wandering booze hound Ma Fung, who finds himself forced to rise to the occasion after stumbling into the film’s central conflict. Jiang Shuying also plays the minor but pivotal role of the kindhearted refugee Pak Ying, while Sammo’s son Sammy portrays the role of Cheung Po and the ever-puissant Shi Yan Neng also drops in to engage in a little kung fu mayhem as the mercenary Wong Wai-fu. 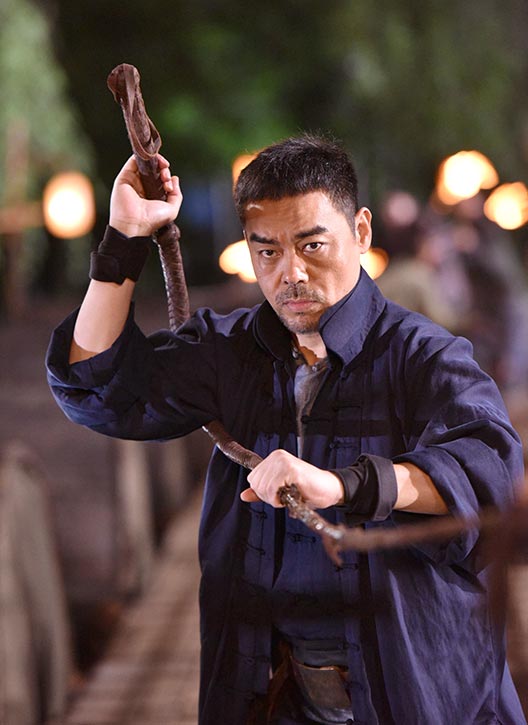 Yeung means business as he wields his whip!

At the height of the Qing Dynasty, China is the subject of ongoing battles between rival warlords. Seeking asylum for herself and the children she watches over, Pak Ying is granted refugee status in the city of Pucheng by its upstanding Sheriff Yeung Hak-nan, only to lose her life to the sadistic Cho, the son the local warlord Cao Ying, who delights in random acts of wanton violence. Cho is imprisoned and scheduled to be put to death by Yeung, but before the execution can get underway, Cao Ying’s lieutenant Cheung arrives to grant an ultimatum – release Cho, or Pucheng will be razed by Cao’s army. Although Yeung and the denizens of Pucheng are determined to stand their ground, the looming conflict is further complicated by the arrival of the wandering drunk Ma Fung, who has a history with Cheung that neither of them recalls with any fondness.

Ma Fung wakes up to what hes wandering about

Cheung once walked a different path

While the bulk of his filmography has been in a contemporary setting, both “Call of Heroes” and his 2011 hit “Shaolin” show that Benny Chan can pull off a period piece with the best of them. Every dime of the film’s $32 million budget (which, if you know anything about Chinese/Hong Kong movies, is gargantuan by Far East standards) is up on the screen, particularly in the form of Pucheng village. The setting is a nice throwback to the sort of sets Gordon Liu or The Venom Mob would be seen in at the height of the Shaw Brothers era, but done so well that one hopes that they simply left the place intact for people to come and occupy when they finished up. 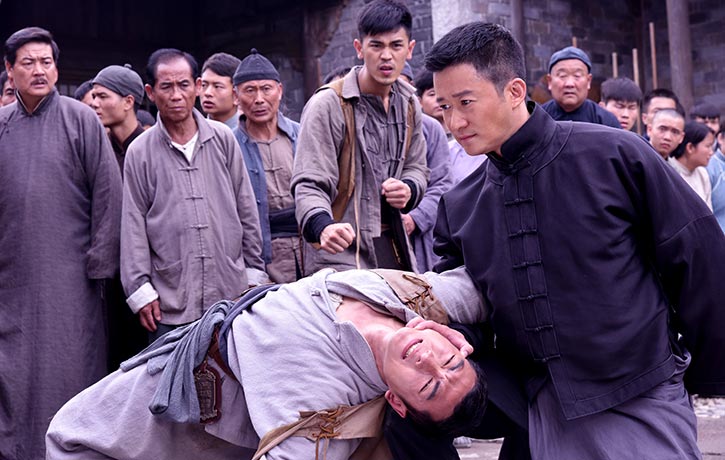 The Shaw Brothers comparison is actually a multi-tiered one, as “Call of Heroes” feels a lot like what, say, “Heroes of the East” or “The Eight Diagram Pole Fighter” would look like if they’d been made in the 21st century, but curiously enough, one that’s also married to elements of a Western. Nothing like the self-effacing “Shanghai Noon“, but more along the lines of the “last stand against heathen outsiders” seen in “The Magnificent Seven”, itself remade the very same year, no less. From the outset, one can see that “Call of Heroes” very much wants to homage the classics, but it’s surprising just how expansive it ends up being in doing so.

While not as fantastical or outlandish as his work on “Tai Chi Zero” (though, really, what could be?) Sammo’s wire-heavy action direction is suitably entertaining and engaging. The film kicks off with a tipsy Eddie Peng taking down a half dozen sword-wielding adversaries (does this technically count as him reprising his Wong Fei-hung role from 2014’s “Rise of the Legend“?). Something that jumps out very quickly is the rather surprising amount of grappling techniques from Chin-na that appear throughout the film, particularly after Wu Jing’s introduction, where he caps off his casual stroll attacking Pucheng villagers with an armlock worthy of a rewind.

Yeung is prepared to fall for his people

The grappling maneuvers of Chin-na are easily the aspect of Chinese martial arts that has been the most overlooked by action filmmakers and Sammo has seemingly been on a one-man quest to rectify this in the last few years, as seen in 2016’s “The Bodyguard”. However, the film is also driven by both fists and an assortment of Chinese weapons. One of the film’s major high points comes in a night fight where Cao’s men battle a group of Pucheng denizens led by Yeung in a flurry of swords, tonfas and bo staffs while trying to bust out Cho. While Yeung wages a cleaver here, he channels a certain well-known archaeologist elsewhere in the film with his primary weapon of choice, a whip, including in a bridge duel with a fierce though sadly underutilized Shi Yan Neng. 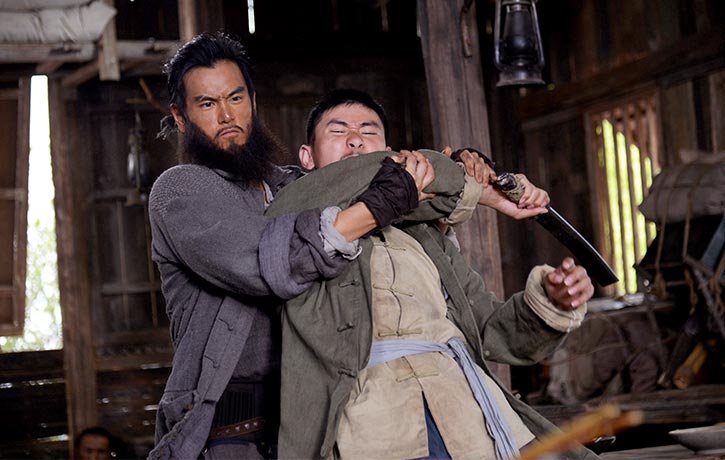 Wrapping up an attacker

The emotional epicenter is the grudge between Ma Fung and Cheung, which comes to a head in the final battle for the fate of Pucheng. As you’d expect when Sammo’s at the steering wheel, it’s a well-orchestrated swords vs spear duel amid the larger battle between Pucheng’s citizens and their invaders and anyone who’s ever wondered what devastation an avalanche of wine jugs formed into a huge pyramid could make and would look like, will walk away pretty satisfied.

“Call of Heroes” is an entertaining throwback to the Shaw Brothers era cross-pollinated with the Western template of “The Magnificent Seven”. While not as emotionally potent as “Shaolin”, Benny Chan gives it more levity and crafts a film that doesn’t take itself as seriously. And frankly, if Wu Jing’s 2014 leg surgery has slowed him down at all, you’d certainly never know it! 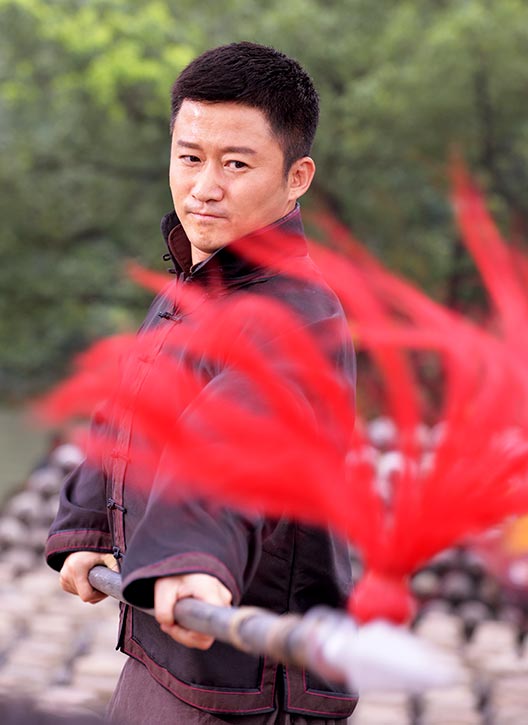 Cheung is a master of the spear 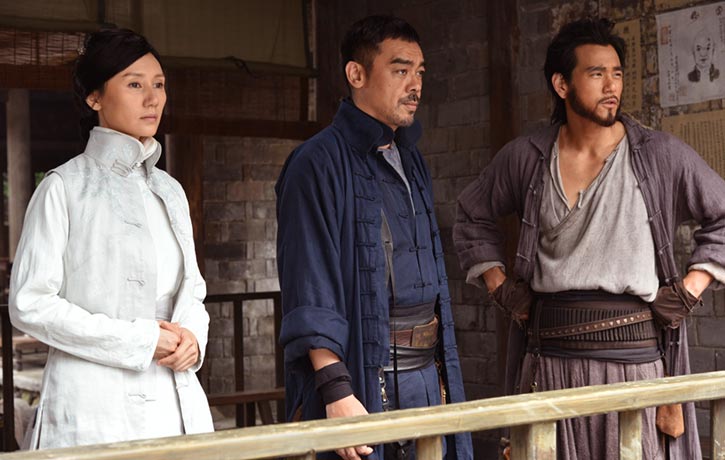 Yeung carries his man to safety