Arriving for the first time on Blu-ray in the UK from a magnificent 2K restoration, courtesy of Eureka Entertainment, is one of the most entertaining and exciting action comedies of all time. Starring the “Three Dragons” Jackie Chan, Sammo Hung (who also directs) and Yuen Biao, “Wheels on Meals” has repeatedly been hailed as the greatest collaboration of these three giants of Hong Kong action-cinema!

Action superstar Jackie Chan as “Thomas” stars alongside his Peking Opera brother Yuen Biao  as his cousin “David”. They are joined on their adventure by their equally legendary Chinese opera brother, Sammo Hung, as the bumbling private investigator “Moby”.

Beautiful Spanish actress and former “Miss Spain 1979”, Lola Forner brings some glamour to the proceedings as “Sylvia”. Forner would later co-star with Jackie Chan in the blockbusting action-adventure “Armour of God”.

To make Sammo’s hard-hitting choreography look as authentic and electrifying as possible, he brought in real-life full contact kickboxing champions Benny “The Jet” Urquidez and Keith Vitali. Aside from his astonishing unbeaten fighting career, Urquidez had previously appeared in the 1981 movie “Force Five”, which also starred Joe Lewis and Richard Norton. Following the success of his appearance in “Wheels on Meals”, he would later reunite with its three stars in 1988 for “Dragons Forever”. His fighting expertise has also been utilised on-and-off camera for Hollywood movies such as “Road House” and “Grosse Pointe Blank”. Having being ranked the “#1 Karate Fighter in America”, Keith Vitali appeared in the classic Canon Films production “Revenge of the Ninja”. He would go on to have various roles in the films “No Retreat, No Surrender 3: Blood Brothers”, “Bloodmoon” and “American Kickboxer”.

Thomas and David are cousins who run a fast food van in Barcelona, Spain. When they pay a visit to David’s father, who is in a psychiatric hospital, they bump into Sylvia, the daughter of David’s father’s girlfriend. Later that night, while serving food to their on-street customers, Thomas inadvertently bumps into Sylvia, who is pretending to be a prostitute. She is actually a thief who ends up hiding from her latest victim in the cousins’ fast food van.

Both Thomas and David are smitten by Sylvia, and allow her to stay in their apartment that night, but they wake to find Sylvia and their cash savings gone.  The following day, they bump into Moby, a bumbling private investigator who is also tracking Sylvia, as she is the unknowing heir to a sizeable inheritance that a criminal gang is trying to steal from her. When she is kidnapped, Thomas, David and Moby team up to save her, infiltrating the villains’ castle.

Legendary stuntman Blackie Ko was behind the vehicle stunts

Like a modern-day Three Musketeers, our heroes fighting skills will be tested to their absolute limits if they are to rescue Sylvia!

Having set the world of Hong Kong cinema alight with their individual big screen appearances, the successful teaming of Jackie Chan, Sammo Hung and Yuen Biao in the movies “Project A” and “Winners & Sinners”, proved to be a recipe for success. Their years of tough training together as children in traditional Chinese opera not only gave the “Three Dragons” an incredible skill set of acrobatics and martial arts, it also allowed them to develop the most exquisite timing when performing together. Arguably the action in “Wheels on Meals” represents the peak of their onscreen collaborations.

Although billed as a “Jackie Chan Film” in many releases, what works better here than say “Project A” or in the “Lucky Stars” films, is the even handling of the three leads. You never feel that one star is out-doing the other, although Sammo Hung does bare the brunt of the jokes!

The opening scenes give an almost perfect summary of what the audience can expect from the next 90 minutes; a classic visual joke, a training scene demonstrating Chan’s and Biao’s physical prowess and exceptional timing, some verbal humour with an adulterous neighbour, a simple yet jaw-dropping stunt fall from a first floor balcony, capped by a slightly saucy Benny Hill-style (ask your parents!) gag involving a pretty girl, a bucket of water and a policeman!

One for all and all for one!

On location for this movie, Benny Urquidez visited various Spanish dojos to test his skills against the local black belts

Each of these elements is built on sequence by sequence as the film progresses. Even something as simple as the two cousins preparing and delivering food for their customers is performed with humorous and flamboyant physical skill. When a group of bikers cause trouble there is an astonishing physical stunt captured in slow motion as the bikers are knocked off at full force by our two heroes. Sammo also makes his entrance to proceedings in a typically full contact manner.

The fights that follow are lightning fast, high-kicking and hard hitting setting the tone and building towards the movie’s finale. Keith Vitali and Benny Urquidez prove to be ideal foils for Sammo’s trademark full-on choreography throughout.

On the journey to the film’s conclusion there are some thoroughly entertaining sequences involving skateboards, chases through the picturesque stone streets of Barcelona, some incredible automotive stunts that wouldn’t look out of place in an early eighties Bond movie, and our heroes’ attempts to sneak into the villain’s castle, that are both hilarious and physically impressive in equal measure.

It is well-documented that many fans consider the final fight between Chan and Urquidez to be one of the finest ever committed to film, and rightly so. Even today, in a world that has seen the likes of Van Damme, Tony Jaa and Scott Adkins‘ Yuri Boyka, it is still absolutely electrifying to watch, and remains a standard for others to aspire to. Additionally, the interspersed individual action scenes featuring Sammo Hung and Yuen Biao should not be overlooked. The way Yuen Biao flips and somersaults around the furniture is especially impressive. Sammo Hung shines with his Chinese opera-style weapons skills, initially with a medieval pike and then a pair of swords. Keith Vitali also takes the hits as hard as he gives them in his role of a henchman trying to stop David and Moby.

Absolutely electrifying to watch, remains a standard for others to aspire to

Packed with crazy action and stunts! 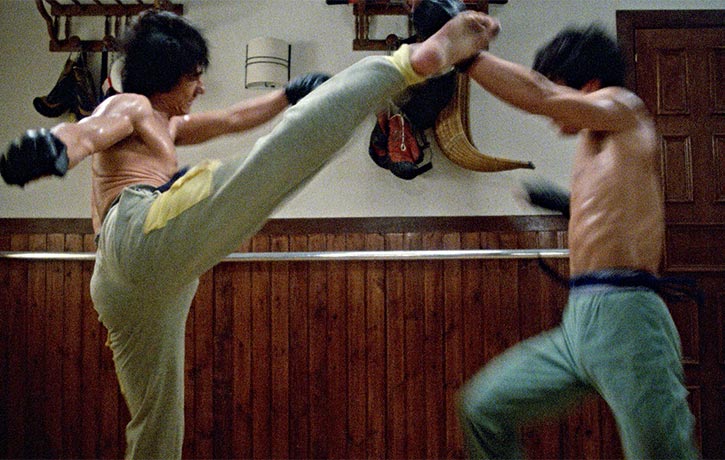 Although the Three Dragons collaborated several times over the years, it’s in “Wheels on Meals” that they hit their most evenly balanced strides in action and comedy, becoming a resounding success and firm fan favourite as a result.

As a youngster in the middle of the VHS rental boom of the 1980s, I had been blown away by the films of Bruce Lee. My uncle, who practiced karate and sparked my original interest in martial arts training, told me if you like Bruce Lee, you should check out the films of a certain “Jackie Chan”. Our local video rental store had a reasonable selection of martial arts films and the first two Jackie Chan films that I hired were “Police Story” and “Wheels on Meals”. It was the beginning of a lifelong interest in Hong Kong action films that continues to this day.  Whilst “Police Story” introduced me to a stunning new level of stunts and fight choreography, “Wheels on Meals” successfully carried those incredible skills through to the comedy genre. It also served as my introduction to stars Sammo Hung and Yuen Biao.

Wanting to give the film a different look and a more international appeal, Sammo Hung chose to film in Barcelona, making good use of the Spanish city’s many exotic locations. Sammo has a real visual flair in this film. The architectural beauty of Barcelona is captured at every opportunity, giving this a very unique style for a Hong Kong film. There is a beautiful expanding tracking shot establishing the market square location, and the famous buildings of the revered architect Antoni Gaudí are well represented.

Having fun amidst the colourful backdrop

The cousins run a fast-food van

Available in Limited Edition slipcase with booklet 4000 copies only

David and Moby are searching for the same girl

Some of the humour would be considered politically incorrect these days, but taken in the context of when this film was made, you’d have to be a pretty harsh critic to be offended by it. It’s no worse than a mild “Carry On” comedy film in places, and more often than not raises a chuckle, as do the slapstick elements.

In addition to the fantastic picture quality and original English and Cantonese mono and 5.1 soundtracks, the Eureka Blu-ray features a unique “hybrid audio option”. It combines the original Cantonese dialogue track mixed with the alternate, and much funkier, soundtrack from the original international release. The interviews and extra features with Sammo Hung, Yuen Biao, Benny Urquidez, Keith Vitali, and frequent Jackie Chan collaborator Stanley Tong, are the same as the ones from the Hong Kong Legends DVD. There is an additional archival interview in which Sammo Hung discusses the making of “Wheels and Meals”, his reasons for choosing Barcelona as a location, and his opinions on the future of the Hong Kong film industry. Also included are the very entertaining outtakes from the Japanese release of the film that were omitted from the original international release.

Although the three leads would work many times together over the years, “Wheels on Meals” stands as possibly their most perfect collaboration. The combined comedy, action and relationship of their three characters has been touched on in other projects, but never quite matched what they achieved here.

Eureka Entertainment have done it again and delivered the definitive version of a fan favourite and all-time classic. “Wheels on Meals” is another absolutely essential addition to your martial arts movie collection! 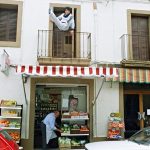 Moby bares the brunt of the jokes

Spectacular crashes and smashes in this chase

and you can also order it from Amazon, and Zavvi. Stay tuned for your chance to win your own copy! Enjoying these newly restored classics? Which other FU-flix do you reckon deserve the same royal treatment? Let us know in the comments below, Like, share and join in the conversation on Facebook and follow us on Twitter & Instagram. (In the meantime, check out these Top 10’s, exclusive interviews, and why not subscribe for videos too!)