Being a fan of Hong Kong action flicks living in the English-speaking world has a downside not found in most fandoms. Specifically, reading negative reviews online for a movie you’ve been heavily anticipating can make the wait to see it (which, in our case, is already a prolonged one to start with) that much more excruciating. “Special ID” is a specimen of this conundrum. Is it possible that, for the first time in human history, we now live in a world where a Donnie Yen movie can draw negative reviews? Perhaps, but “Special ID” also solidifies just how strong Donnie Yen’s (and Andy On’s) charisma and ability to carry action movies really is.

Making his return to the MMA-influenced action that he pioneered in Hong Kong action movies is Donnie Yen in the role of renegade cop Chen Zilong. It’s quite a welcome return, in point of fact; after several years of Yen being more widely known as a peaceful, scholarly sage thanks to the “Ip Man” films, it’s nice to see him be given a chance to return to the loose cannon persona he displayed in “Sha Po Lang” (“Kill Zone”) and especially “Flash Point”. In the role of the villainous Sunny is the American-born Andy On. Ever since providing a powerful adversary for Vincent Zhao (who, ironically, was originally meant to play this very role) to overcome in “True Legend”, On’s begun settling into a nice groove of playing cocky, colourful villains, and he’s perfectly suited for the kind of entertaining bad guy that Sunny embodies. Jing Tian portrays Chen’s undercover partner Fang Jing, while Collin Chou makes something of a cameo as the behind-the-scenes villain, Xiong. Unfortunately, he and Yen never face off in the entire film, but Ken Lo manages to partially fill that void in his duel with Chen in the opening scene of the film.

Hong Kong cop Chen Zilong has spent several years working undercover trying to infiltrate the Triad gang run by crime boss Xiong. With his extended assignment taking a heavy toll on his family life, Chen is tasked by Xiong to travel to China to investigate one of Chen’s old associates Sunny, who Xiong suspects of murdering another member of his gang. Chen agrees to take on the assignment, mostly because his superiors in the Hong Kong police force want him to check out Sunny, as well.

Upon his arrival in China, Chen is partnered with the more conservative mainland cop Fang Jing, and their opposing styles put the two immediately at odds with one another. Nevertheless, Chen’s investigation of Sunny initially goes off without a hitch. That is, until one of Sunny’s men is killed then Chen finding himself the prime suspect.

Sunny got his daily beats today….

And so did Chen

Lets ease you into a full split sir

Well ahead of its release, “Special ID” was already making headlines in China and Hong Kong, and not in a good way. The role of Sunny was originally intended for Vincent Zhao before a falling out between he and Yen saw him replaced by Andy On. That is quite possibly a blessing in disguise, given On’s performance in the role of Sunny, both in his characterization and in the action. Following a rather tepid beginning in 2001’s “Black Mask 2: City of Masks” (which also served as a launching pad for Scott Adkins and Silvio Simac) On’s gradually established himself as one of the most thoroughly entertaining villain actors in Hong Kong today.

For Western audiences, Robert Downey, Jr. or Nicolas Cage would approximate the same degree of colorful, over-the-top villainy that On embodies. On’s physicality is also very much on par with his character’s personality. By his own admission, On entered the Hong Kong film industry with a set of martial arts skills largely acquired by imitating Jackie Chan movies (how prophetic, given his two fights against Jackie himself in “New Police Story”.) Fast-forward a decade, and On is truly something else in his action scenes; the fact that he was so adept as a then-rookie in his aforementioned duels with Jackie makes the prowess he exhibits in “Special ID” all the more impressive.

The more seasoned Donnie Yen is no slacker, either. Within five minutes of the film’s opening, he dives head first into a duel with kicking machine Ken Lo. Once better known as Jackie Chan’s former bodyguard, Lo, like On, really comes alive in bad guy roles. His and Yen’s brawl is among the film’s two major action highlights, which unfortunately brings to light the Achilles’ Heel plaguing “Special ID”. The action in the middle section in the film is decent enough, including a kitchen battle between Chen and a swarm of Triad thugs, but it doesn’t manage to ascend to the greatness seen in Yen’s previous MMA-themed outings.

Drivers Ed is a little different in Hong Kong 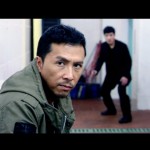 Come and get it fellas

Chen has the advantage at last

The alley fight between Yen and Wu Jing in “Sha Po Lang” (“Kill Zone”) remains one of the most incredible displays of weapons based combat in a contemporary action film. Similarly, his brawl with former Shaolin Monk Shi Yan Neng (credited as Xing Yu) in “Flash Point” was a raw and intense volcanic eruption of his character’s pent up anger projected through his fists. Each of Yen’s previous MMA thrillers felt like a full meal, while “Special ID” unfortunately feels more like getting the appetizer and dessert without a satisfying main course in between. But when it comes, the dessert, Yen’s final duel against On, is delicious, indeed! Preceded by a phenomenal car chase, it’s every bit as rough and violent as it needs to be, highlighting Yen’s adept choreography and his skill at interweaving the grappling arts popularized by MMA into fist and foot-based action. It also shows just how far Andy On has come, as well, with the tornado kick he executes mid-fight, is probably the biggest rewind moment.

The bad news is that “Special ID” is, unfortunately, the least of Donnie Yen’s MMA-films. The good news is that his and On’s performances in the film make it a far better movie than it would have been without them. While the middle section of the film leaves much to be desired, and Collin Chou spends most of the film warming the bench, it’s worth seeing for its opening and closing fights. Donnie Yen’s vast knowledge of martial arts and inventiveness in fight choreography is as evident as ever. Andy On’s combination of colourful personality along with his martial arts prowess make him a real compelling watch whenever he’s onscreen. (See him in “Once Upon A Time in Shanghai” if you doubt that.) 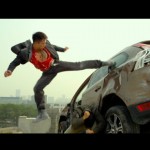 A perfect jump spinning back kick

A flawless tornado kick by Sunny