Jackie Chan returns for a fifth outing in his smash hit action series, with a much more serious tone of movie, this time playing a very different cop. Drowning his guilt with booze over a tragic error of judgement, a Hong Kong cop enters into a deadly game with a gang of thrill-seeking criminals. Co-produced and directed by Benny Chan.

Action legend Jackie Chan stars as “Inspector Chan Kwok-wing”, who seeks solace in a bottle when he blames himself for the tragic fate of his team.

Daniel Wu stars as “Joe Kwan”, the unhinged leader of a thrill-seeking gang, who treat crime as a game. Although Wu’s family are from Shanghai, he was born and raised in California, and studied wushu from the age of 11. His breakthrough role came in the Benny Chan-directed “Gen-X Cops”. He appeared in Teddy Chen‘s action thriller “Purple Storm” and received acclaim for his performance in “One Night in Mongkok”. In 2015 Wu took the lead role in the martial arts action television series “Into the Badlands”.

After retiring at the height of her acting and singing career in 1997, actress and singer Charlie Yeung made her return in this movie as Chan’s love interest “Sun Ho-yee”. Model and actress Coco Chiang plays Joe’s girlfriend “Sue Chow”. Popular Cantopop star Charlene Choi plays the young policewoman “Sa Sa”. 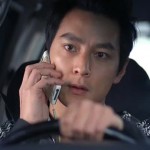 The heroic Inspector Chan gains acclaim with the rescue of a hostage. Soon after, a group of rebellious youths hold up a bank and order a member of staff to call the police. The gang play a sadistic game in which they are awarded points and money for shooting police officers, before making their escape.

Inspector Chan declares on the local news channel that he and his team will have this gang of “amateurs” in custody within three hours. Chan and his squad move in to arrest the gang after their hideout is revealed. However, it is rigged with booby-traps and the squad are taken out one by one. The gang pose different challenges for Chan to save the lives of his men. Being the sole survivor of the incident, Chan takes a year’s leave from the police force, drinking heavily to drown his sorrows and guilt.

A young man who identifies himself as PC 138, Frank Cheng persuades Chan to ease off the drink and reopen the case. Chan’s superior, Commander Chiu Chan believes that Chan’s arrogance alone was responsible for the disastrous raid one year earlier. Chiu challenges Cheng and Chan to solve the case before he does, with the loser quitting the force. 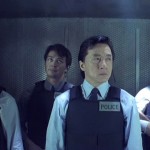 Inspector Chan and his squad

Chan is trapped in a deadly game

Chan declares war on the gang

The game gets ever more personal and deadly

Some of Asia’s brightest young stars

As the police close in on the gang, the games become deadlier and more personal. Chan must confront his demons and some unexpected revelations before any more lives are lost.

The opening credits show Jackie Chan giving it his all as a hopeless drunk, including a very realistic scene of him vomiting in an alleyway! Having established that this is definitely not Inspector Chan Ka-Kui (or Kevin Chan) from the earlier films, the first action set piece has Jackie rescuing a hostage from a man armed with a gun and a hand grenade. Jackie wrestles the gun and grenade from the hostage taker, and quickly shows he still has the agility to hurdle a barrier and dive headlong onto the tarmac, all in glorious slow motion.

Daniel Wu’s youthful but dangerous gang are introduced when they leap off the roof of a skyscraper with the night time, neon-lit Hong Kong skyline for a backdrop. Armed with assault weapons, they abseil into a bank. Police cars skid and crash to the scene as the gang, their faces hidden by sinister looking opera masks, wantonly open fire on the officers, capturing the whole thing on a camcorder so they can see who scored the most “points”.

Jackie swears to take down the gang, and he and his team descend on their hideout. After his squad are lured into a labyrinth of traps and strung up high in the roof of the warehouse, Jackie is confronted by the gang. Wu challenges Jackie in a race to field-strip a pistol, the stake being the lives of two of his men. Next Andy On challenges Jackie to hand-to-hand combat. Here we get some vintage Jackie, but also the fresh injection of Andy On’s youthful skill and speed. Every now and then Jackie has the help of a wire to fire off some of those double and triple kicks, but he still moves at a terrific pace. Andy On is a great foil for him and demonstrates that all-important rhythm that makes a Jackie Chan fight scene such a joy to watch. 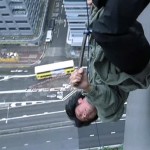 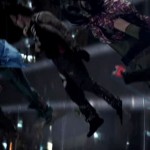 A highlight is the fight in the Lego exhibit

It wouldn’t be a Police Story film without a death-defying stunt!

Jackie Chan is back on the bus!

Nicholas Tse also demonstrates that he is no slouch in the fighting department, and makes innovative use of a telescopic baton to frustrate and immobilise two would-be muggers. With Jackie’s character’s descent into booze, you might think there would be some drunken boxing on the cards. But this is “Serious Jackie”, and although he is heavily under-the-influence, he simply ties up his attacker in a nifty move with his jacket. In a bar-room brawl, drunk Jackie fights in a much more realistic style, whilst Tse uses a few familiar moves, such as slipping out of the sleeves of his jacket, and then spinning and twirling it in defence against his opponent’s strikes. In this scene, Jackie’s drunkenness actually makes him more vulnerable, rather than the fluid and skilled fighter that we have seen in his other classics. As you would expect, everything to hand is used as a weapon from buckets of ice, to bar stools and the bar itself.

Of course it wouldn’t be a Police Story film without some crazy death-defying stunts. Having found some of the gang members at a rooftop BMX and skate park, Chan and Tse slide down the side of the building on ropes, as Coco Chiang rollerblades down it and Terence Yin scales it on his BMX! Jackie again shows that he is still in fantastic shape as he sprints after Yin over the roofs of Hong Kong’s walkways. Referencing the first two movies, Jackie ends up hanging off of the roof of a double-decker bus and leaping to avoid various street signs, as it smashes through the streets of Hong Kong in spectacular style.

After an explosion at the police station, things get personal and Chan and Tse confront the gang at the famous harbour-side Hong Kong Convention and Exhibition Centre. The highlight of this sequence is a duel between Jackie Chan and Andy On in a Lego exhibit. On’s kicks and speed match perfectly with Jackie’s fluidity and rhythm to deliver a knockout fight scene that’s as good as anything Jackie Chan has choreographed in the 21st century.

The movie concludes on the roof of the convention centre with an end stunt fittingly paying tribute to a similar one in the very first “Police Story” film. The standard outtakes during the end credits once again bare witness to the danger and injuries that Jackie Chan and his team endure to deliver the very best in action entertainment.

The police are shot at for points in a deadly game

Is Jackie Chan old enough for a bus pass

Jackie Chan’s “Police Story” films have set the bar pretty high when it comes to top-notch stunts and fighting action. The first film influenced Hong Kong cops-and-criminals action movies throughout the eighties, and its legacy can still be felt today in movies such as “Invisible Target”, “Flashpoint” and “Kung Fu Killer“, and even Hollywood films such as “Tango and Cash” or “Bad Boys II”. The third and fourth films in the franchise did well to maintain the quality of the action, but were much lighter in tone.

By the time “New Police Story” came around, Jackie wanted to demonstrate that he could deliver serious and dramatic acting performances, and not just stunts and comedy. The problem with this attempt to be taken as a “serious actor”, is that many scenes come across as too melodramatic, as if he is trying too hard to say to the audience, “Look! I’m crying! I am a proper actor!”. It’s a shame, because in movies such as “Crime Story”, “Little Big Soldier“, “Dragon Blade” and ironically, “Police Story 2013: Lockdown“, Jackie delivers very good (and much more natural) acting performances. Having said that, he is very convincing in the scenes where he is drunk!

More than anything, the Police Story series has always been about the action, and this film has much more success on that level. The shootouts can be very violent and brutal in places. The sequence in which Jackie’s squad are taken out is especially vicious, but it is in keeping with the gritty tone of the film, and adds to the threat that the criminal gang poses.

The action set pieces are all of the highest quality, and very well filmed by director Benny Chan. There are lots of little nods to the previous films, especially in the sequence with the bus, along with scenes that include a stuntman back-flipping onto a metal escalator, or any time something made of glass is destroyed. The fight scenes with Andy On are especially good and worthy of the standards set by the franchise.

The explosive action is top notch

The lives of his men are at stake

Modern stunts for a modern audience

Nicholas Tse has some fighting skills too

In terms of pacing, this film can be a little slow in places, and is perhaps a little too long overall, but when you do get to the action scenes, they are mostly satisfying. The young supporting cast are all good in their roles, and this is perhaps a fitting way to introduce a younger audience to the work of Jackie Chan.

This film is just about deserving of the “Police Story” name, but it is competing with one of the best series of action films ever made. In its stunt sequences however, it does still manage to give its rivals a good run for their money, and is worth watching for that alone!

Never Back Down 3 Trailer Arrives!