Sammo Hung stars as “Bold Cheung”, a kindly but naive villager who is taken advantage of by his wife and the wicked Master Tam.

A student of Madame Fan Fok Fa’s Peking Opera School, Chung Fat plays “Priest Tsui”. He started off his movie career as an extra on the movie “Enter The Dragon”, and can be seen as one of the fighters who takes on Bolo Yeung. A frequent collaborator with Sammo, he has appeared in “Warriors Two“, “Magnificent Butcher” and “The Prodigal Son“, to name but a few.  A supporting actor in classics such as “Fist of Fury“, “The Iron Fisted Monk”, “Snake in the Eagle’s Shadow“, “Knockabout” and many more, Peter Chan Lung, here plays “Priest Chin Hoi”.

Director, Action Choreographer and actor Huang Ha plays the wicked “Master Tam”. He has appeared in “Drunken Master“, “The Odd Couple” and “Mr Vampire”. The face of the “Jiangshi” (hopping vampire) genre, Lam Ching-ying is “The Inspector”. A star of Sammo’s “The Prodigal Son”, he would go on to find fame in the “Mr Vampire” series of films, and the similarly themed “Magic Cop”.

Familiar character actor Wu Ma plays “Ah Chiu Fa Kau”, who challenges Cheung to prove he is the bravest man in the village. Wu Ma appeared in over 240 films and is best known to fans for his roles in “Righting Wrongs”, “Twinkle Twinkle Lucky Stars” and “A Chinese Ghost Story”.

This zombie can kick!

There are some great fist techniques

Their speed, rhythm and timing is among the best filmed

The superstition about peeling an apple is genuine

The ropey effects add to the humour

The priest’s sword duel is one of the highlights

Claiming to fear nothing, Bold Cheung is challenged to spend the night in a haunted house during the traditional Chinese Ghost Festival.  He must peel an apple in front of a mirror, but if he breaks the skin, then the spirits will come for him! His friend is actually pranking him, but a real spirit appears, and the scene is set for Bold Cheung’s spooky encounters!

Cheung’s employer Master Tam fears his affair with Cheung’s wife will be discovered. He hires a priest specialising in the supernatural, Chin Hoi, to get rid of Cheung. When Chin mentions this to his partner Priest Tsui, Tsui gets angry. On his way to the trap set for him, Cheung bumps into Tsui, who tells him how to protect himself against the “jiangshi”, or reanimated corpses.

After surviving his encounter with the undead, Cheung returns to town, only to be framed for the murder of his wife. The local Inspector arrests Cheung and throws him into prison.

Escaping from jail, Cheung teams up with Priest Tsui to defeat Priest Chin Hoi and Master Tam, in an epic battle of supernatural wits and martial arts mastery.

The Jiangshi suffer from rigor mortis

The Inspector isn’t as brave as he thought he was!

The chicken scene is not for the squeamish 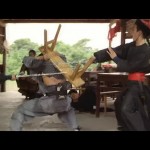 The bench can be a great shield and weapon

That moment when you wake up next to a maggot infested corpse!

Son of the Four Heavenly Kings

As you would expect in a Sammo Hung-led film, the action is the star of this picture. A spooky opening credits sequence gives us a hint of the mix of superstition, horror and comedy we can expect. As the film begins, it spends some time establishing the authentic Chinese superstitions and comic situations that Bold Cheung will find himself in the middle of.

Having boasted that he is the bravest man in the village, his first encounter with a spirit turns out to be his friends, who bet him he couldn’t last a night in a haunted house, playing a joke on him. A real spirit appears causing Sammo to perform the heaviest of pratfalls in a demonstration of his great physical comedy abilities.

His first martial arts scene arrives in the form of a hand-to-hand duel with a reanimated corpse, known as a Jiangshi. Being corpses, they suffer from rigor mortis, which means their limbs are rigid and they have to hop to get around. They are however supernatural, and have a limited ability to fly about! The Jiangshi in this film are reanimated by the rituals of Priest Chin Hoi. Using a wood Jian or straight sword as a wand, he conjures up the spirits with an acrobatic wushu routine. Sammo’s choreography of this fight is very inventive and comic, given the strange physical attributes of his opponent. Sammo throws his large frame about like it was a rag doll as the Jiangshi pursues him relentlessly. It is not to the detriment of the martial arts techniques however, and there are some great fist combinations.

Sammo does get to fight some human opponents, initially in his escape from prison. As in so many of his films he shows real power in his technique. Each blow looks like it hits full contact.

Sammo leaps for his life

Sammo bares all to protect his soul

No need for mats when you can somersault onto your mate!

All the classic kung fu films feature a fight in a teahouse, and this is no exception. In 1979’s “Knockabout“, Sammo leapt about “monkey-style”, and here, he pulls out all the stops. Taking on multiple opponents, Sammo flips and rolls over, under and off the tables and benches with a grace and lightness that belies his build. Of course, he still manages to include some great martial arts techniques, and uses a bench as a twirling, spinning weapon and shield, and still manages to fit in a comic pay-off at the end! This scene also allows the Chinese opera trained Lam Ching-ying to show off his skills too. There are virtually no cuts and the choreography moves at a terrific pace without the need for camera enhancement.

Taking place simultaneously, priests Tsui and Chin Hoi duel with their wooden Jians. A tremendous sword fight in it’s own right, the speed and timing of the weapons’ choreography proves a great taster for what is to come.

The final 15-20 minutes are dedicated to the battle of the priests and their disciples. Setting up high altars (whoever has the highest is closer to Heaven, and therefore more powerful), they summon different spirit gods to inhabit the disciples. Sammo is possessed by the famous Monkey King, and his opponent by the spirit of the son of the Four Heavenly Kings, who uses a hoop as a weapon. Jackie Chan is quoted as saying that Sammo “is built like an elephant, but moves like a monkey”, and here he demonstrates just that. Sammo somersaults and leaps over his opponent and every given obstacle as though gravity is just a minor inconvenience. Authentic Monkey Boxing techniques are applied against his opponent’s iron hoop, which is an odd, but difficult weapon to fight with. The height both performers achieve in their acrobatics is astonishing and amazes even more when Sammo lands a somersault with both his feet planted firmly on his opponent’s chest.

When Sammo finally faces Master Tam, he hasn’t just saved the best for last, but possibly one of the best choreographed sequences of his career, when he wields a spear against Huang Ha’s straight sword. Huang Ha obviously has some authentic skills in traditional sword work, and they are put to good use here. The blistering speed, timing and rhythm of the weapons technique from both performers is superb. There is no under-cranking of the camera, and plenty of long, wide shots, so you can really appreciate their technique and timing. Along with Sammo’s traditional weapons duels in “The Odd Couple”, this scene must surely rank among one of the best he, or anyone, has ever filmed.

The action concludes with an impressive full body burn fire stunt combined with a high fall to the ground below. 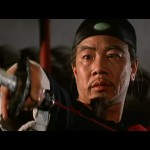 Lam Ching Ying is about to kick off

Lam Ching Ying as The Inspector

Huang Ha puts his sword skills to good use

Furniture can be jumped on, over and under!

I first saw this film on a grainy VHS tape many, many years ago, and I didn’t have the appreciation of Chinese superstition and culture that I now possess. Consequently, some of the humour was lost on me. I still thought the martial arts was impressive, and the teahouse and ending scenes are still among the best examples of traditional kung fu choreography out there. Now older and (hopefully!) wiser, the jokes make a lot more sense, and Sammo has a real gift for physical comedy in his encounters with the Jiangshi. Some of the special effects are a bit ropey, but they add to the humour of it all. In terms of the horror aspects, Sammo does a good job of mixing comedy and tension in the scenes where he is trying to hide from the undead. The controversial ritual sacrifice of a chicken may be in bad taste for some viewers, and is certainly not for the squeamish.

Overall, the film is well shot and edited, with a well-restrained use of slow motion, used only when it will impress most. The limited use of wires is always in context and, for the most part, you are witnessing the performers’ authentic, unassisted physical abilities.

Over the years, Sammo Hung has shown that he is comfortable plying his trade in any given genre, be it historical, comedy, drama or contemporary. With this film however, he invigorated a whole new sub-genre. This wasn’t the first supernatural martial arts movie, but it is possibly the most successful at combining the elements of Asian-style action, comedy and horror in one film. For that reason it is often credited as being the film that kick-started the “Jiangshi Film Genre”, leading to further classics such as “Mr Vampire”, “The Dead and the Deadly”, and “A Chinese Ghost Story”.

If you like a bit of supernatural fun or just want to marvel at some sublime kung fu choreography, “Encounters of the Spooky Kind” doesn’t disappoint!

Cheung with a Qiang!

Cheung suspects his wife is cheating on him

Cheung is possessed by the Monkey King

Bold Cheung is framed and jailed