Remaking a classic is always a dicey proposition, and one that becomes trickier still when the revamp in question is a cultural touchstone on the level of “The Karate Kid”. However, the 2010 remake of the beloved martial arts coming-of-age story is cognizant of how to properly bow at the altar of a sacred cow without tipping it over. By shifting the setting, the martial arts content and adding the one and only Jackie Chan into the mix in the mentor role, “The Karate Kid”, (title issues aside) delivers a worthy modern take on a tale near and dear to the hearts of millions.

It’s a culture shock to say the least for Dre Parker, when he and his mother, Sherry, move from Detroit to Beijing after Sherry’s car factory job gets transferred to China. The young American outsider does his best to fit in and make friends in his new home, along with developing a crush on his classmate and violin student, Meiying. However, Dre soon finds himself targeted by a gang of bullies under the leadership of the merciless Cheng.

Dre is further heartbroken when his hopes of joining a local kung fu school are destroyed when he learns that his bullies train there. However, after being rescued from a violent beating at the hands of Cheng and his followers by his apartment building’s maintenance man, Mr. Han, Dre’s rescuer takes him under his wing as his kung fu disciple, and prepares Dre to face his tormentors at an upcoming kung fu tournament.

Putting the film within the context of the rest of his career, “The Karate Kid” actually marks something of a turning point for Jackie Chan. It’s kind of surprising to consider how infrequently he’s taken on the role of martial arts mentor, though it’s hardly surprising that it fits him like a glove here. 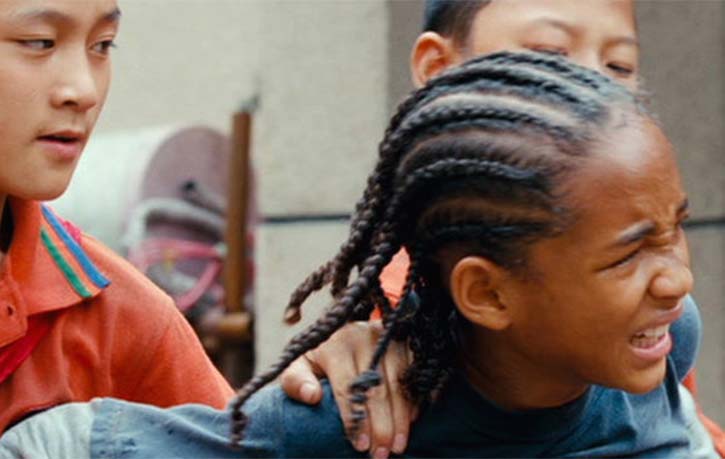 Dre gets bullied in his new home

Indeed, Jackie’s performance as Mr. Han is easily among his best acting performances. Mr. Han has clearly internalized the agony of his family tragedy far more deeply than the more well-adjusted Miyagi, and his relationship with Dre proves to be much more reciprocal in how much growth the two experience from one another. In the role of Dre, Jaden Smith also nails it and it proves to benefit the film that he’s a bit younger than Ralph Macchio was as Daniel-san.

First-time leading child star or not, Jaden Smith is consistently believable as a scared twelve year-old not only facing down bullies, but having to do so in a completely foreign land. Dre’s heartbreak, after finally discovering something he loves in his new home, to discover that his bullies are among the students of the local kung fu school is something you’ll be fighting back tears for, matched in the film only by Mr. Han’s drunken meltdown while mourning his deceased family for unbridled tear-jerking. You know a remake is doing its job when it can match, as Bruce Lee would say, the emotional content of the original, something “The Karate Kid” does splendidly!

As with the original, “The Karate Kid” places its focus on its protagonist’s martial arts training, with the action serving to bookend the film. Zhenwei Wang  comes across well as a threatening big screen bully in his portrayal of Cheng, and his first few scuffles with Dre put the latter through some surprisingly violent beatings. Daniel-san at least had the relative ‘comfort’ of getting beat up on a sandy beach, but Dre gets no mercy enduring his initial pummelling on solid concrete.

Dre and Cheng face off

Master Li teaches his students a doctrine of no mercy

Dre shows off his dance moves to Meiying

After moving to China Dre discovers the art of kung fu

Dre catches his opponent off guard

Jackie Chan only has one significant fight sequence in the film in Mr. Han’s rescue of Dre from Cheng and his gang, and here the film remains cognizant of just how best to approach remaking a classic, with Mr. Han at once going both harder and gentler on his young opponents than Mr. Miyagi did on his. However, the film really hits the bull’s eye in Dre’s training with Mr. Han, which begins not with waxing a car on and off, or painting a fence, but with the simple act of removing and replacing a jacket. It stills serves the same purpose of internalizing defensive manoeuvrers into Dre’s muscle memory, but is also the best illustration of how well the film is able to chart its own course, to say nothing of just how close it is to genuine “pushing hands” drills.

The film ramps up the intensity in the climactic tournament, with Dre and Cheng facing their respective opponents on a Lei Tai (elevated fighting platform) before finally going head to head. They really put each other through the ringer with a relentless vigour that most adults would find harsh. Just as it reshaped Mr. Han’s training methodology, the film also dances to its own beat by dispensing with the “No can defend” crane kick of the original for something a little more cerebral, and while the execution of it is perhaps a bit on the fantastical side, it’s still a solid crowd-pleaser.

Dre is unhappy in his new home

Meiying shows off her dance move to Dre

Dre puts his training to use

Cheng leaps in with a devastating kick

“The Karate Kid” walks a fine line between remaking and homaging its famous predecessor, and does so surprisingly well. Jaden Smith and Jackie Chan deliver knockout performances in both their dramatic and action scenes; the training sequences are superbly handled, and the film seemingly always knows exactly where and how to retool the most iconic aspects of the original to tell its own story. It’s no easy task to remake a classic, but as the closing soundtrack of “The Karate Kid” would say, “never say never”!

What are your thoughts on “The Karate Kid” remake, which moments made you smile the most? What other classic martial arts films would you LOVE to see get a modern makeover? Let us know in the comments below, join in the conversation, share this on Facebook, and follow us on Twitter & Instagram. Get more FU for your buck with KFK’s other movie reviews and check out this interview with the original Cobra Kai Sensei from The Karate Kid series, Martin Kove!)