There is a large ensemble cast featuring some of the most familiar names from the Shaw Brothers films of the 1970’s.

Bryan Leung Kar Yan, or “Beardy”, is “The Millionaire”. Daniel Lee from “City on Fire” and John Woo’s “The Killer”, is “The Sniper”. A youthful Andy Lau plays “The Student” and Star of “Blood Brothers” David Chiang plays “The Wanderer”.

Some time after the Japanese occupation of Nanking, China in the late 1930’s, a treaty is agreed by a new government set up in the city between the two factions. The truce is false and instead, China is to be handed over without a fight by the traitorous new regime, to become a colony of Japan. Mr Gao, a junior minister, learns of this plan and with the aid of Black Hat, steals the papers naming the traitors. Mr Gao seeks the help of Big Brother Shen, an honourable tycoon who controls Shanghai. The plan is to get Mr Gao to Hong Kong to expose the conspirators. A group of Chinese gangsters loyal to the Japanese are sent to execute Mr Gao before he reaches his destination. The mysterious Shanghai 13 are entrusted with his protection. However, a number of the thirteen have already been employed by the traitors……

Ti Lung tries to get the upper hand

Ti Lung gets to show his skill with the short pole

There are some great acrobatics in the finale

One thing “Shanghai 13” is definitely not short of is action! Although it takes a good twenty five minutes to get to the first proper action scene, the film rarely lets up from that point onwards.

The plot set up has Mr Gao moving from one set piece to another, with each subsequent protector having to fight the assorted gangsters and assassins sent to kill him.

The first fight features Chen Kuan Tai. In a short scene, he demonstrates his superior skill using just one arm to defeat his opponent.

Mr Gao is taken to a hotel, where he is guarded by “The Smoker”, Chiang Sheng. A group of thugs arrive at the hotel, and Mr Gao is hurriedly sent away whilst “The Smoker” single-handedly fights the gang. In this scene, the action is significantly raised several notches. Chiang Sheng acrobatically leaps, rolls, kicks and even demonstrates some ground-fighting against three Butterfly Knife wielding bad guys!

Mr Gao arrives at the laundry of “The Monocle”. Here it is revealed that not all are patriots. “The Monocle” takes a bullet to save Mr Gao, and still fights one-on-one with the would-be assassin. In a short and direct fight, the confines of the laundry give the fighters plenty of props to leap under, over and even through. “The Monocle” uses a spiked knuckle duster, turning the fight into a fairly bloody affair.

Perhaps to acknowledge his star-status, Chang Cheh extends the action for the appearance of Bryan Leung Kar Yan, who takes on Lu Feng and his fellow thugs. Bizarrely, some of the fight takes place in what looks like a living room. This does allow for some rather inventive choreography that employs the three-piece suite as a set of springboards and trampolines to somersault over and jump off of!

The next big-name to make an appearance is Andy Lau. At the time this was made, Andy Lau’s star was on the rise. He has an impressive battle putting his weapons skills to good use, although he is quite obviously doubled for some of the more acrobatic moves.

Shanghai 13 brings the house down

No time to be hanging around 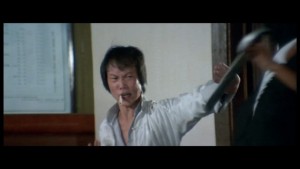 Chiang Sheng is The Smoker

Chi Kuan Chun feels the draft from that one

Chi Kuan Chun as The Leopard

The fight choreography returns to a more traditional style with a larger scale battle taking place in a casino. Real-life Hung Gar practitioner Chi Kuan Chun plays “The Leopard”, whilst Wong Ching as “The Bear” uses a traditional fan for a weapon, to take on David Chiang.

With hardly a pause for breath, the fight to protect Mr Gao continues outside in an industrial area. Ti Lung arrives to help save the day from a seemingly infinite number of thugs. This sets up some of the best of the choreography of the film, with the stunning acrobatics of Cheng Tien Chi, and some fine weapon work from Ti Lung. The finale is almost twenty minutes long, with virtually no breaks from the action!

The choreography throughout is very much in the style of the older Chang Cheh/Shaw Brothers productions, and uses the fast camera zooms, tracking shots and slow motion that were a trademark of Chang Cheh’s work. Most of the villains are carrying bladed weapons of some description, so there is a lot of bright red theatrical blood spraying about in most of the scenes.

The action is relentless as we move from one star to the next, each getting their own battle scene until the crescendo of the grand finale.

By the early eighties, Chang Cheh had left Shaw Brothers and was producing his own films. These were mostly low budget features, and “The Shanghai 13” is no exception.

Although set in the 1930’s, it looks like much of it was shot in fairly modern hotel lobbies and offices. As is common in older Hong Kong flicks, the soundtrack has been ripped off from other Western movies. I definitely heard bits of music from “Octopussy”, and I’m pretty sure there was some “Conan the Barbarian” and even some incidental guitar from “The Professionals”, a popular British television series in the seventies and eighties.

I watched both the subtitled and the dubbed versions which helps bring me to my conclusion for this review.

“The Shanghai 13” is a bit of a guilty pleasure. A hark back to the “late night” screenings of kung fu movies. Although the film and story have been made earnestly and seriously by an Asian cast and crew, to a Western audience it is like a pantomime. The dubbing is dire and there are some strange translations in the subtitles, but that is part of the charm. The bad guys are meant to be booed, we are meant to cheer for the heroes, and laugh at the unintentionally funny dubbing. Although this doesn’t hit the heights of Chang Cheh’s more obvious classics, there is plenty to enjoy in the fight choreography. At nearly sixty minutes of fight scenes alone, the main problem is where to pause for a breather!

Cheng Tien Chi gets the boot in on Ti Lung

Beardys peace is about to be disturbed

Beardys 3 piece suite is turned into a trampoline

Andy Lau proves to be pretty handy in the weapons department

A nice knee to the throat

The Terracotta DVD features a clean picture with vivid colours, the choice of the original Cantonese soundtrack with English subtitles, or the much more amusing dubbed version (I usually hate watching dubbed films, but I make an exception in this case!). Extras include interviews with Sonny Yu and Lu Feng, who discuss their martial arts training and working with Chang Cheh and for Shaw Brothers. There is also a stills gallery of “The Shanghai 13” lobby cards that plays along to the cheesy electric guitar theme of the movie.

It is sometimes easy to dismiss some of these classics because they are not as hi-brow or stylish as something like “Crouching Tiger, Hidden Dragon”. Interestingly, Teddy Chen’s “Bodyguards and Assassins” (2009) has a similar plot to “The Shanghai 13”. The 2009 film is a better acted, better told story, but with a MUCH bigger budget and MUCH less, albeit very stylish, action.

If you want some pure old school action, with a “Who’s Who” of Shaw Brothers stars, and a bit of an unintentional laugh, get some mates round, get the drinks in, and sit back and enjoy some non-stop kung fu fighting!