Three action packed comedy classics come to Blu-ray for the first in the UK from brand new 4K & 2K restorations! The original trilogy of Lucky Stars films were massively successful both in Hong Kong and internationally.

The director and lead actor in all three films is the legendary Sammo Hung. In a career spanning six decades, he has worked with some of the best in the business, from Bruce Lee to Jackie Chan. His work as a performer, choreographer and director helped to reshape and evolve modern screen fighting action as we know it. For the Lucky Stars films, Sammo assembled a virtual “who’s who” of some of the best talent in the Hong Kong film industry. Many of the stars appear in all three films, sometimes playing different characters.

Popular Taiwanese actress Sibelle Hu appears in the second and third films as police office “Barbara Wu”, a role that lead to the successful spin-off series of “The Inspector Wears Skirts” action films. 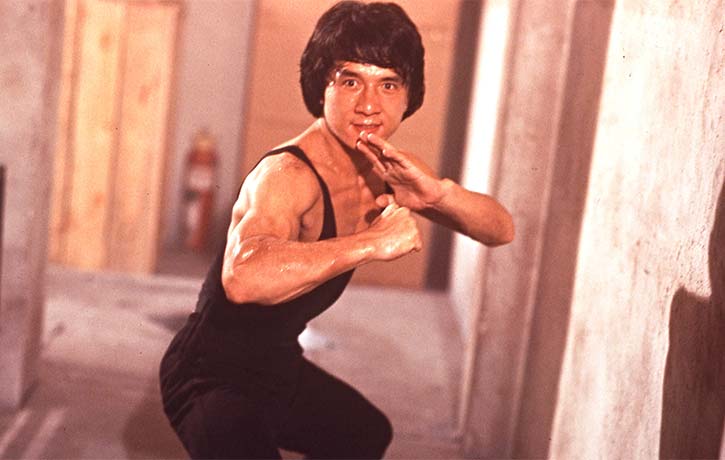 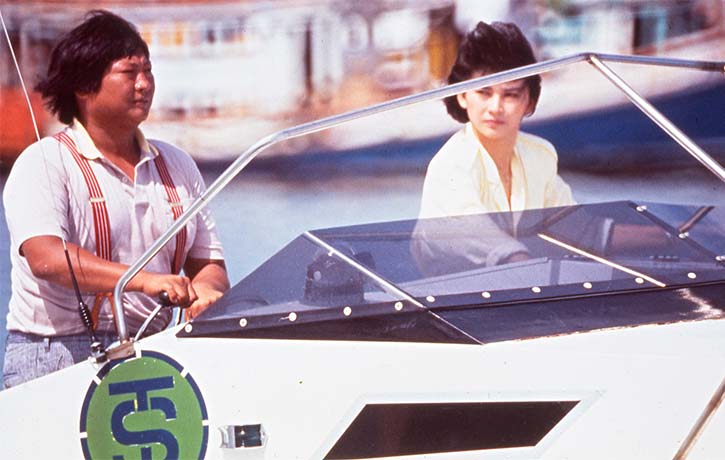 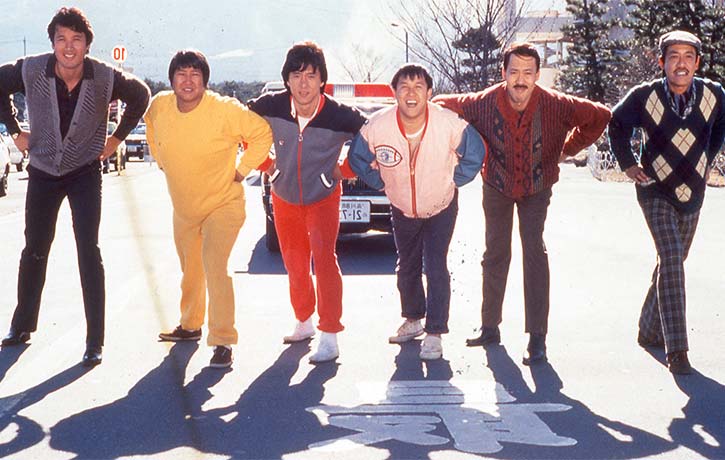 A real whos who of popular stars 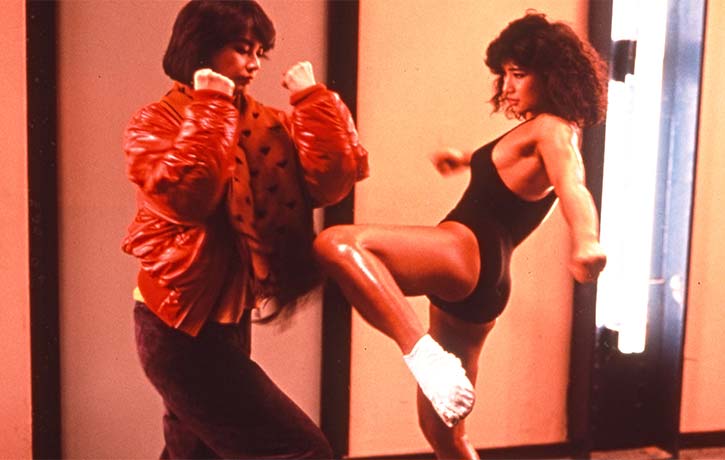 Five former prisoners form a cleaning company and endeavour to keep clear of crime, but inadvertently find themselves in the middle of a counterfeit money scheme, and now the Triads and the police are out to get them!

The Lucky Stars are sent to Japan to help the police apprehend a gang of dangerous criminals and a corrupt cop. Chaos ensues with our heroes storming an amusement park to face off with the villainous gang.

The Lucky Stars wreak havoc in a holiday paradise having been tasked with looking after a beautiful witness who has information about a dangerous crime syndicate. In between chasing after the young lady, our heroes must survive and eventually face the syndicate’s deadly assassins. 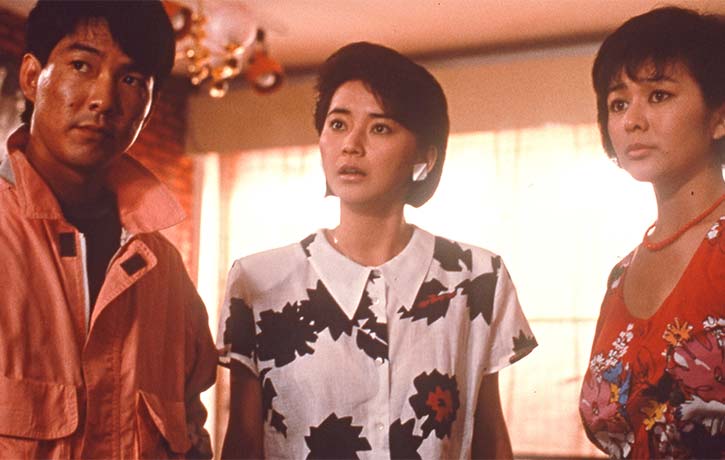 The cops must protect the witness 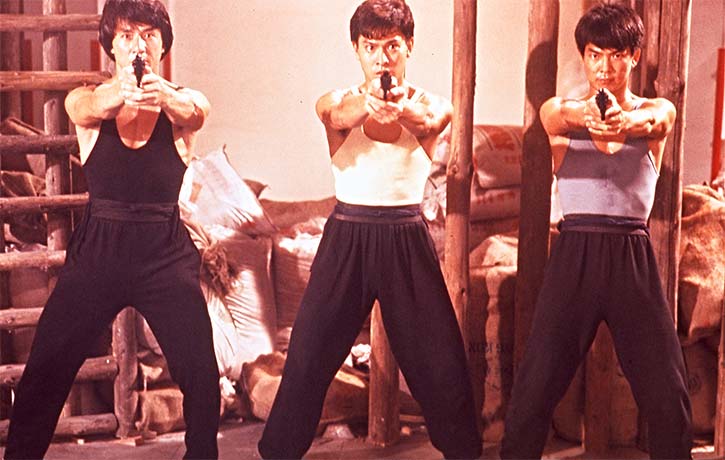 Although being very much first and foremost bawdy comedy films, there is no denying that each movie features some of the best Hong Kong action sequences of the eighties “Golden Era”.

The comedy chaos opens with Sammo Hung as a hapless burglar whose bungled escape puts him straight into police custody!

Each character is subsequently introduced in their own comic set up. Although played for laughs, it’s an entertaining way to introduce the various personalities.

Action highlights include Sammo and Jackie taking on some thugs in a food court, Yuen Biao’s high-kicking introduction, a brawl at a dinner party, and an awesome warehouse fight led by Sammo and featuring some of the best screen fighters in the business. 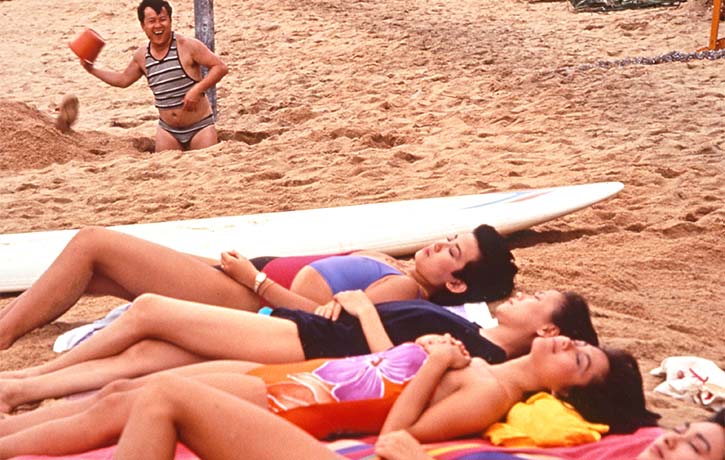 Eric Tsang tries to get the girls 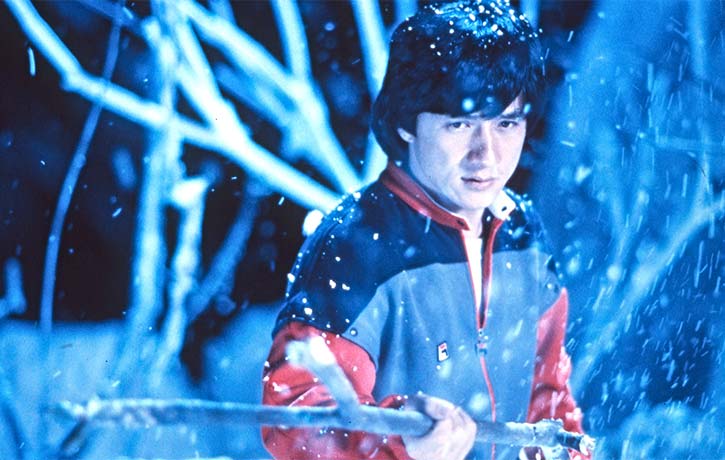 Trying to master the supernatural

A standout sequence is an incredibly dangerous high-speed car chase featuring Jackie Chan on roller skates. Even though he is occasionally doubled, it is another example of the death-defying lengths Chan goes to in the name of entertainment.

A highlight in this film’s extra features is a TV appearance with the stars of the movie performing song and dance numbers. Their Cantonese rendition of “Putting on the Ritz” is the most entertaining version I have seen since Mel Brooks’ classic comedy “Young Frankenstein”!

Opening in Tokyo with Jackie Chan and Yuen Biao pursuing Lam Chin Ying and Lau Kar Wing, there are some insane car stunts before we get down to the physical stuff in an amusement park.

Jackie does some incredible stunt work climbing up a Ferris wheel before our heroes indulge in some slickly choreographed fights.

Back in Hong Kong, as with the first film, each character is introduced in a comedic situation that reveals their personality. 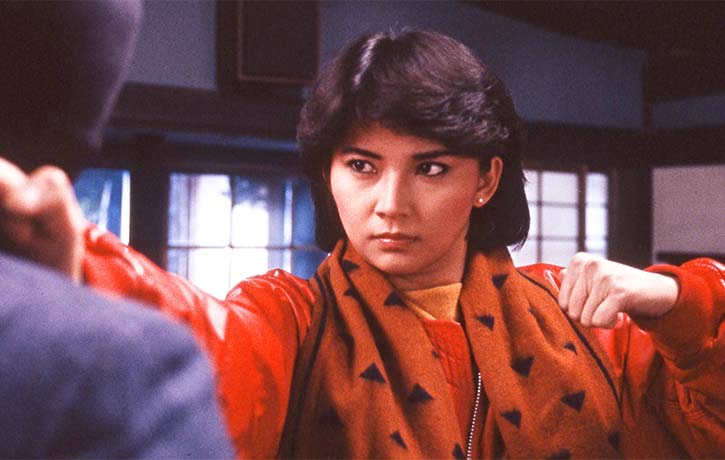 Inspector Wu holds her own 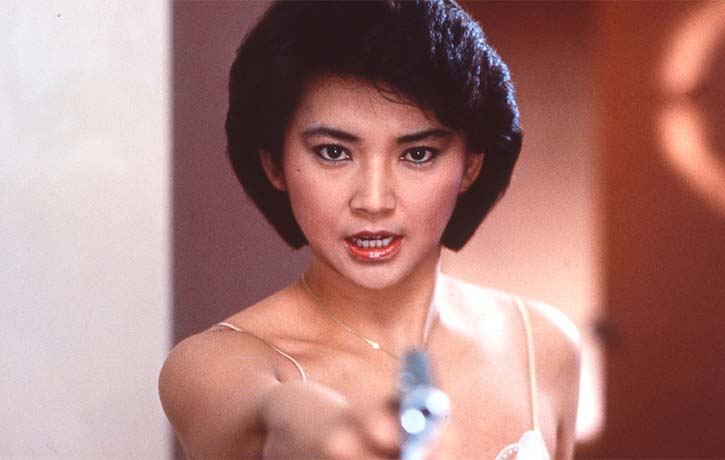 When Sammo eventually teams up with Jackie they are joined by Sibelle Hu in an excellent fight with a gang of balaclava-wearing assassins.

The finale returns to the amusement park, starting with a sinister sequence as Jackie Chan makes his way through a creepy Japanese haunted house. Meanwhile the Lucky Stars fight their way free of the mobsters.

As usual, the Lucky Stars are introduced with various visual gags and set ups.

Richard Ng once again takes the lion’s share of the laughs in a new quest for supernatural powers.

Matters take a dark turn however as villains Chung Fat, Yasuaki Kurata and Richard Norton enter the fray as deadly parasailing assassins. This leads to Sammo and our heroes having to fight off a gang of lethal machete-swinging, ladyboys! 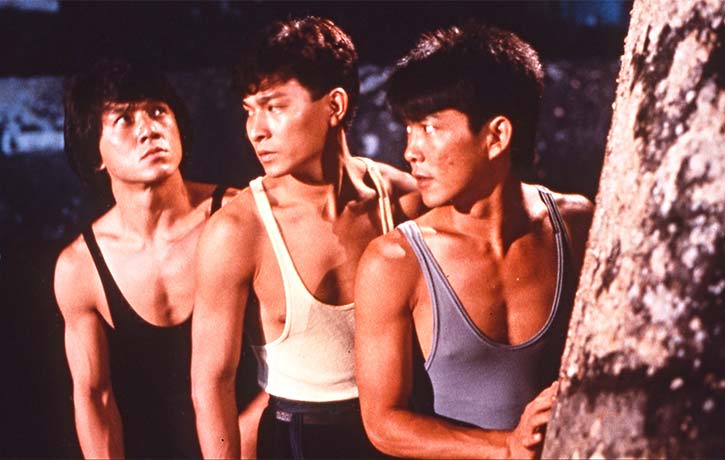 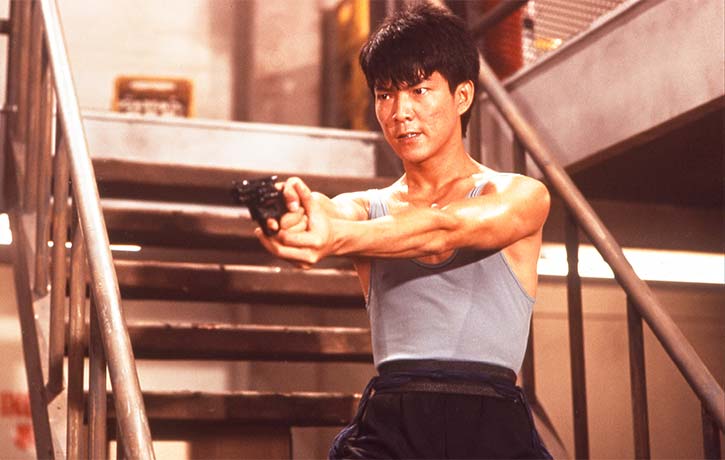 TTLS strikes the best balance between the humour and action

Jackie Chan, Yuen Biao and a guest-starring Andy Lau have a barnstorming introduction as they interrupt a gang of criminals led by Dick Wei, Philip Ko and Lau Kar Wing in a warehouse raid.

There are some astonishing elements featured in the choreography. Yuen Biao in particular, pulls off a stunning sequence of a side somersault into a whirlwind kick to one leg and spinning back kick, all in one shot. It’s an all-time classic eighties Hong Kong fight scene, setting the action bar particularly high.

When Jackie eventually encounters Richard Norton the full-on frantic fight that ensues is a great example of why Norton had such a glittering career in Hong Kong action films.

Not only does he have that particular rhythm that is unique to the genre, he looks great delivering the physical and the acting beats.

Michelle Yeoh makes a great little cameo appearance as a judo teacher, who the Lucky Stars wrestle with in their usual inimitable style. 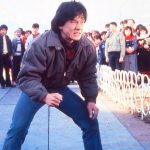 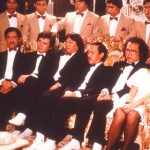 Fans of these classic movies are in for a real treat 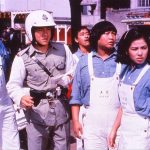 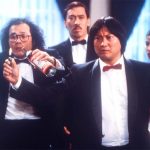 The hapless heroes inevitably end up embroiled in the villain’s caper, teaming up with Jackie Chan and Yuen Biao for a rip-roaring finale.

It’s a truly great fight scene from the Three Dragons that is enhanced by them having truly great foils in Richard Norton, Chung Fat and Yasuaki Kurata.

The way Chan flips over, onto and off the surrounding furniture as he evades Kurata and his Sai is incredible. Yuen Biao is in his usual high-kicking acrobatic form, but looks especially powerful and muscular as he gives Chung Fat a sound beating. The highlight though is Sammo using a pair of tennis rackets as weapons!

These films are a real who’s who of some of Hong Kong’s most popular stars. Aside from the main cast, fans will recognise stunt players and actors from the 1970’s to the present popping up every few minutes.

Each instalment features some amazing stand-out stunts and fights, that are still referenced to this day. This is also a rare trilogy in which each subsequent film improves on the last. 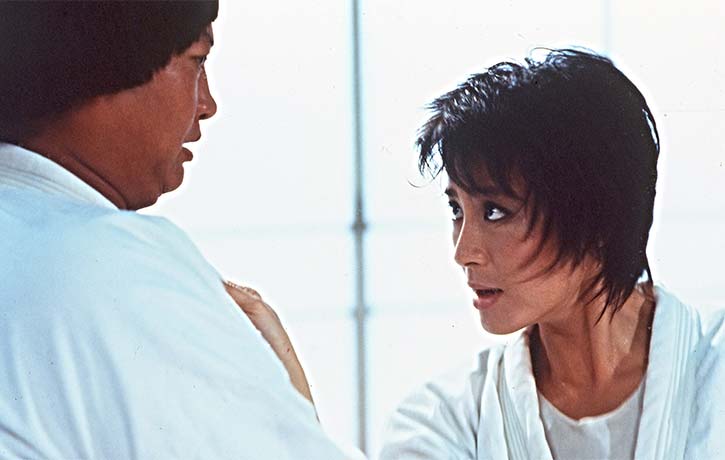 Michelle Yeoh has a cameo as a judo teacher 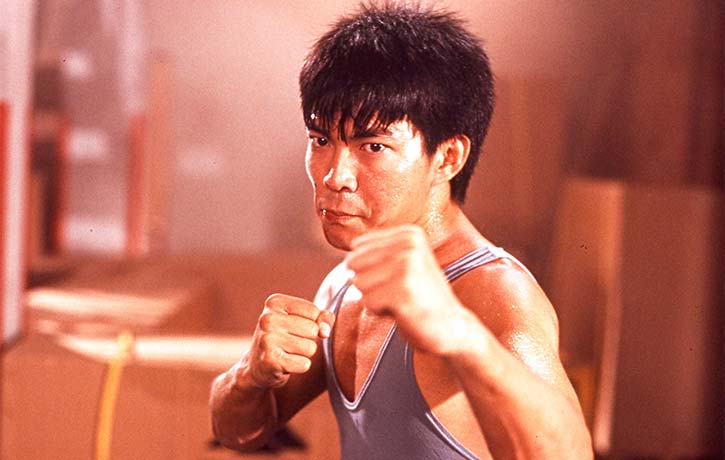 If you are offended by the humour in a Carry On film or Benny Hill’s brand of comedy, you really aren’t going to get on with these films.

A lot of the sexist comic situations really have dated badly. The biggest problem with all three films is that if you don’t enjoy the comic scenes, they do fill large gaps between the exemplary action sequences.

Even so, the main cast can still raise lots of laughs with their crazy personalities and slapstick comic timing. Which is handy, as these films fall more into the “comedy” category than they do the “action” one.

When we are treated to the action, what a treat it is! The third film, “Twinkle, Twinkle, Lucky Stars” for me, strikes the best balance between the broad humour and the action, and arguably features the best fight choreography of the trilogy.

Extra features on Eureka’s Blu-rays include extended and international cuts, new and restored original audio options, audio commentaries by Asian film expert Frank Djeng, interviews with the various stars, behind-the-scenes featurettes on all three films originally produced for their Japanese releases, along with outtakes and NG (“No Good!”) shots for all three films. 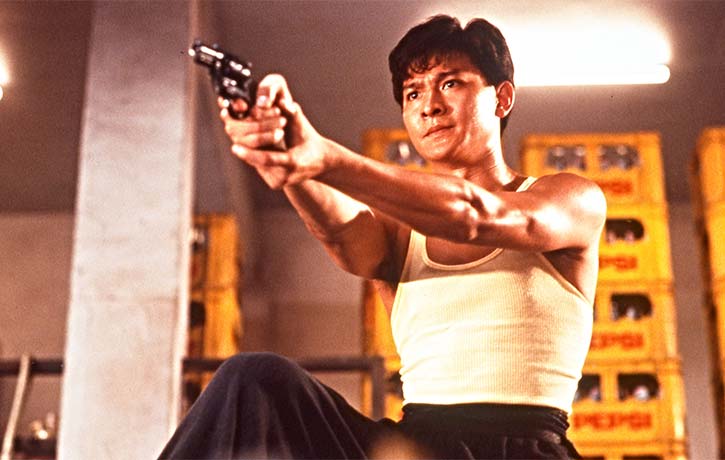 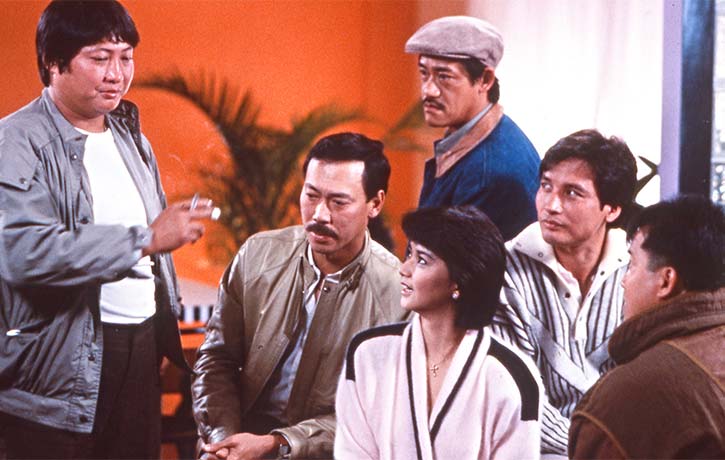 The first limited edition print run is also packaged with an excellent booklet featuring essays on each film from James Oliver.

Fans of these classic movies really are being treated over and over again with a constant stream of fantastic Blu-ray releases. The Lucky Stars Trilogy will definitely make another exceptional addition to your collection! 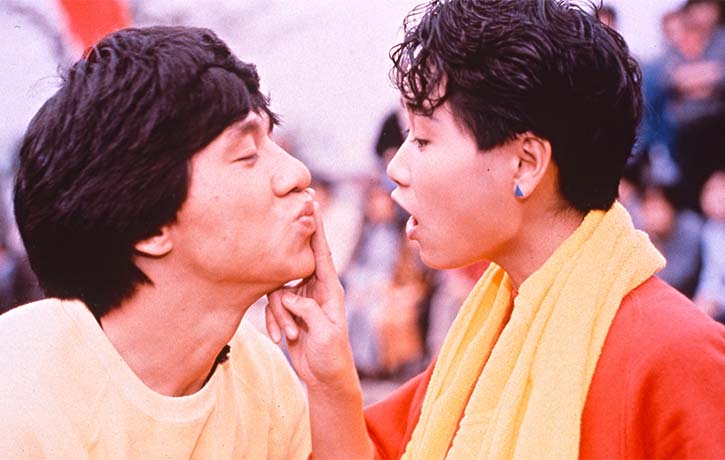 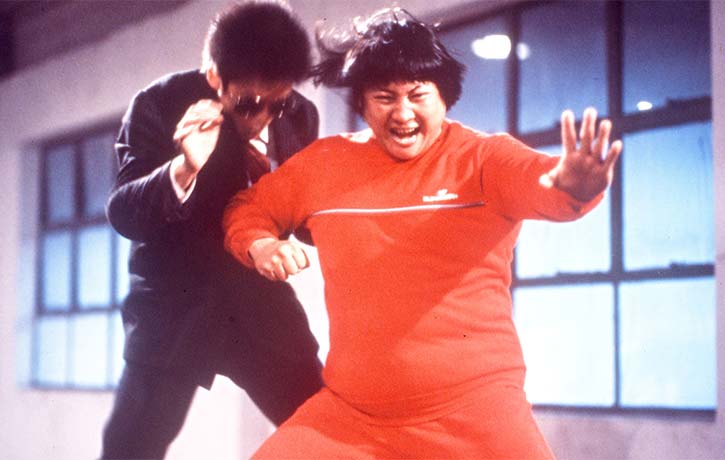 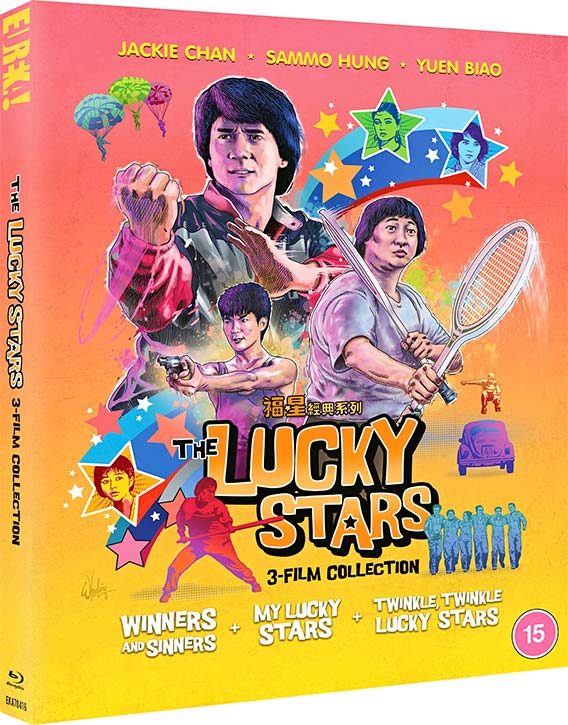 STAY TUNED TO KFK FOR YOUR CHANCE TO WIN YOUR COPY OF THE LUCKY STARS TRILOGY ON BLU-RAY!

You can also order your copy of this must-have kung-fu, action-comedy collection available MARCH 22, from Eureka Entertainment and Amazon!

THANK YOUR LUCKY STARS that you can RELIVE 80’s action magic in the FUniverse, check out Jackie Chan’s Top 10 Fight Scenes, these Top 10’s, Top 5’s, interviews, JOIN LUCKY WINNERS in KFK gear and subscribe for a MEGADOSE of FU on YouTube!