Film producer, director and former Shaw Brothers actor, Derek Yee Tung-sing stars as “Secret Agent 001/ Wong”. Yee featured in over forty movies for Shaw Brothers before becoming a screenwriter and film director. He received much acclaim for the 2004 film “One Night in Mongkok”, which won multiple awards.

Comic actor Richard Ng Yiu-hon, star of the “My Lucky Stars” and “Pom Pom” series of films, plays it for laughs as the conman “Paulina Wong”. Actor and Composer Lowell Lo Koon-Ting plays “Lord Youda”, the chief Chinese official of the city of Kaal. As an actor he has appeared in “Pedicab Driver” and the “It’s a Mad, Mad, Mad World” movies. As a composer he has lent his talents to films such as “Painted Faces”, “God of Gamblers”, “Pantyhose Hero”, “She Shoots Straight”, “Twin Dragons”, and “Once Upon a Time in China and America“, to name but a few.

Cindy Lau Chin-Dai appears as “Chin-chin”. In a varied career she appeared in several romance and comedy films, as well as action movies “A Better Tomorrow II” and “Ninja Evil Strike”. The legendary superkicker (and Kung Fu Kingdom Hall of Famer!) Hwang Jang Lee stars as the tough and highly skilled “General Toga’s Henchman #1”. He has appeared in dozens of classic kung fu movies including “Snake in the Eagle’s Shadow”, “Drunken Master”, “Secret Rivals 2”, and “Hitman in the Hand of Buddha”.

Following the invasion of Manchuria, China in 1931, Japanese army General Toga plans to build a chemical weapons factory in the distant Chinese enclave of Kaal. Chinese patriot, ace pilot, smuggler and highly skilled fighter Fok Ming-Ming is hired to assist super spy Agent 001 in a mission to assassinate the General and stop the plant being built. During their mission, a mix up sees con artist Paulina Wong reluctantly joining their cause.

Fok Ming-Ming’s mission sees her attempting to rescue Lord Youda, the chief of the city of Kaal who is unwilling to allow the Japanese to build their plant there. The final onslaught sees Yeoh leading the city’s inhabitants against the heavily armed Japanese soldiers.

As Fok Ming-Ming, Michelle Yeoh launches into action, single-handedly taking on a village full of bandits and gunrunners. Like a female kung fu Indiana Jones she wields a whip with accuracy and ferocity, striking, trapping and kicking anyone in her way.

Commuting around the Chinese countryside in her biplane, Ming drops in to save her Grandpa from two nefarious agents. Michelle Yeoh’s background in ballet has given her a unique flexibility and graceful style in her action roles, and it is realised especially so here. Using a rope dart she skilfully battles the two agents with plenty of slow motion to show that it really is Michelle performing most of the action with what is an undoubtedly cumbersome weapon.

One for all and all for one

Comic actor Richard Ng’s introduction allows Cindy Lau’s Chin Chin to show off her impressive fighting skills. Although petite she more than holds her own against a pair of burly thugs.

When Ming and Agent 001 take on two Japanese agents, played by action veterans Fung Hark On and Lo Meng, the fighting steps up a gear. It’s very much from their mentor Sammo Hung’s school of fight choreography with every kick and punch looking absolutely solid.

When Hwang Jang Lee turns up in a movie you can be sure of witnessing one of the most sharp-skilled high kickers in the business, and this movie is no exception.

A battle to escape a Japanese occupied village is as exciting as any sequence you might see in a similar movie such as Jackie Chan‘s Armour of God. Mostly wielding spears, Michelle Yeoh takes on up to four or five opponents at a time. As with every weapon she handles, Yeoh looks like a natural expert as she twirls a spear around her body, Chinese opera style.

The action takes her up and over the buildings and rooftops with plenty of stunning stunt work and pyrotechnics to complement the exemplary fighting.

The final battle initiates on a huge scale, featuring hundreds of extras and lots of pyrotechnics. Heavily outnumbered, our heroes have to use many ingenious traps and set ups to gain the upper hand. There is a particularly stunning shot of Michelle Yeoh spin-kicking the thick wooden post of a flaming shelter, causing the roof to collapse on her opponent. 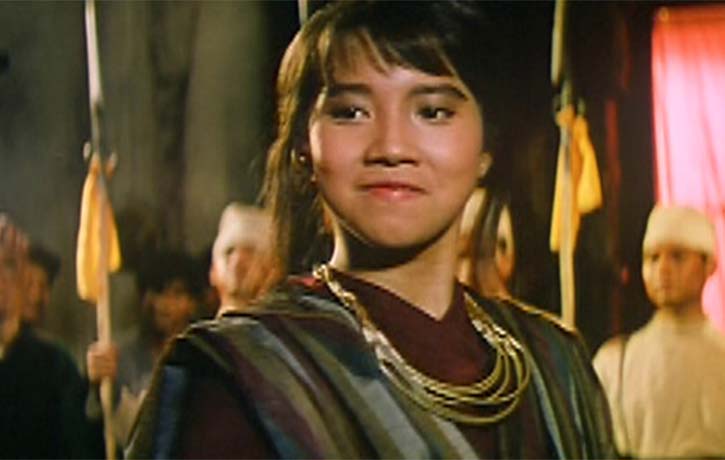 Have you seen this man

As a showcase for the young Michelle Yeoh’s varied martial arts talents that would expand and improve throughout her career, and even to this day with her contribution to the action in “Star Trek: Discovery” and “Master Z: The Ip Man Legacy“, the magnitude of mayhem in “Magnificent Warriors” offers many entertaining examples.

I can’t help thinking that when they made Jackie Chan’s “Railroad Tigers” they should have watched this film first. Although the humour is very broad, this is a real rip-roaring adventure in the best traditions of a “Boys Own” tale. Don’t make the mistake of thinking this is some antiquated misogynistic affair though. Michelle Yeoh is front and centre and is the absolute “Alpha” character throughout. And even though the humour is pretty goofy, Richard Ng, as he has done in so many movies, steals every single comic moment magnificently.

The expansive sets, locations and large-scale practical effects give this movie a big-budget feel. The only thing that perhaps undermines the epic atmosphere of the movie is the repetitive and uninspiring music score.

In a Chinese movie this action-packed, the scant plot inevitably becomes secondary. But with barely ten minutes passing between each action sequence, you hardly get time to worry about the story.

If you are a fan of movies such as “Armour of God” or “Millionaires Express”, this doesn’t quite match the quality of the one-on-one fights, but it gets pretty close when it comes to entertaining adventuring! Well worth a watch!

How will our three warriors escape this one

Time for a little lesson

Remember “Magnificent Warriors” from some 37 years back…? Does it rank as among your favourite Michelle Yeoh movies; what do you think are Michelle’s most memorable fight and action moments? Which other 1980’s classic martial arts movies have you enjoyed watching, and are perhaps revisiting now, and which ones would you like to see our team review and resurrect?

Let us know in the comments below, join in the conversation, share this on Facebook, and follow us on Twitter &Instagram.
OKAY WARRIORS don’t be a worrier, stay Magnificent; get KFK’d with these movie reviews, Top 5’s, Top 10’s, exclusive interviews, order your own KFK gear in time for Christmas, and subscribe for more Magnificent martial arts mayhem on YouTube!