“Dragons Forever” was the last great hurrah for the “Three Dragons”, Jackie Chan, Sammo Hung (who also directs alongside Corey Yuen) and Yuen Biao. It went on to become one of their greatest ever collaborations! “Dragons Forever” arrives on a magnificent 4K restoration, uncut on UK Blu-ray for the first time, courtesy of 88 Films and can also be ordered via Amazon!

Jackie Chan stars as “Jackie Lung”, a womanising lawyer. He co-stars alongside his Peking Opera brothers, Sammo Hung, as a would-be arms dealer called “Luke Wong Fei-hung”, and Yuen Biao as “Timothy Tung Tak-biao”, a crazy cat burglar. The “Three Dragons” had teamed up successfully many times over the years in movies such as “Winners & Sinners”, “The Lucky Stars” films, “Project A” and “Wheels on Meals”.

Their fellow opera brother and a frequent collaborator with the trio, Yuen Wah stars as the villain “Hua Hsien-Wu”. Yuen Wah famously doubled for Bruce Lee in “Enter the Dragon” and had significant roles as villains in “Eastern Condors”, “The Iceman Cometh” and “She Shoots Straight”. He became internationally known for his role as the “Landlord” in the box office smash “Kung Fu Hustle”.

The popularity of the much-heralded end fight from “Wheels on Meals” saw real-life full-contact kickboxing champion Benny “The Jet” Urquidez returning as a henchman, to face off against Jackie Chan once more. Aside from his astonishing unbeaten fighting career, Urquidez had previously appeared in the 1981 movie “Force Five”, which also starred Joe Lewis and Richard Norton. His fighting expertise has also been utilised on-and-off camera for Hollywood movies such as “Road House” and “Grosse Pointe Blank”. 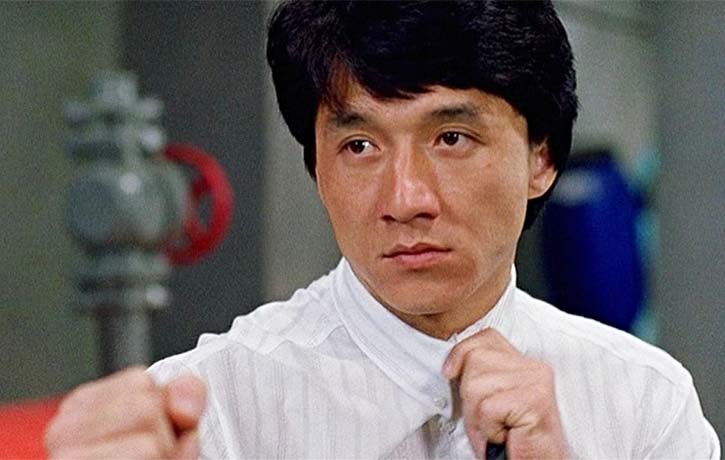 Winner of Miss Hong Kong 1987, Pauline Yeung Bo-ling stars as the Environmental Scientist “Wen Mei-ling”. She has evidence to help her cousin “Miss Yip”, played by award-winning actress and singer Deannie Ip, whose fishing business is being polluted by a local chemical company. Actress Crystal Kwok plays Jackie Chan’s put-upon legal assistant. She would go on to appear as a policewoman in “Police Story 2”.

The rest of the supporting cast is a real who’s who of Hong Kong film talent. There are many familiar faces from both Sammo Hung’s and Jackie Chan’s Stunt Teams, as well as frequent co-stars including Phillip Ko-fei, Dick Wei, Lau Kar-wing, Fung Hark-On, Chung Fat, Lam Wai, Billy Chow, Chin Kar-lok and Lo Lieh. Popular Hong Kong actors Roy Chiao and Stanley Fung have cameos as a Judge and Psychiatrist respectively.

When a lowly Hong Kong fishery takes legal action against a local chemical factory for polluting the water, the sinister chemical company hires lawyer Jackie Lung to find evidence that will discredit their claim.

He employs his arms dealer friend, Luke Wong Fei-hung to become friendly with the fishery owner, Miss Yip in a bid to convince her to settle out of court. Lung also brings in his crazy cat-burglar colleague, Timothy Tung Tak-biao, to bug her apartment. Unfortunately, Wong and Tung are unaware of each other’s roles and confusion soon ensues.

Benny the Jet Urquidez is back for Round 2 with Jackie

Wong unexpectedly falls for Miss Yip, whilst Lung woos her cousin, Wen Mei-ling, an environmental scientist who is going to testify on Miss Yip’s behalf. The three men inadvertently discover that the chemical company is a front for a narcotics empire, run by the ruthless gang boss Hua Hsien-Wu. With their initial deceptive intentions reversed, the Three Dragons head towards a brutal showdown with the boss’ henchmen and Hua himself.

Each character has a physical introduction leaving the audience in no doubt about each character’s capabilities.

Yuen Wah is up first, as his deadly, cigar-chomping, psychotic villain, viciously puts down a rival gangster. 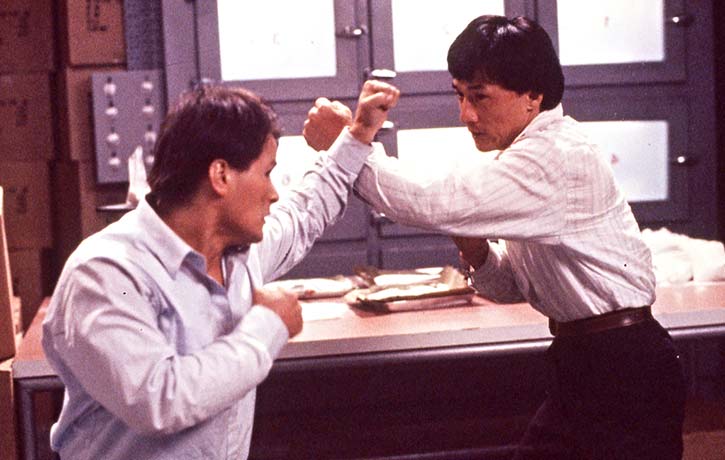 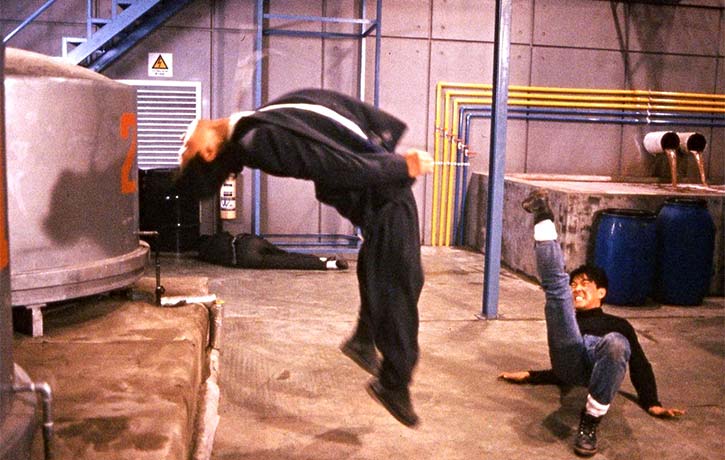 Jackie Chan has a little skirmish when his lunch date is interrupted. It features his signature fast-moving style with a little acrobatic stunt work and physical comedy.

Sammo, as you would expect, gives a pair of would-be robbers a robust lesson in the power of his punches and kicks, and still finds time to throw in a little Peking Opera.

Yuen Biao is introduced with an inventive sequence that demonstrates his sublime acrobatics and high-kicking skills.

Perhaps in a move to keep things fresh, each of the stars plays a different character than the audience had become accustomed to when this was made. Jackie is a philandering womaniser, who even slaps a girl in one scene, Sammo is a loveable but hopeless romantic, and Yuen Biao is a complete nutcase!

Last hurrah for the Three Dragons

Sammo finds time to throw in a little Peking Opera

A Tale of Three Dragons…

Whenever the Three Dragons are together on screen, there is a real “Three Stooges” slapstick feel to the consummate action. The choreography, speed and rhythm is as ingenious as it is thrilling. These scenes are really only matched by the three leads’ other works together.

When our hapless heroes get into a bar fight, it is a real who’s who of Hong Kong action performers. This allows for some truly impressive, and bone-crunching action. Jackie Chan’s fight on a luxury yacht is packed to overflowing with his trademark flourishes, as he finds unique ways to negotiate his surroundings and dispatch the bad guys.

However, it is in the film’s finale where our stars, joined by the likes of Yuen Wah, Benny Urquidez and Billy Chow really hit their peaks. The impacts suffered by all concerned are among the hardest-hitting in the history of screen fighting. It is testimony to the unique skills of the eighties Hong Kong action teams and truly astonishing that no one was seriously injured or hospitalised. 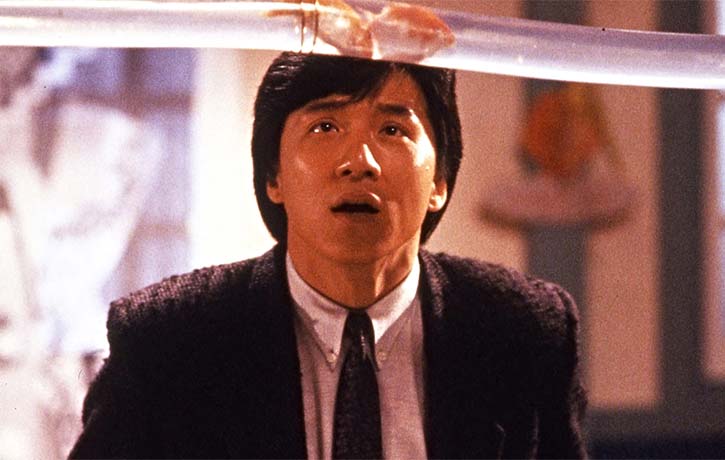 Yuen Biao’s astonishing wire-free acrobatics on the gantries and stairs is captured in jaw-dropping slow motion, whilst Sammo delivers the biggest blows to the bad guys. Fans of the end fight in “Wheels on Meals” between Jackie Chan and Benny Urquidez, are treated to a fabulous rematch in this entry. It amounts to one of the best end-fight sequences that Jackie Chan, Sammo Hung and Yuen Biao have delivered in their work together, and has rightfully gone on to become an all-time classic.

Unbeknownst to fans, 1988’s “Dragons Forever” would prove to be the last “three header” to feature the action legends that are Jackie Chan, Sammo Hung and Yuen Biao. By the time they made Dragons, the three leads had been collaborating and performing together for the best part of 30 years. This is borne out in the incredible timing, rhythm and ingenuity on display every time the three share the screen. This movie captures some astonishing physical action. That’s not to say much of their subsequent individual efforts isn’t incredible, but this was the last time fans got to see the magic of all three stars together.

The 2-disc Blu-ray presentation is spotlessly clean, and comes uncut in the UK for the first time. The packaging features a great booklet full of information, production stills and artwork, with a nice reversible sleeve.

Dragons Forever is available in the UK uncut on Blu ray

Beautifully packaged with a reversible sleeve

Extras include a fascinating interview with Benny Urquidez, in which he discusses seeing Bruce Lee as a youngster, and how that influenced him and his incredible full-contact career. He also gives some interesting insights into his work in the movies with stars such as Jackie Chan.

Hong Kong movie expert Mike Leeder gives a great appraisal of why the trio of Jackie, Sammo and Biao works so well to make “Dragons Forever” a fan favourite.

Stunt Coordinator Jude Poyer describes his experiences working with the Three Dragons on the movies “Knock Off”, “The Medallion” and “A Man Called Hero”. There is a “talking heads” feature with fan boy martial artists and filmmakers describing how the action in “Dragons Forever” influenced them. The great “Double Jeopardy” feature with JC Stunt Team member Brad Allan, and interviews with Joe Eigo, Andy Cheng and Billy Chow from the Hong Kong Legends release many years ago are also included, and always worth revisiting.

My only gripe with the movie itself is that the occasional coarse language, chauvinism, depictions of narcotics, and some of the violence, are at odds with the slapstick and romantic comedy elements. 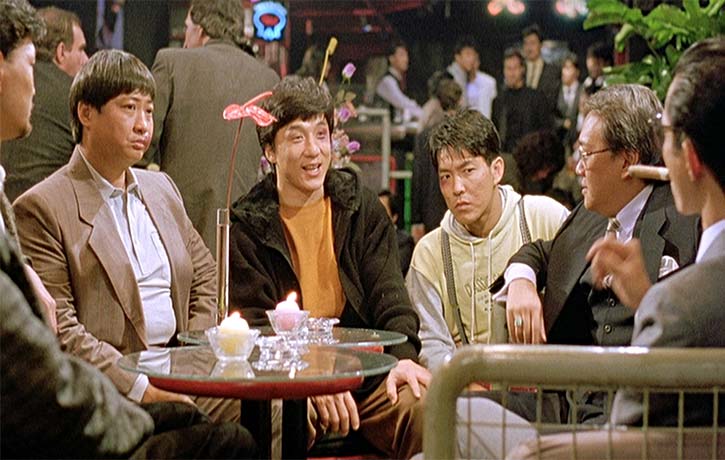 “Dragons Forever” is one of the finest examples of onscreen martial arts action, from three of its finest masters. Although it is a sad thing that they didn’t capture the magic just one more time, we should be grateful that they delivered one hell of a last hurrah for fans. No self-respecting fan of Hong Kong action cinema should be without this movie in their collection!

Jackie puts up his dukes in the end fight

“Dragons Forever” is available on stunning Blu-ray, courtesy of 88 Films, and is released today (16 March) for order via Amazon.

Does “Dragons Forever” from 32 years back still rank among your favourite ever martial arts comedy/action movies? They certainly went all out with this one and it’s been an awesome revisit in 2020!

Stay tuned as we’ve got Blu-rays of “Heart of the Dragon” and “Zu Warriors from the Magic Mountain” coming soon…! So, which restored classic martial arts movies are you enjoying recently? Let us know in the comments below; Like, share and join in the conversation on Facebook and follow us on Twitter & Instagram!

BE A DRAGON FOREVER: ENTER the FUniverse, for news, Top 5’s, Top 10’s, exclusive interview features, turn on your inner dragon with your favourite Official KFK-gear, and subscribe for more old-school new-school, frenzied fight-action on YouTube!