Trailer for Legend of a Fighter

Yasuaki Kurata was always destined to be in films. He went to Nihon University and majored in art, with his main forte being acting. His first breakthrough Hong Kong role was The Angry Guest (1972), a film that launched his image as a formidable on-screen villain. Subsequently, he was put to good effect in films like Four Riders (1972) and Knight Errant (1973) starring Jimmy Wang Yu.

At a time when traditional kung fu films were in decline, Kurata returned to Japan where its popularity was flourishing. He starred in his own TV series, Fight! Dragon (1974). However, he was frustrated when working with other stuntmen who didn’t have the same timing as their Hong Kong counterparts. To solve this problem, Kurata opened his own training school called the ‘Kurata Action Club’ in 1976. The club itself has spawned several well-known Japanese action stars and directors. Most notably, Kurata was the Sensei of Koichi Sakamoto, who would eventually become the leader of The Alpha Stunt Team. Sakamoto has established himself as a top director and fight choreographer with works including Guyver: Dark Hero (1994), Drive (1997) and Broken Path (2008). Action starlet, Yukari Ôshima, was also known to train with some of the team..

Despite his work in Japan, Yasuaki Kurata was still ever present on the Hong Kong action scene and his roles became even more varied. One example was when he played an honourable Ninja warrior in the Shaw Brothers classic, Heroes of the East (1978). Kurata would tackle one of his most poignant roles in Legend of a Fighter (1982), directed by Yuen Woo-Ping. In this film, he plays Chiang Ho-Shan, a teacher to the young Huo Yuan-Jia who will eventually become his enemy. Kurata perfectly plays a man who is conflicted when fighting on behalf of his own country against an opponent who he considers his friend. 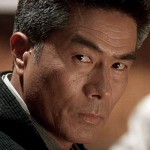 Kurata ready to strike with a traditional katana

Being a ninja is all about deception and invisibility

Yasuaki Kurata preparation is everything

During the mid to late eighties, Kurata worked closely with Sammo Hung. He featured in Twinkle Twinkle Lucky Stars (1985) and Eastern Condors (1987) and even played a rare comedic role in Millionaire’s Express (1986). In the Lucky Stars film, we get to see him show off his mastery of the Sais (a traditional weapon used in the Okinawan martial arts) against Hung’s double tennis rackets.

The role Kurata is probably best known for is Fuimo Funakoshi in Fist of Legend (1994). Similarly, to Legend of a Fighter, he plays a man who is obligated to fight against the Chinese but values human life regardless of nationality. The duel between Kurata and Jet Li not only shows the physical dexterity of the two fighters but also captures a beautiful dialogue regarding the philosophical value of what martial arts represent. The scene is one of many reasons why Fist of Legend is one of the last great kung fu films of the period.

One other notable role that Kurata played was the ‘Master’ in So Close (2002). The film was released when kung fu action was a big popular around the world but the quality was dwindling. So Close was one of the few gems that delivered the action quota and the final showdown between the heroines and Kurata is one of the best in recent years. Despite Yasuaki Kurata’s advanced years, he is still making appearances in big films like Jackie Chan’s Shinjuku Incident (2009) and Legend of the Fist: The Return of Chen Zhen (2010) starring Donnie Yen. Kurata has fought all the on-screen greats, is very experienced in the realm of kung fu cinema and earned his title as a genuine martial arts master. His body of work speaks volumes so his name cements itself as legend in the hearts of martial arts’ and film fans across the globe.

Trailer for Fist of Legend

Kurata shows us a glimpse of the Tiger Claw

Giving Li a hard time with an Aikido style lock

Get straight to the point with a direct punch

Bringing style to the Sai weapons

Bringing on a bit of boxing

Brilliant end fight scene in Legend of a Fighter

Aiming to strike with and at a vital point

In the Blood with Gina Carano