Arriving from a fresh 2K restoration, 88 Films bring Jackie Chan’s directorial debut to glorious Blu-ray with this classic, packed-to-bursting with action kung-fu comedy! OUT NOW from 88 Films and Amazon!

Hot on the heels of his box office smash hits “Snake in the Eagle’s Shadow” and “Drunken Master”, Jackie Chan makes his writing and directing debut, and stars as the young tearaway, “Chan Lung”. Veteran star of the Bruce Lee movies “The Big Boss” and “Fist of Fury“, James Tien co-stars “Chen Peng-fei”, Lung’s grandfather. Yen Shi-kwan stars as the villain “Yen Chuen Wong”. Yen has appeared in over 130 films since the 1950’s, in titles such as “One Armed Swordsman”, “Boxer from Shantung”, “King Boxer”, “Iron Fisted Monk”, “Once Upon a Time in China”, and “Iron Monkey”, to name but a few.

Hong Kong actor and producer Dean Shek plays “The Coffin Seller”. Shek is recognisable from his many appearances in period kung fu films including “Drunken Master”, “Odd Couple”, “Warriors Two”, “Snake in the Eagle’s Shadow” and “Dance of the Drunk Mantis”. He also featured in the John Woo classic “A Better Tomorrow 2”. 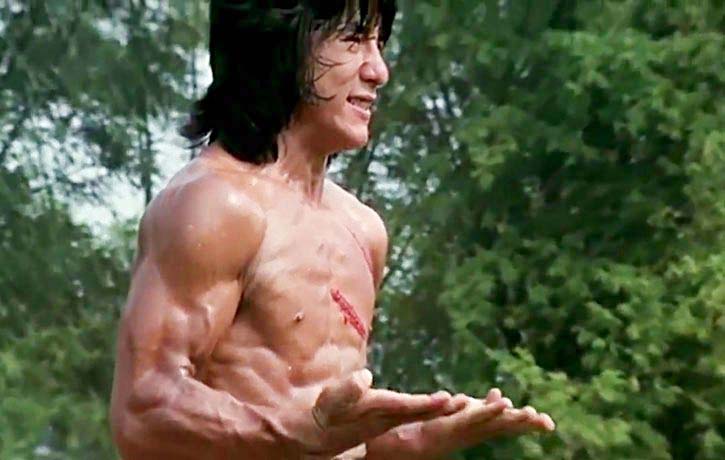 Lung up for a rematch against Yen

A prolific martial arts actor throughout the 1970’s and 80’s, Chen Hui-Lou appears as “Unicorn”. Chen featured in such classics as “The Killer Meteors”, “To Kill with Intrigue”, “Raining in the Mountain” and “World of the Drunken Master”. A versatile character actor who worked in the Hong Kong film industry for five decades, Lee Kwan plays “Tee Cha”. He had supporting roles in the Bruce Lee movies “The Big Boss” and “Fist of Fury“, and played Donnie Yen’s dad in “Drunken Tai Chi”.

Chan Lung is a youngster, living in a remote village with his grandfather, kung fu master Chen Peng-fei. Lung does not take his training seriously enough, gambles, and frequently gets into fights, leading him to use the martial arts skills that his grandfather told him he must keep secret.

Lung briefly works for an unscrupulous undertaker and is fired when he accidentally traps his boss in one of his own coffins. After making his escape, he runs into three thugs that he had previously beaten up earlier. Realising their fighting skills are inferior, they ask Lung to teach them kung fu.

Lung meets their sifu, Tee Cha, the unskilled leader of the Everything Clan. Master Tee offers Lung a lucrative job training his students and fighting against the top fighters from rival schools. This boosts the reputation of the school and of the scheming Master Tee. However, Lung’s reputation comes to the attention of evil kung fu master Yen Chuen Wong, which puts Lung’s grandfather in grave danger. In order to stand any chance of challenging Yen Chuen Wong, Lung must undertake the most rigorous training from the Unicorn!

Lung grieves over his grandpas death

Even if you hurt me Im still laughing

The opening is filmed in quite an old-fashioned and melodramatic way, much like a Shaw Brothers movie. However there are little hints in the choreography of the opening fight, little operatic flips and falls, that indicates the “Jackie Chan flavour” inherent in this production.

The introduction of the main man himself is more familiar territory, with Jackie involved in a comic training scene overseen by veteran star James Tien as his strict grandfather. Comic shenanigans also ensue when Jackie takes on three hapless thugs in the woods.

Jackie is as acrobatic and energetic as he has ever been

Fans of “Drunken Master” & “Snake in the Eagle’s Shadow” will Lap this Up!

A sparring sequence with wooden poles demonstrates that the sophisticated style, timing and long takes of his work with Yuen Woo-ping must have rubbed off on the young Jackie. Fans of “Snake in the Eagle’s Shadow” or “Drunken Master” will lap most of it up, although it is a little more cartoonish in nature than his two preceding classics. The Pink Panther theme even features at one point!

Although it was usually Jackie’s “big brother”, Sammo Hung, who received the plaudits for his weapons play, Chan shows that he is no slouch in a stunning albeit played for laughs, pole and sword duel. It’s not just Jackie Chan that gets to shine, but James Tien and Yen Shi-kwan get to display their screen-fighting skills in a much more serious and brutal battle. 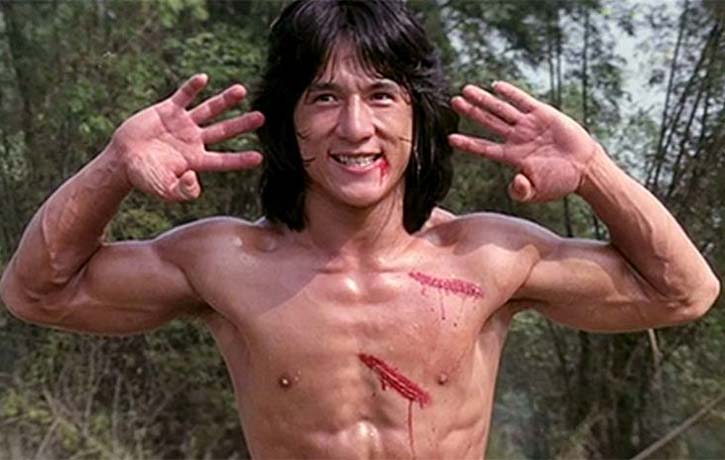 The many faces of Sing Lung

The obligatory training sequence features some physical feats as astonishing as anything seen in his earlier work. Some of the exercises, often performed in slow motion, are eye-watering to watch! The forms that he practices are effectively highly-entertaining ditang (ground tumbling boxing) routines but representing various emotions for comic effect and exposition.

Lung must undertake the most rigorous training from the Unicorn

When Chan fights more seriously it’s nice to witness him using more authentic long fist techniques, rather than movie-manufactured “Snake” or “Drunken Fairy” moves of his previous hits. As we head toward the finale, Jackie is as acrobatic and energetic as he has ever been, as he starts to employ his new “emotional-fu” skills. There are no wires here, just pure physical talent. You can also see the genesis of the speed, last-second timing, and centimetre- perfect ingenuity that would come to dominate Chan’s style of stunts and action throughout his career.

This film is packed to bursting with action sequences. Although it is shot in an old-fashioned style, Jackie’s incredible and pretty unique physical dexterity elevates this film over many of its contemporaries. Scenes can sometimes lurch wildly from cartoonish comedy to vengeance melodrama, but it remains entertaining throughout. 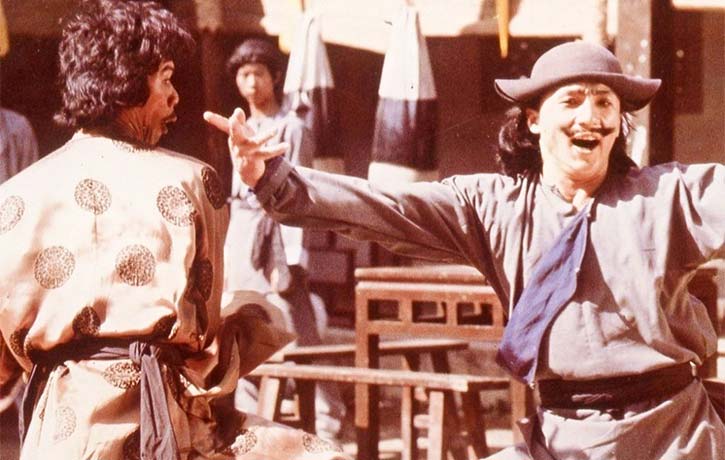 As a piece of film history, “Fearless Hyena” is an important marker in the career of Jackie Chan. It is our first chance to witness the incredible screen action that Chan can produce when he is given creative control. As a directorial debut, you can also see that he learned a lot about the filmmaking process in his formative years as a stuntman, before his superstardom. 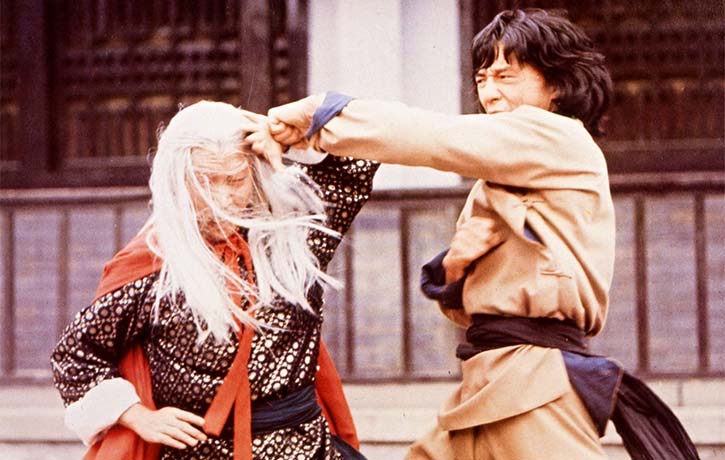 Perhaps lacking a little of the charm and sophistication of “Snake in the Eagle’s Shadow” or “Drunken Master”, this is still a worthy companion piece, and fans of those two masterpieces will love this one too!

“The Fearless Hyena” is OUT NOW on stunning Blu-ray, order your copy from 88 Films and Amazon!

Do you remember Jackie Chan’s directorial debut “The Fearless Hyena” from some 41 years ago? Did this match up to his previous outings in “Snake in the Eagle’s Shadow” or “Drunken Master”? Where does it rank among your favourite all-out, action-packed kung-fu classics? Which other old-school Chan films have you been enjoying recently? Let us know in the comments below; Like, share and join in the conversation on Facebook and follow us on Twitter & Instagram!