Depending on which version you’re watching, Jackie Chan plays “Buck Yuen” (Hong Kong release), or “Jackie Chan” (Western release) a shop salesman who was orphaned as a child.

Former stuntman and popular actor Eric Tsang plays “Many Liu”, who has been tasked with finding Mr Park’s real son and heir. Tsang most recently appeared alongside Jackie Chan in “Skiptrace“. Taiwanese singer, actress and model Vivian Hsu plays “Yong”, who is trapped in the world of narcotics by the wicked Mr Zen.

Popular South Korean television actress Kim Min-jeong stars as “Carmen Wong”, a CIA Agent. Taiwanese actor Wu Hsing-kuo plays the drug lord “Mr Zen”. Wu was trained in classical Peking Opera since the age of 11 at Taiwan’s state-run Fu-Hsing Chinese Opera School. He is known for his performance of complex movie roles as well as for his innovative adaptations of Western classics into traditional Peking Opera.

Eric Tsang is good value as Many Liu

Jackie Chan works as an unassuming exercise equipment salesman in Hong Kong. He appears on the local news after thwarting an armed robbery at the shopping centre he works at, bringing him to the attention of Many Liu. Jackie is an orphan and matches the description of the missing son of a wealthy Korean man, Mr Park Wong Jung, who has employed Many to track down his heir. Jackie travels to Korea to meet the terminally-ill Mr Park, who invites him to play a mysterious game to find his inheritance. Jackie can trust no one as the clues he solves take him to Turkey where he becomes embroiled in a dangerous game of cat-and-mouse involving the CIA and deadly gangsters, who are all after a new super-addictive narcotic.

The film opens quite violently with the machine gunning of some scientists that have developed a new “super opium”. It’s a little at odds with the mostly comic flavour of the rest of the film, although similar to the approach of Jackie’s eighties classic “Armour of God“.

We are quickly taken into familiar Jackie Chan territory with our hero’s introduction. Jackie shows off a few cool tricks on the exercise equipment he is trying to sell, before inadvertently getting caught up in an attempted armed robbery in the shopping centre. For long-term Jackie Chan fans, watching this sequence is like slipping on your favourite comfy coat. He uses a pushchair as a weapon and hurdles over moving escalators before having an innovative, confined fight in an elevator. We expect nothing less. The scene ends with an expensive looking set piece involving a crane smashing through a building.

This is how to sell exercise equipment

The nude chase is hilarious

After jetting off to South Korea, Jackie is soon in action again in an hospital ward where he uses defibrillator paddles as a weapon to hilarious effect against two foes.

It’s not long before Jackie is on his travels again as the clues to his mysterious inheritance take him to exotic Istanbul in Turkey. Surrounded by bad guys, he has a quick fight in and around a taxi cab. Again, everything feels very familiar, the back roll through the car door, using his briefcase as a weapon etc. Jackie Chan is the master of this style of choreography, although we have seen much of it before.

Jackie finally bursts into full innovation mode in an exciting and hilarious chase sequence. The bad guys attack Jackie in a Turkish bath and he has to use everything from bowls of water to soapsuds to fight off his foes. As he makes his way into the streets, Jackie loses his towel and ends up naked! Using just about every market stall item including cloths, spices, crockery and even tambourines, Jackie performs an incredible juggling act to hide his modesty while simultaneously fighting the assailants.

Using defibrillator paddles as a weapon to hilarious effect

Jackie and Yong must make their escape 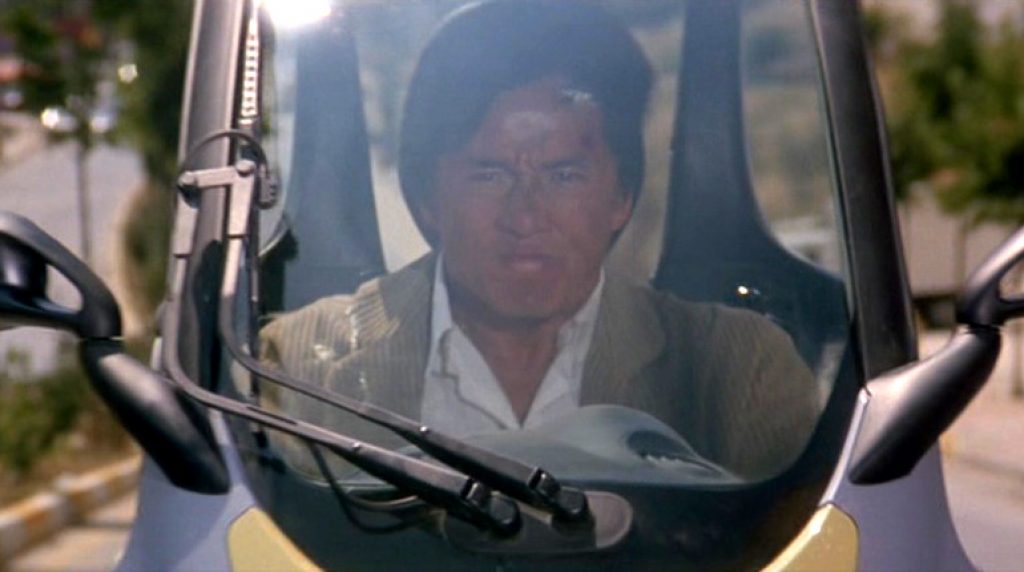 The familiar use of an escalator

Shortly after, Jackie and Vivian Hsu are captured. The action barely pauses for breath as Jackie fights a rampaging swordsman with only his agility and a fishing net for defence. As they make their escape from the machine-gun toting baddies, Jackie wrecks the harbour-front in yet another costly-looking set-piece.

As the film builds to its explosive climax, Jackie fights former JC Stunt Team Leader Brad Allan on the back of a speeding open top Mercedes. Given the location and the nature of their duel, they still manage to perform some pretty nifty fighting moves.

The tension cranks up as Jackie performs all manner of climbing and jumping stunts on a runaway tanker truck. There is a genuine heart-stopping moment as Jackie tries to transfer a young child from the speeding truck to a car. The whole sequence culminates on a bridge with a truly spectacular stunt that wouldn’t look out of place in a James Bond movie.

The end credits feature the regular outtakes showing Jackie taking a few knocks in the name of his art and include a couple of amusing fluffs!

Jackies stunts are as crazy as ever

This film is an odd entry into Jackie Chan’s extensive and impressive filmography. It’s not a terrible movie, but it suffers from a few flaws that prevent it from being up there with the better productions that Jackie Chan has been involved with since the turn of the millennium. The main problems are the daft plot, there is no fully fledged villain and nearly all the action looks just too familiar. It’s not funny enough to be an out-and-out comedy and not thrilling enough to be a pure action film. In many ways, Jackie is the victim of his own success. He has set the bar so high in his previous work that it gets harder with which subsequent film to match or top it.

Having said that, fans of Jackie Chan movies should not write this one off. Jackie’s (as is Eric Tsang’s) acting performance is very good and there is something quite comforting in the familiarity of some of the action scenes. And let’s face it, even a mediocre Jackie Chan stunt sequence is better than most equivalent action films. The “nude chase” in particular is a very funny highlight harking back to the golden days of Jackie Chan’s comedy films. This clip is in fact one of the most popular on our Facebook page with nearly 5 million views and counting!

It’s all very well filmed with high quality production values in some beautiful Turkish locations and certainly in the Dimension/Miramax (Western) edit of the film, there is rarely a long pause between each action sequence.

If you want an uncomplicated fix of Jackie Chan-style action “The Accidental Spy” is one to pop into your DVD player on a rainy day.

Jackie fights Brad Allan on the back of a speeding Mercedes

Some of the stunts are very familiar