“Rigor Mortis” pays homage to the original “Mr Vampire” films by featuring many of the actors from that classic.

Star of the original “Mr Vampire”, Chin Siu-ho plays a sombre and depressed version of himself. Chin Siu-ho’s supporting star from “Mr Vampire”, Anthony Chan, plays Uncle Yau, a veteran Taoist vampire hunter who now runs a glutinous rice stall. Shaw Brothers veteran and star of “My Young Auntie” Kara Hui is Yang Feng, a single mother to an albino boy, with a tragic past.

Regular bad guy in films such as “Yes, Madam” and “The Prodigal Son”, Chung Fat plays Gau, a warlock who dabbles in the dark arts. Chung Fat has experience of the horror genre having appeared in “Dead and the Deadly” and “Encounters of the Spooky Kind” for Sammo Hung. Mainly known in Hong Kong for his television work and supporting appearances in Johnny To’s films, Lo Hoi-pang plays the janitor, Uncle Yin. Comic actor Richard Ng, star of the “My Lucky Stars” and “Pom Pom” series of films, plays it mostly dark and straight as Uncle Tung. Star of “White Hair Devil Lady”, Nina Paw Hee-ching plays Uncle Tung’s wife, Auntie Meiyi and probably best known for playing the Police Captain in “Mr Vampire”, Billy Lau stars as The Cook.

The once-successful actor Chin Siu-ho, star of “Mr Vampire”, becomes depressed and suicidal when his wife leaves him. He moves into the mysterious room 2442 in a dilapidated apartment building, where he meets Uncle Yin, the building’s supervisor. After listening to a recorded message left by his young son, Chin hangs himself. This attracts the spirits of twin ghosts who haunt the apartment, and they possess his body. Uncle Yau, a retired vampire hunter, bursts into the room, cuts down the noose, and exorcises the spirits from Chin’s body.

Chin visits Yau’s restaurant, where Yau explains that he has taken up cooking and serving glutinous rice, an ingredient used in fighting “jiangshi”, or reanimated corpses, as there are no more vampires to fight. Chin thanks Yau for saving his life, but Yau tells him to save his gratitude for a time when he can save Chin’s life without the threat of suicide. Chin also meets several of his neighbours, including Yang Feng, a traumatised woman, Yang’s albino son Pak, and seamstress Auntie Meiyi and her husband Uncle Tung.

In a dream, Tung tells Meiyi that he must leave her for several days and requests that she wait for him. In reality, Tung has fallen down the stairs and died. Black magic practitioner Gau discovers the body and preserves it for Meiyi, who requests that he resurrect Tung. Chin discovers that Yin has been providing shelter for Yang and Pak, and that they are connected to the ghostly twins.

Chin slowly uncovers the horrifying truth and the dark secrets of each of the apartment block’s tenants, entering a nightmarish world to fight ghostly spirits and the jiangshi, culminating in a chilling twist. 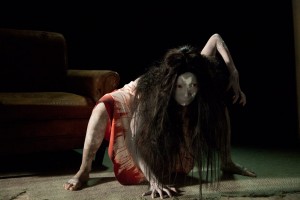 “Rigor Mortis” is first and foremost, an Asian horror movie. Like an incense stick warding off evil spirits, it is slow-burning and atmospheric. Apart from a short burst of CGI enhanced action when Yau first exorcises Chin from the Spirit Twins, it is fifty minutes in before we witness the first major action scene. In a fight between veteran stars Chin Siu-ho and Chung Fat, in spite of the visual effects, we see that they are pretty much as fast and agile as they were in the films this one pays homage to, with high kicks, flips and falls.

The only other big action set piece is the film’s finale. Chin Siu-ho takes on a jiangshi in one of the apartment building corridors. The claustrophobic setting and mix of special effects, physical skills and slow motion, deliver a tense yet inventive battle. The fight climaxes in a corridor of real and CGI wet clay emphasising the big strikes and falls as the clay splatters and sprays in slow motion.

The action and the physical horror scenes in this film do not hold back, and it is not for the squeamish. When the secret of apartment 2442 is finally revealed, it is an especially disturbing and bloody scene.

“Rigor Mortis” pays homage to the Hong Kong classics such as “Mr Vampire” and “Encounters of the Spooky Kind”, mostly in its casting. There are little subtle nods throughout, such as the mention of glutinous rice or some of the rituals the Taoist vampire hunters go through.

However, the classic “hopping vampire” movies of the eighties this is not. This is a full-on, nightmarish, brooding, creepy, tense and disturbing horror film. The comic elements of it’s ancestors are nowhere to be found, and this has much more in common with the popular Japanese horror films such as “Ju-On” (“The Grudge”) or “The Ring”.

I have to be honest and admit, horror isn’t really my thing. I have watched films like “The Ring”, and I understand them, but it’s not the sort of thing I would normally choose to watch. I am a fan of “Mr Vampire” and “Encounters of the Spooky Kind”, but they have a strong vein of humour running throughout them, and of course, the martial arts featured in those films is sublime.

This updated version is shot very stylishly with good use of visual effects. Everyone delivers a solid acting performance, and the creepy tension developed by the lighting, locations and soundtrack is almost palpable. Even though I figured out the twist ending, almost as soon as it was established earlier in the film, it still had an emotional resonance.

It’s great to see Chin Siu-ho. I have always wondered why he was never a bigger star as he is good looking, a good actor and has great physical skills. The background of his character in this film plays on this too. He also doesn’t appear to have aged, so maybe there is something supernatural going on!

I enjoyed seeing Chung Fat performing in a familiar role that he does so well. I have always thought Richard Ng was a fine actor, and he delivers a rare dramatic turn in his role here.

A film such as the comedy “Gallants” has more success paying tribute to the genre and actors it is imitating. There is some nostalgia to be had in watching the original stars in a modern-setting, but if you are a pure martial arts fan, you will probably be more entertained by seeking out one of the old classics.

However, if you are a fan of Asian horror films in particular, this film ticks a lot of the essential boxes, and you can add an extra point to my rating!