It’s not every day that you see a sequel shot back-to-back with its predecessor, such as the case of “Tai Chi Hero”. Having been released just a month after “Tai Chi Zero”, “Tai Chi Hero” picks up from where “Zero” left off, with Jayden Yuan Xiaochao as Yang Lu Chan, who learns and further sharpens his Tai Chi skills this time to emerge from a ‘zero’ to a hero.

To tell some new parts of the story we’ve got some new faces; William Feng Shaofeng as Chen Zaiyang, Yuniang’s estranged older brother who has a connection with Fang Zijing, Nikki Hsieh as Zaiyang’s deaf wife Jin Yuner, Peter Stormare as Fang Zijing’s accomplice Fleming and Yuan Wenkang as Prince Dun. Daniel Wu makes a cameo appearance as Mad Monk, who warned the 10th Grandmaster, played by Patrick Tse, not to teach Tai Chi to outsiders generations ago. Last, but definitely not least is the legendary Yuen Biao making an appearance as Baguazhang master Li Qiankun.

Lu Chan holds his own 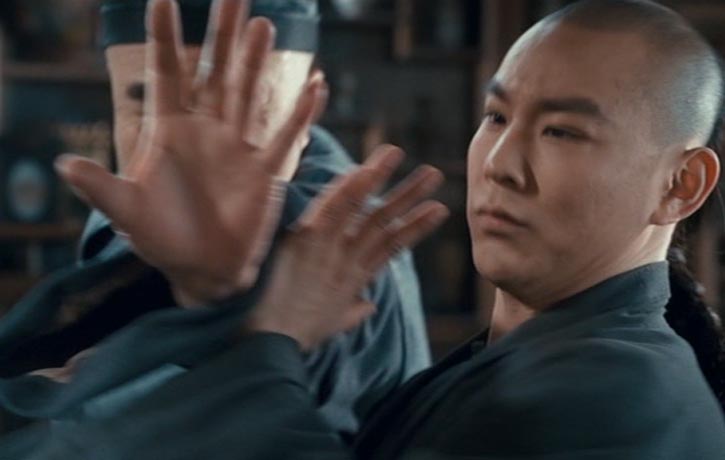 In order to be a part of the Chen family and learn Chen-style Tai Chi, Lu Chan agrees to marry Yuniang. Surprisingly, on the wedding day, grandmaster Chen Chang Xing’s estranged elder son Chen Zaiyang arrives and eventually brings up an old prophecy forbidding Chen-style Tai Chi to be taught to outsiders, causing the Chen villagers to develop hostility towards Lu Chan.

Chang Xing is nevertheless suspicious of Zaiyang’s motives and finds that he has ties with Fang Zijing, who assumes the role of a deputy governor under Prince Dun and seeks to destroy the Chen village. In order to save the village, Chang Xing sends Chen Yuniang and Yang Lu Chan to seek Baguazhang master and Prince Dun’s butler Li Qiankun for help.

“Tai Chi Hero” is overall an improvement over “Tai Chi Zero”. A lot of the fights are brief, but there’s plenty of action, you’re still guaranteed to see some hand-to-hand combat or training scenes once every 10-15 minutes and there are still two major battles and one longer fight.

“Tai Chi Hero” continues to genuinely portray the art of Tai Chi through the fight scenes, much like the first. The Scott Pilgrim-like video game effects are significantly reduced, no real need for them anyway. While the wirework in “Tai Chi Zero” sometimes felt awkward and out-of-place, it is more coordinated and graceful in “Tai Chi Hero” like that in a wuxia film. Sometimes, it even accommodates certain characters’ skills.

In addition, for what may be missing in action in “Tai Chi Hero” is compensated by deeper story elements.“Tai Chi Zero” is like an exterior design, having an overall basic story, while “Tai Chi Hero”serves as the working gears behind the series adding more substance, such as better understanding of the characters, their background and motivations along with character development.

The first act is pretty much a warm-up and it gives the viewers a taste of the combat prowess of newcomers Zaiyang and his wife. Zaiyangis able to defy gravity and move his upper body down and around much better than Neo does when dodging bullets in “The Matrix”. However, by the time Lu Chan fights Zaiyang, it is revealed that much of it is due to a mechanical vest that Zaiyang wears. This nevertheless suggests Zaiyang’s proficiency in engineering which comes in handy once again when Zaiyang uses his plane aka “Heaven’s Wings” to save Yuniang and Lu Chan during the first major battle against Fang Zijing’s army.

Lu Chan is ready for battle

Fang Zijing returns with a vengeance

Considering that Chang Xing, Yuniang and Lu Chan are the only ones protecting the Chen village, it’s nice to see them go unarmed against an entire army equipped with rifles, spears and tanks, collectively a “Triple Threat”! Of course, just like the final showdown in “Tai Chi Zero”, the combat here is somewhat short-lived for an epic three vs hundreds (or thousands) battle, but it’s not the real conclusion.

For the finale, the crew really saved the best for last, not just for the film itself, but also for the series as a whole. Lu Chan and Yuniang seek Baguazhang Master Li Qiankun, and Lu Chan must fight a series of 7 Baguazhang masters in order to get to Master Li.

Bring out the fire

Even the farmers use gung fu

Fang Zijing starts a war with the Chen village

Just like a certain sequence of fights in “Tai Chi Zero”, this sequence in “Hero” is presented like a run through of arcade mode in popular fighting game series’ like “Street Fighter”, “Tekken”, and “Mortal Kombat”. Every fighter Lu Chan goes up against represents a different element, and it is evident in his or her fighting style. For instance, a firefighter dressed in reddish-orange is aggressive and a wind fighter ‘goes with the flow’ using his hand movements. After all is said and done, we finally have Lu Chan against Master Li, played by none other than the legendary (drumroll please…) Yuen Biao!

When you combine an Olympic wushu champion, a kung fu cinema legend and a renowned choreographer, the result is cannot be any less than epic. Lu Chan and Master Li demonstrate soft yet graceful and effective skills, true to the way of internal martial arts while maintaining their balance as they fight on top of kitchen walls.

Go with the Flow

Bring on the thunder

Even though it may feel like that the production of “Tai Chi Hero” came too soon, it’s still an example of a sequel done right. “Tai Chi Zero” is like the appetizer while “Hero” is like the main course, adding appreciable depth to the story arc and presenting a well-orchestrated finale that is no doubt the best fight this Tai Chi series has to offer.