For the plot of this film, two legends of Hong Kong martial arts cinema star in dual roles as Masters and students. Sammo Hung plays the sword master “King of Sabres” and also the younger student of the spear master, “Ah Yo”. As Yang to Sammo’s Ying, Lau Kar Wing stars as the spear master “King of Spears” and the younger student of the King of Sabres, “Stubborn Wing”.

Bryan “Beardy” Leung Kar Yan stars as “Laughing Bandit” AKA “Old Yellow Dog/ Scarface”. A regular star of 1970’s and 80’s kung fu films, Beardy is probably best known for his roles in “Knockabout“, “The Victim”, and “Legend of a Fighter”. He also appeared in Donnie Yen’s “Ip Man 3“.

Veteran stuntman and senior member of both the Jackie Chan and Sammo Hung Stunt Teams, Mars plays a comic character called “Potato”! He appeared in his first film in 1966 at the age of twelve, and has since appeared or performed stunts in dozens of Hong Kong action films. He had prominent roles in his best friend Jackie Chan’s hit films “Project A“, “Project A Part 2“, “Police Story“, “Police Story 2” and “Miracles“. His only lead role was in “Lackey and the Lady Tiger”, which also starred Hwang Jang-lee.

Hong Kong actor and producer Dean Shek plays “Master Rocking/ Playboy”. Shek is recognisable from his many appearances in period kung fu films including “Drunken Master“, “Warriors Two“, “Snake in the Eagle’s Shadow“, and “Dance of the Drunk Mantis”. He also featured in the John Woo classic “A Better Tomorrow 2”.

Sammo Hung as Ah Yo

Another familiar face from classics such as “Fist of Fury“, “The Iron Fisted Monk”, “Snake in the Eagle’s Shadow”, “Knockabout”, “Encounters of the Spooky Kind” and many more, Peter Chan Lung, here plays “Pak Chow / Cloud Sabre”.

Two martial arts masters, the King of Sabres and the King of Spears, meet once a year in a challenge match to see who is the best. However, every year the fights always end in a draw. The two men come to an agreement to each take on a student and teach them their style. When the time is right, both students will fight a challenge match of their own to determine whose style is stronger and who is the better teacher.

The Master passes on his skills to the student

The movie opens with a short summary of the eighteen traditional weapons of kung fu. The “Deadly Sabre” (Chinese broadsword) is declared as the “King of the Short Weapons”, as Lau Kar-wing performs a nice Peking Opera-style sword routine. The spear is similarly pronounced the “King of the Long Weapons”, with an equally impressive demonstration form from Sammo Hung. As the opening credits appear, the pair perform a swift but beautiful Dan Dao Dae Qiang, or Sword versus Spear routine.

The fighting action is initiated with a comic turn between Karl Maka and Peter Chan Lung. They are occasionally doubled, but still acquit themselves well with some fast-moving action. When Sammo, in his older Master’s persona, joins the action, the quality is markedly improved. His speed and accuracy with the sword is nothing short of breathless. Lau Kar-wing’s introduction against real-life martial arts Master Alexander Tse Wing-Ming is equally impressive in a spear versus pudao duel.

The two stars performances have rarely been equalled 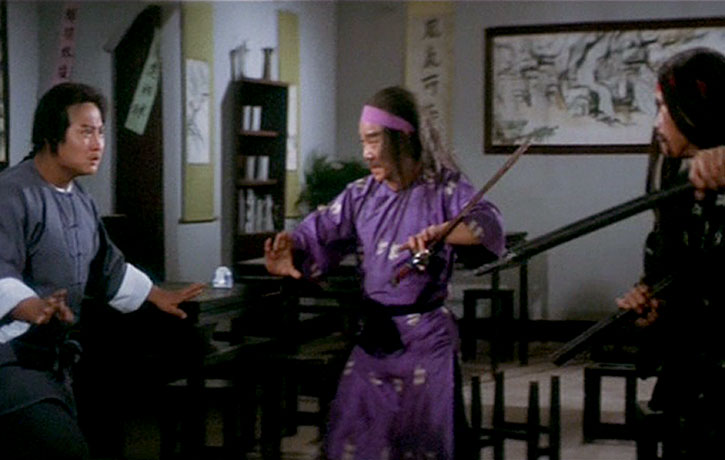 Sammo has an operatic fight 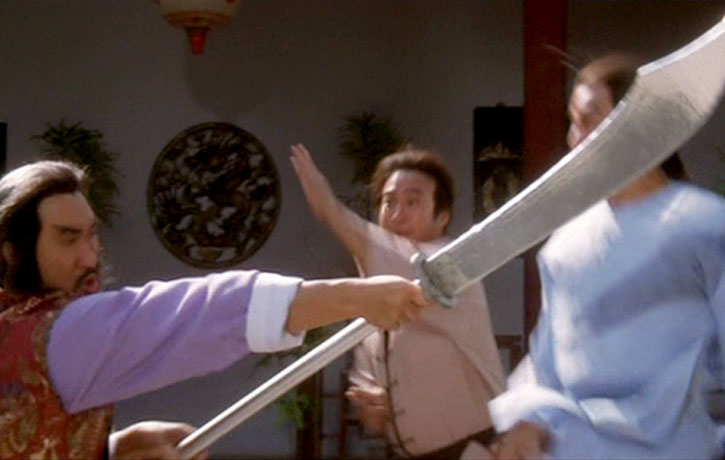 The Guandao is an heavy and potentially unwieldy weapon

When we see the pair of stars meet for the first time in a sword and spear duel, the bar is set extremely high. Students of traditional weapons will recognise the authentic strikes, blocks and spins applicable to each weapon. They are performed with incredible speed and precision, interspersed and linked with flowing Chinese Opera-style acrobatics and juggling.

It’s not long before Lau Kar-wing plays his second role as a younger student. A fight in a marketplace with a group of thugs is more akin to the traditional fisticuffs associated with this sort of scene in this type of film. Although entertaining enough, it lacks the “wow” factor of the preceding weapons duel.

With the “younger” Sammo also recruited, the middle section of the film is packed with the customary “Master teaching the Student” scenes. However, the clever thing about this plot means we constantly get to see Sammo Hung and Lau Kar-wing in their different guises performing some great martial arts techniques, with both of them demonstrating their equal proficiency with a sword or a spear.

The young have a lot to learn from the old

There is some silly humour

There are the usual, requisite brawls in a teahouse and Sammo has a particularly acrobatic scene using a wooden stool. When Beardy arrives looking for vengeance, there is a clever fight employing magnets against the large-bladed Guandao! It all leads to a barnstorming finale featuring some of the best onscreen weapons work of the era. The two stars’ physical performances against each other have rarely been equalled.

Like the British “Carry On” series, this is a film very much of its time. Fans of 1970’s kung fu movies will be especially familiar with the slapstick humour and broad character performances that inhabit so many martial arts films of that era. The scenes filling the time between the fights are mostly unoriginal and very silly, but can raise the occasional chuckle or smile.

Where this film stands out is in the superb performances of the weapons choreography, of which there is a great deal. You certainly get plenty of value-for-money in terms of the number and lengths of the fights. Although the fight scenes have a rhythm familiar to the genre at that time, the pace, flow and long uncut sequences have rarely been as impressive as they are here in similar movies.

The Sword is the King of Short Weapons

The Spear is the King of Long Weapons

This film stands out with superb weapons choreography

The cocktail of Sammo Hung’s fluid-style and Lau Kar-wing’s traditional kung fu complement each other well and they both like to fight with speed and power in their techniques. “Beardy” Bryan Leung Kar-yan also shines not only as the villain of the piece, but also in his use of the Guandao. There aren’t many films where this heavy and potentially unwieldy weapon has been used with such speed, style and grace. In fact, the speed of the techniques in this film made it virtually impossible to get stills that weren’t blurred to accompany this review!