Mrs Sammo Hung, Joyce Mina Godenzi heads up the cast as “Inspector Mina Kao”. The former Miss Hong Kong forged a successful career in action films before marrying Sammo in 1995 and effectively retiring. She is probably best known for her roles alongside her famous husband in the movies “Paper Marriage” and “Eastern Condors“, and also “License to Steal”.

Co-starring is actress and singer Carina Lau as “Huang Chia-Ling”. In a long and varied career, she has starred in films such as “Armour of God“, “Days of Being Wild”, “Project A Part 2“, “Saviour of the Soul”, “The Banquet” and “Ashes of Time“. Carina won a Best Actress Hong Kong Film Award for her role in “Detective Dee and the Mystery of the Phantom Flame“, and also has a famous husband in “The Grandmaster” star Tony Leung Chiu-wai.

Sammo’s opera school brother Yuen Wah stars as the ruthless villain “Yuen Hua”. Wah is famed for his agility and has either appeared in or been a stunt performer in over 180 productions. He famously doubled for Bruce Lee in “Enter the Dragon” and had significant roles as villains in “Eastern Condors”, “The Iceman Cometh” and “Dragons Forever“.

One of Hong Kong’s most popular actors, Tony Leung Ka-fai appears as “Inspector Huang Tsung-Pao”. Leung has had notable roles in “Bodyguards and Assassins“, “New Dragon Gate Inn“, “Ashes of Time”, “Election”, “Rise of the Legend” and “The Myth“.

Hong Kong action legend, Sammo Hung appears as “Superintendent Hung”. Known in the industry as Da Goh Da, “Big Brother Big”, or “Biggest Brother”, from his teens until the present, Sammo has constantly redefined martial arts movie action with his innovation. His vast filmography ranges from “Enter the Dragon”, through to “The Prodigal Son“, “Encounters of the Spooky Kind“, “Wheels on Meals“, “The Bodyguard” and many, many more classics.

Mina Kao is a dedicated and tough cop who marries her fellow officer Huang Tsung-pao, much to the resentment of her new sisters-in-law, who are also in the police force. Having foiled Yuen Hua and his vicious Vietnamese criminal gang, Kao’s team find themselves the focus of Hua’s plans for revenge.

Kao must juggle her family and career whilst putting herself at the centre of danger in a bid to thwart Hua’s ruthless gang. The inevitable intertwining of these threads leads to tragedy and an ultimate showdown of vengeance.

Sammo gets in on the action

Feminine Fists of Fury at the ready

“She Shoots Straight” opens quite calmly with Kao’s and Huang’s wedding, featuring a light-hearted cameo from Sammo Hung as he tries to photograph the newlywed’s happy day.

The action bursts into life during a very 1980’s fashion show. The female cops are like a team of super agile Dirty Harrys, as they dive roll and flip through their shootout with the heavily armed kidnappers. As the action expands out onto the streets, Joyce Godenzi is front and centre. Her face is clearly seen during the explosive automotive stunts. As she clings onto the roof of a van, or rides a motorcycle away from a fiery explosion, there is no doubt it is actually her. Although Godenzi is possibly doubled for some of the hard falls onto the tarmac, she pulls off plenty here that many a stunt performer would be happy to include their showreel.

Action star Yuen Wah enters the fray with a stunt-filled shootout that sets the tone for each subsequent action sequence. Stuntmen fall hard, guns fire, glass shatters etc. etc. Although it is formulaic, the individual physical actions themselves are still hugely impressive.

All ranges of techniques are used

Although the main heroines retain their femininity throughout, they are easily as tough as their male counterparts in the extremely violent action scenes, which also mirrors the actresses’ physical performances.

There is an impressive set piece in the woods involving some elaborate traps, which has Tony Leung, Carina Lau and Joyce Godenzi showing they can perform many of their own high and hard falls, as well as a little fighting action!

When the girls catch up with the bad guys on a ship, they let loose with some impressive hand-to-hand combat. Everything they do is just as swift and hard-hitting as the men in the sequence. Yuen Wah is as agile and dangerous as ever whilst Godenzi particularly impresses, not only with the delivery of her high-kicking combinations, but also in the taking of some brutal looking blows. Carina Lau also shines as she takes on multiple foes with her double machetes. Even Sammo appears for a brief burst of burly action!

The best of the martial arts action is saved for the finalé with a dusty duel between Joyce Godenzi and Agnes Aurelio. The choreography is nothing short of superb featuring all ranges of action, from grapples and throws through to jumping and somersault kicks. The slow-motion filming and dusty setting accentuate the power of every technique. As a fighting finalé it stands up there among the best of its contemporaries such as the Tiger Cage, In the Line of Duty films, or any of the “battling babes” genre that was so popular in the late eighties.

By 1990 there had already been a plethora of successful “Hong Kong cops versus violent gangsters” films. They, more often than not, featured male leads, but there was also a whole sub-genre of “girls with guns”, that included stars such as Michelle Yeoh, Cynthia Rothrock, Cynthia Khan and Moon Lee appearing in classics like “Yes Madam”, “Royal Warriors”, “In the Line of Duty”, “Angel” and “Inspector Wears Skirts”.

“She Shoots Straight” came relatively late to the game, and as a result can sometimes suffer from a little over-familiarity with the format. However, despite some of the cliches and melodramatic dialogue, it does deliver a solid Hong Kong action film with some genuinely touching dramatic moments, not least the scene featuring Matriarch Huang’s birthday party.

Joyce Godenzi carries her leading role with aplomb, being able to switch from ice- cool cop to an emotionally-fragile wife with apparent ease. Yuen Wah doesn’t disappoint either adding yet another chilling and dangerous villain to his repertoire.

Yuen Wah is chilling as the villain

Cops Huang and Kao start a new life together

Godenzi takes the shots as well as giving them

Godenzi goes from ice cool to emotionally fragile with ease

She Shoots Straight aka Lethal Lady 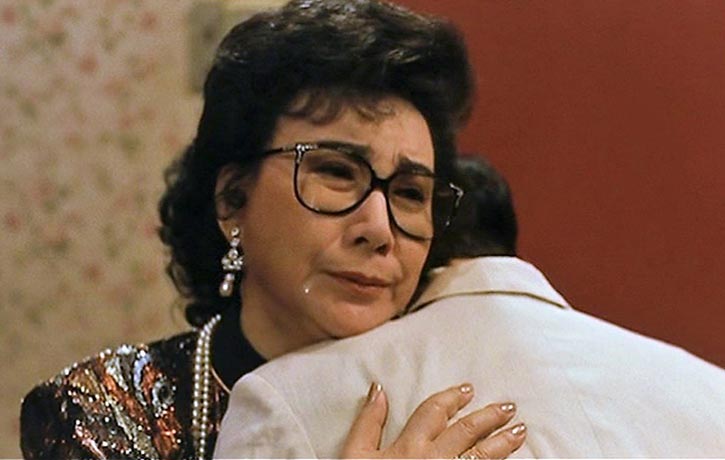 There are some genuinely tender moments

Other films in the genre probably contain more martial arts fights, whereas here, there seems to be more emphasis on stunts and gunplay. Having said that, when the hand-to-hand combat does kick off, it is of the highest quality. Overall, “She Shoots Straight” is a classic of the genre that will delight fans of eighties Hong Kong stunts and action, definitely worth watching or revisiting!

Fan of 80’s martial arts action? Comment below on the titles you particularly enjoy, join in the conversation on Facebook, follow us on Twitter and feel free to check out more KFK movie reviews!