Ip Man 3 show-stealer Max Zhang Jin and popular Hong Kong star Shawn Yue learn that all that glitters is not gold in this storm force action thriller, directed by Jonathan Li. KFK had the privilege of attending the UK premiere with Hong Kong actor and producer Gordon Lam Ka Tung, who co-stars in “The Brink” in attendance.

Heading up the cast is Max Zhang Jin as the unconventional, tough detective “Cheng Sai Gau”. Zhang’s star has risen with scene-stealing roles in the films “The Grandmaster“, “Rise of the Legend“, “Ip Man 3” and “SPL 2: A Time for Consequences“. His performance in Ip Man 3 was so popular that a spin-off movie focusing on his character of “Cheung Tin-chi” is currently in production, co-starring Tony Jaa and directed by Yuen Woo-ping. 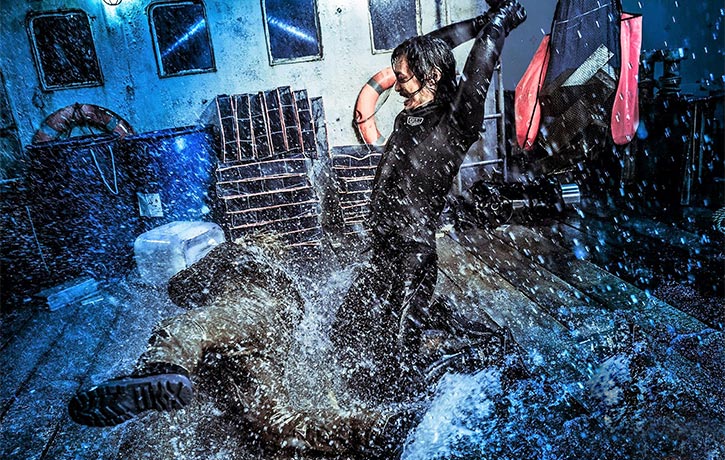 As the typhoon intensifies so does the fighting

Cheng doesnt see eye to eye with his superiors

Appearing as “Kui”, an apparently untouchable gang boss, is action veteran Yasuaki Kurata. He is no stranger to fans of martial arts action having featured in some of the best ever onscreen dust-ups, with roles in “Legend of a Fighter”, “Twinkle Twinkle Lucky Stars“, “Millionaires Express“, “Eastern Condors” and “Fist of Legend“, to name but a few.

The movie is predominantly set in a “man’s world” although actress and model Janice Man (playing Jiang’s girlfriend) joins Cecilia So (as Cheng’s adopted daughter), as characters with no names! Janice Man has played leading roles in several Mainland Chinese and Hong Kong movies and TV series’, including “The Graduation Song”, “The Legend of Zu”, “Helios”, “Cold War 2”, “Nightfall” and “The Midnight After”.

As a typhoon is about to hit Hong Kong, an uncompromising and sometimes reckless cop, Cheng Sai Gau is in pursuit of a gang of ruthless gold smugglers who operate out of the famous harbours, using fishing boats as cover.

However, there is an internal power struggle within the gang of modern-day pirates as the ambitious Jiang Gui Cheng goes on the warpath to seize power from the big boss, Kui. Cheng’s and Jiang’s individual quests and loyalties set them on an explosive collision course as powerful as the impending typhoon.

The sound design makes you feel every blow

Behind the Scenes director Jonathan Li with Shawn Yue

Cheng does not want to compromise

Jiang is about to be double crossed

The opening frames kick off in a style that matches its location; harsh and gritty. There is some stylish slow-motion filming in between the frantic edits, but this is hard-hitting, grounded fight choreography.

With the tone set, Detective Cheng (Max Zhang Jin replete with some startling bleached blonde hair!) and his team, intercept a gang of machete wielding thugs. Using their telescopic batons and nightlights, several gripping weapons duels ensue. Appropriately enough for a man of the sea, Shawn Yue’s weapon of choice as the cold Jiang is a small but deadly handheld harpoon.

Jiang’s girlfriend is literally a bombshell with a penchant for littering public places with exploding water bottles. It allows Gordon Lam a chance to get out from behind his desk and in on the action, which he handles with aplomb.

Not all that glitters is gold

Behind the Scenes Zhang Jin doing his own scuba work

Jiang makes a play for power

When Cheng’s partner is captured by Jiang, he is used as a bargaining chip. It sets up a great hand-to-hand fight sequence in a car park with Zhang again demonstrating why he is among Hong Kong’s current crop of top action stars. It’s not especially showy choreography, but thanks to some superb sound design, the audience feels every kick to the shin or brutal boot to the head.

Following an underwater sequence to rival a James Bond film, as the typhoon intensifies, so does the fighting. The final two-on-one battle takes place on the deck of a fishing boat that wouldn’t look out of place in the Hollywood blockbuster “The Perfect Storm”. With the typhoon at its most ferocious, so are Zhang and Yue as they fight for different causes over a huge golden haul.

Max Zhang Jin’s star has continued to shine brighter and brighter as a result of his exemplary supporting roles alongside such noted Asian movie legends as Donnie Yen, Tony Leung, Jacky Wu Jing, Louis Koo, Simon Yam, Tony Jaa, and more. A headlining role has been in the offing for some time now, and “The Brink” marks an interesting start to his newfound leading man status.

As with his previous performances, Zhang demonstrates he has the requisite acting and action chops. He is more than ably supported by Shawn Yue who here gets to carve his own path without the usual distraction of similar pop singer/model/actors, such as Nicholas Tse et al, co-starring alongside him. He is by no means a “pretty boy” in this film, and he delivers an appropriately hard-edged performance. There is a nice cameo from Yasuaki Kurata, but he sadly doesn’t indulge in any fisticuffs! Gordon Lam delivers the goods as Cheng’s superior and there is solid support from Janice Man as Jiang’s malevolent girlfriend.

KFK attends the UK premiere of The Brink

The film has a gritty, grimy look and feel throughout. This isn’t the touristy or neon-lit city of Hong Kong that we have seen in other crime thrillers, but the working-class underbelly of grubby apartments, rain-swept fishing trawlers and busy fish markets. As is common in Asian action films, the dramatic scenes and dialogue occasionally meander into cliché, but are well performed by the cast. For a directorial debut it is all beautifully lit and shot and aside from some choppy editing, looks stylish throughout.

While it may not be quite up there with the likes of the original SPL/Kill Zone or Infernal Affairs, all concerned give good accounts of themselves. There is enough action to carry the viewer through a sprightly 100-minute running time and I for one look forward to seeing Max Zhang and Shawn Yue back in action in whichever projects they choose next! Love Hong Kong action movies? Tell us about it, join in the conversation on Facebook and follow us on Twitter for some riveting exclusives coming up…!