It may seem odd at this point in his career and his recent Lifetime Achievement Oscar, to complain that there’s anything Jackie Chan isn’t getting enough credit for, but it’s time to declare that nobody today can pull off a buddy comedy as well as he can.

Pair Jackie with anyone from Nicolas Cage to Gilbert Gottfried and you can rest assured that you’re going to get your action-comedy money’s worth. How fitting, then, that Jackie’s newest partner should be Johnny Knoxville, whose work on the aptly titled “Jackass” franchise has probably sent him on nearly as many emergency room visits as Jackie himself!

The one and only Jackie Chan steps into his umpteenth Hong Kong cop role as Bennie Chan, who’s determined to apprehend the murderer of his partner Yung, played by Eric Tsang. Bennie finds an unlikely ally in his quest in the form of American con artist Connor Watts, played by Johnny Knoxville, whose activities end up endangering Yung’s daughter Samantha, played by Fan Bingbing, and Winston Chao plays the object of Bennie’s pursuit, the corrupt businessman Victor Wong.

Michael Wong plays Bennie’s stern Captain on the Hong Kong police force, Tang, but while his bureaucratic oversight frequently gets in their way, he isn’t nearly as big a headache as their main nemesis, the nimble Russian assassin Dasha, played by Eve Torres.

Dedicated Hong Kong cop Bennie Chan has spent nearly a decade hotly pursuing a mysterious crime boss known as “The Matador”, whom he believes to be responsible for the murder of his partner, Yung. Bennie’s prime suspect for The Matador’s identity is shady businessman Victor Wong and he believes he can put a stop to Wong’s activities and identify him as The Matador when American con artist Connor Watts witnesses a murder in one of Wong’s nightclubs in Macau.

Hitting below the belt

Dasha the terminator wants Connor back in Russia

Unfortunately, Connor has some unfinished business with the Russian mob, as well and the unlikely duo must trek from Russia back to Hong Kong with seemingly every mobster and assassin for a thousand miles in hot pursuit.

I know it probably gets old to continuously commend Jackie Chan for continuing to do his thing this well in his 60’s and after breaking every bone in his body a dozen times each over the course of his career, but…. well, no, it really doesn’t! However, that doesn’t mean that he isn’t showing signs of dialling back how much he’s willing to cheat death at this stage of his life and pairing him with Johnny Knoxville right now as opposed to fifteen years ago, is somewhat counter-intuitive.

While “Jackass” is infinitely more crude and juvenile than anything Jackie has ever done (and even that’s probably putting it mildly!) the franchise has seen Knoxville do everything from allowing police riot bullets to be fired at him to strapping himself to a rocket. Pairing him with a fellow stunt maestro like Jackie is such a no-brainer that one must wonder why it’s only happening now. Nevertheless, no one currently can do buddy comedies as well as Jackie can and his partnership with Knoxville is somewhat akin to what “Shanghai Noon” might have looked like if Roy O’Bannon hadn’t been born for another century and a half.

Bennie knows Connor is key to stopping The Matador

Bennie brings matryoshka to his defence 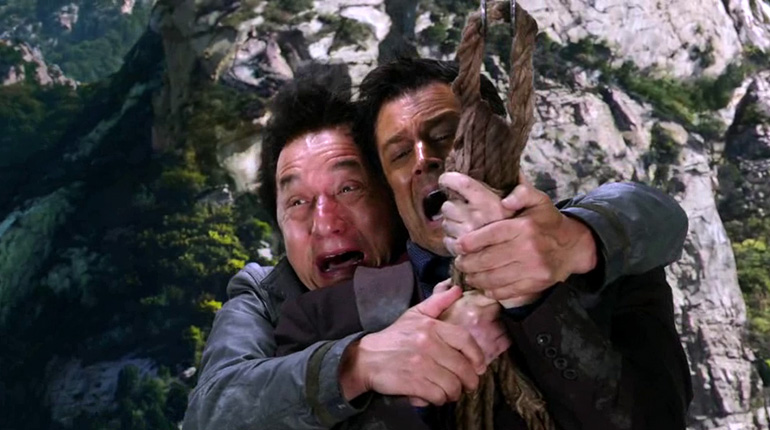 Bennie and Connor zipline their way to Hong Kong

Connor brings his finger to a gun fight

While not quite as intense and big-scaled as “Dragon Blade“, Jackie’s still on his A-game in “Skiptrace”. Jackie makes something of a return to his usual underdog-in-over-his-head role, and it’s a little surprising to think just how long it’s been since he truly dipped his toes in those waters, probably not since “The Spy Next Door” or even arguably “Rush Hour 3”.

Sure, the odds weren’t in his favour in “Police Story 2013“, but that was hardly a comedy.

Here, Jackie’s back to his old routine from the first set piece in a riverside shanty town that he and he adversaries manage to completely topple over like a little house of cards. It’s really during Bennie’s attempt to rescue Connor from his pursuers in the Russian mob that it becomes clear just how long it’s been since Jackie has done his normal routine and what a welcome return it really is.

Eve Torres really gives him a run for his money in the role of Dasha, forcing Jackie to fend off her assaults with everything from Russian matryoshka dolls to saran wrap. Yes, Jackie Chan finds a way to use saran wrap as a tool of self-defence – but of course, only he could!

Bennie gets thrown down by his giant opponent

Bennie traps his opponent with a scissor leg lock

Bennie retrains two adversaries at once

Our heroes’ trek into the Gobi Desert also brings them into conflict with a Mongolian wrestling champ, played by the hulking giant Jiang Baocheng who tosses Bennie around like a ragdoll until an impromptu peace is brokered.

The film maintains this same light-hearted attitude right up to the very end, when Bennie and Connor face off against The Matador’s henchmen on a boat in Hong Kong harbour, Jackie constantly overwhelmed and improvising his way out of danger, just the way he and his legions of fans like it!

“Skiptrace” won’t go down in history as one of the Jackie Chan movies that set a new standard for blending action, comedy, kung fu, and death-defying stunt work, but it is a very enjoyable, engaging buddy comedy and a welcome return to Jackie’s stock and trade of the ‘unlikely hero who makes his strategy up as he goes’.

The way he and Johnny Knoxville riff off each other just solidifies Jackie’s command of the buddy comedy and while it may sound a little sadistic to praise the amount of times Jackie winces from being hit in the crotch as a return to the comedic shtick that made him a legend, well, no one makes human pain as funny as Jackie Chan!

Bennie gives his attacker the axe