This film must have one of the largest cast lists of Hong Kong martial arts stars, if not the largest!

Leading man is Sammo Hung as “Ching Fong-tin”. Sammo is the “Big Brother” of Jackie Chan, having trained at the same Chinese Opera School as children, and is also considered the “Big Brother” of the Hong Kong martial arts action industry. In the nineteen-seventies, Sammo’s fluid choreography in films such as “Warriors Two“, “The Prodigal Son” and “Knockabout“, led to an evolution in Hong Kong movie fighting styles. By the eighties, Sammo’s fame and reputation had grown, and he showed he could adapt to any genre be it fantasy, contemporary, comedy or drama. He even invented a new one, Kung Fu Horror, with “Encounters of the Spooky Kind”. Often casting his fellow students from Yu Jim Yuen’s Opera School, the respect for Sammo’s work allowed him to also cast some of the most popular stars in Hong Kong for “Millionaire’s Express”.

Supporting Sammo is his long-time collaborator Yuen Biao as “Tsao Cheuk Kin”, the Town Fire Chief. In the trinity of Sammo Hung, Jackie Chan and Yuen Biao, Biao is probably considered the most acrobatic, often combining those talents with some incredible kicking skills. Renowned stuntman and a regular in Sammo’s productions, Chin Ka-lok plays one of Yuen Biao’s firefighters.

Yuen Biao is lithe and acrobatic

Three stuntmen performed this fall together

Western stars Cynthia Rothrock and Richard Norton, who made it big in Hong Kong action films, play a pair from the gang of bandits. Regular bad guy in films such as “Yes, Madam” and “The Prodigal Son”, Chung Fat also plays a bandit. Chung Fat rose to prominence in Sammo’s horror films “Dead and the Deadly” and “Encounters of the Spooky Kind”. They are joined by frequent Sammo Hung supporting players and stars in their own right, Lam Ching-Ying (Mr Vampire), Yuen Wah (Eastern Condors), Wu Ma (Encounters of the Spooky Kind), Eric Tsang (My Lucky Stars), Lau Kar-wing (Odd Couple), Dick Wei (Project A), James Tien (Fist of Fury) and Hsiao Ho (My Young Auntie).

And if that wasn’t enough for Hong Kong movie fans, there are also cameo appearances from Bolo Yeung and his old boss from “Enter the Dragon“, Shih Kien, and the “One Armed Swordsman” himself, Jimmy Wang Yu!

This train station scene was actually filmed in Thailand

These kids have impressive skills

The stunt team have some great gags

The One Armed Swordsman Jimmy Wang Yu has a cameo

The maiden voyage of the Millionaires Express

Ching Fong-tin tries to make amends for his past by attempting to return prosperity to his home town. After refurbishing the town hotel, Chin plans to sabotage the maiden voyage of a luxury express train full of wealthy passengers on their way to Shanghai. Stuck in his town they will have nowhere else to spend their money but on the local amenities! Camped just outside the town are a large group of ruthless bandits hoping to profit from the train full of wealthy passengers. They also aim to steal a priceless scroll in the possession of three Japanese samurai who are on board the express. Meanwhile, a gang of thieves try to rob the local bank, but are thwarted by the local fire chief.

As the various factions converge on the town, the scene is set for one of the most action-packed showdowns to feature in a Hong Kong feature film!

For this film, Sammo went for a Western-genre feel, but instead of cowboys quick-drawing their pistols at high noon, we have some of the cream of the Hong Kong stunt industry high-kicking and flipping like only they know how!

In a rather odd opening scene, we find Sammo in snowy Russia stealing valuables from apparently deceased Russian soldiers. The soldiers were just pretending, and they take Sammo back to their lodge, where they dress him in a bra and a mop-head for a wig! It gives Sammo a brief chance to demonstrate that despite his burly size, he can still make an acrobatic escape. Cantopop singer Kenny Bee catches Sammo, leading to a Looney Tunes cartoon-like struggle in the snow, with Sammo in just his boxer shorts!

The fights are well framed and edited

The comic performances of Lydia Shum and Richard Ng are flawless

The action is always athletic

Taking the full force of Sammos back kick

After a brief introduction to the bandits and gangsters, Yuen Biao and his team of firefighters, played by some of Hong Kong’s best-known stuntmen, rescue the occupants of a burning building. In this scene, Yuen Biao makes one of the most remarkable high-falls you will see, as he performs a gymnastic Barani from the roof of a burning two-storey building, landing on the ground below, and running straight into his next piece of dialogue, all in one take.

For a film packed with adult talent, it is a pair of children that deliver the next action scene. Playing the children of Shih Kien and Jimmy Wang Yu, they fight very impressively in the style of the old “Wong Fei-hong” movies, the joke being that Shih Kien starred in those films as the opponent to Kwan Tak-hing’s “Wong Fei-hong”.

A highlight of this movie is seeing Yuen Biao and Sammo Hung fight each other at a deserted railway station. They have some of the best timing in the business and work all the ranges with powerful punches, kicks, grapples and throws. This scene is a genuine treat for fans.

En route to the big showdown, the film is littered with some short but entertaining stunt and comic sequences, reminiscent of the silent movies of Buster Keaton and Charlie Chaplin, and early Yakima Canutt Westerns. There are even nods to “A Fistful of Dollars” and “The Wild Bunch”, as Sammo and Kenny Bee ride through the town firing a Gatling gun.

Superkicker Hwang Jang lee could have been used more

Some scenes are reminiscent of the silent movie era

Sammo gets a good kicking from Cynthia

Sammo ends up in drag

Richard Norton and Cynthia Rothrock paired for the first time

As each gang congregates in the town, the gloves come off for one of the most action packed finales you will ever see. Each star has their own fight sequence to shine in. Yuen Biao is lithe and acrobatic, flipping and leaping off balconies and staircases, whilst throwing lightening-quick spinning kicks, in his fight with Taekwondo specialist Dick Wei. Sammo rampages through multiple foes using two sticks, with every blow looking like it could break bones. Richard Norton has a great fight with Yasuaki Kurata, as Yukari Oshima takes on a sword-wielding mob. Sammo makes his way into the hotel lobby to face Cynthia Rothrock, who is as tough as any of her male counterparts. The editing and use of wide-framing make Cynthia look as good as ever, as she gives Sammo a good kicking! Hwang Jang-lee, renowned for his astonishing kicking skills, has a couple of all-too-brief segments to display them, but what he does deliver is top-notch, especially against Sammo and Yuen Biao.

“Millionaires Express” is one of the most unique and diverse Hong Kong films you will ever see. Primarily a comedy, it is similar in format to the ensemble films of the sixties, such as “Monte Carlo or Bust” or “A Funny Thing Happened on the Way to the Forum”. Remarkably, it still manages to successfully include action, adventure and even a little drama and romance.

The comic scenes with Richard Ng and Lydia Shum always make me laugh, and their performances are spot on. The silent movie type gags, mostly involving Eric Tsang, are also very well done. There are a few misfires with the broad Chinese humour, which can be a little sexist, although the women in the film do occasionally get the upper hand over the men, and a couple of scenes are just ridiculously silly and goofy.

Filming fights can be back breaking work

Where the film really scores is in the action. There is so much talent in this film, and Sammo Hung and his team really know how to make each individual shine in their own light. Every fight sequence is well-filmed, fast and athletic. The fight between Dick Wei and Yuen Biao is one of the best they have ever been involved in. Cynthia Rothrock and Richard Norton also acquit themselves admirably in their roles.

The only disappointing thing with the action scenes is that with so many stars, you only wish you could see more of them. Hwang Jang-lee fighting Sammo Hung and Yuen Biao is over in seconds, and I felt Yasuaki Kurata was also a little short-changed. Stars such as Yuen Wah, Lam Ching-ying etc. have even less to do!

But perhaps I am being too greedy, because on the whole, this is a fun film with some of the most breathless fights Sammo has ever packed into a single movie. And in terms of value for the amount of martial arts stars in one film, you won’t find better than this one!

Dont mess with this lady

Cynthia Rothrock is just as tough as her male counterparts 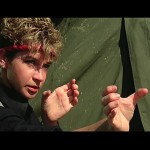 A tribute to the black white Wong Fei Hung films 2 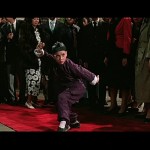 A tribute to the black white Wong Fei Hung films 1