In case you’re not aware, here’s a cool tribute video to Richard Norton to give you an idea of who he is:

Richard Norton’s close friendship with Chuck Norris led to his first film role in The Octagon (1980), in which Norris was the star. The production needed an actor who could portray the main villain as well as handle Okinawan-style weaponry; with Norton’s experience in Japanese martial arts, he stepped up for the part. This was followed by another role in Forced Vengeance (1982), also starring Chuck Norris and Norton eventually graduated to a leading man in Force: Five (1981).

Twinkle Twinkle Lucky Stars (1985) would be Norton’s first Hong Kong role in which he played one of the three main assassins. One of the film’s highlights was his fight with Sammo Hung, which also debuts his memorable catchphrase, “Painful?” Norton earned Chan and Hung’s respect and admiration due to his work ethic and ability to adapt to Hong Kong fight choreography. This eventually led to more roles in films like Millionaire’s Express (1986) and Magic Crystal (1986). In the former, Norton gets to reprise his famous catchphrase while going toe-to-toe with Yasuaki Kurata. Magic Crystal, gave Norton a chance to show off his Karate skills and mastery with the Japanese Sais against Cynthia Rothrock’s more traditional Chinese style of martial arts.

You gotta to be hurting now

Ready for a takedown

Norton showing off his little friend in Raiders of the Sun

A bit of wing chun thrown in the mix

Norton returned to America where he made a number of action B-movies. Notable ones include Fight To Win (1987), China O’Brien 1 and 2 (1990) and a made-for-TV film, Kung Fu: The Legend Continues (1992). However, he did return to Hong Kong to play the menacing but humorous villain, Col. MacDonald in City Hunter (1993) opposite Jackie Chan. The final fight between the two is another great JC style sequence that effortlessly combines hand-to-hand combat, weaponry and physical comedy. Norton would work with Chan again and play a similar type of villain in Mr Nice Guy (1997) with Sammo Hung directing. The film’s unique climax has Chan fighting Norton’s villain while having his hands and legs completely bound – “Don‘t mind the ropes, take your best shot!”

Norton continues to work on films and has appeared in Redemption (2002) with Don ‘The Dragon’ Wilson’ and Road House 2: Last Call (2006). He is also a stunt coordinator and fight choreographer for films like Stealth (2005) and The Condemned (2007). Most recently, he worked on Mad Max: Fury Road (2014), serving as co-fight coordinator and stunt performer. In addition to films, Norton gives seminars that not only utilise his strong martial arts background, but also his experience in security and as a bodyguard.

Richard Norton is recognised more for his work in Hong Kong, where he was generally cast as a typical Western bad guy. However, with an abundant amount of charm, acting talent and flawless screen-fighting ability, he was able to elevate himself beyond the standard ‘Gweilo’ villains into one of the most memorable faces of Hong Kong action cinema. 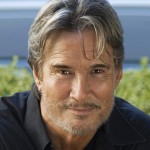 Richard Norton with Benny The Jet

Norton Master of the Sais

Now for a little kali…

Giving the God of Gamblers a run for his money

Mr. Richard Norton talks about “Being a Black Belt” and dealing with “Fear”