On the heels of his star-making appearance in “The Big Boss”, the legendary Bruce Lee solidified himself as the undisputed king of kung fu with “Fist of Fury”. Portraying the role of Chen Zhen, a fictionalized student of Jing Wu Men founder, Hou Yuanjia. The film marked the second time Lee had assumed leading man duties, and when it was released in 1972, it took no prisoners. The combination of an emotionally charged story of Chinese oppression, blazing fight choreography that put most martial arts films of the time to shame, and Lee’s incomparable charisma, “Fist of Fury” became an overnight classic and, with very good reason, -it’s widely regarded to this day as Bruce Lee’s finest film offering.

In the leading role of Chen Zhen is the one and only Bruce Lee. As would be the case with anything he would appear in, Bruce breathed life into the film that was all his own. However, he was arguably never more of a powerful presence on screen than in “Fist of Fury”. Just the way Bruce carried himself on screen was enough to communicate his unique screen persona, but when the fighting begins, he transforms into a beast that cannot be contained or controlled. Nora Miao portrays Chen’s love interest Yuan Li-er, marking her second appearance alongside Bruce after “The Big Boss”. Meanwhile, Riki Hashimoto assumes the villainous role of the nefarious Japanese master, Suzuki, while Robert Baker embodies his right-hand man as Russian fighter Petrov, and each provides a powerful foil for Bruce to overcome.

Martial arts master Chen Zhen returns to Shanghai’s Jing Wu Men academy just as his beloved mentor Huo Yuanjia is being buried after inexplicably dying from a mysterious illness. Literally adding insult to injury, the local Japanese dojo arrives at Jing Wu to taunt and mock Yuanjia’s grieving students, presenting them with a banner proclaiming the Chinese to be the “Sick Men of Asia”. The enraged Chen subsequently arrives at the Japanese dojo. After defeating the entire school single-handedly, he forces the students to quite literally eat their own words when he stuffs the crumpled banner down their throats, departing with the warning, “This time you’re eating paper; the next time, it’s gonna be GLASS!” The school’s headmaster, Suzuki, orders retaliation on Jing Wu, and after the Japanese students ransack the school, orders them to hand over Chen. Realizing that Chen stands no chance with the local authorities on the side of the Japanese, the students of Jing Wu concoct a plan for his escape from Shanghai. Before it can be implemented, however, Chen discovers that the Yuanjia was poisoned by the school’s cook, who is actually a Japanese spy. Chen kills the cook and his associate, and embarks on a quest to make his mentor’s killers within the Japanese school pay for their crimes.

This time its paper next time itll be glass

The many arms of Bruce Lee 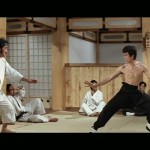 Sizing up the challenge

Side kick with authority

“Fist of Fury” is, without a doubt, Bruce Lee’s most potent and powerful cinematic accomplishment, surpassing even “Enter the Dragon” for the distinction of his best film. Had he been allowed to cut loose on “The Green Hornet” to the extent that he does in “Fist of Fury”, no amount of anti-Asian prejudice could have stopped him from penetrating Hollywood. Under the direction of Han Ying-Chieh, who handled both bad guy and fight choreographer parts on “The Big Boss”, the action erupts onscreen in a way never seen before in Hong Kong films. The fight choreography becomes even more impactful due to the highly emotional nature of the film’s central conflict. The Chinese people had long-endured oppressive foreign occupation and had been continually marginalized at the time of the film’s release. To see a hero like Bruce Lee emerge who could oppose what the Chinese had endured and become a symbol of national pride and strength would make “Fist of Fury” an unforgettable movie going experience that Chinese audiences had simply never seen before, and would elevate the film and it’s star to almost mythical status.

Just about every one of the film’s individual fights are classics of martial arts cinema that continue to stand the test of time. However, the first one that springs to most fans’ minds is Bruce’s single-handed trouncing of the Japanese dojo, and rightly so. Bruce would set the standard for any fight sequence involving multiple opponents for decades to come, and introduced his trademark weapon, the nunchuku, to audiences worldwide. His handling of the weapon was flawless, and popularized the nunchuku to such an extent so as to see the weapon outlawed in numerous countries. As timeless as the Japanese dojo was and is, the emotional power of the combat in the film intensifies from there. Refused entry to a park for being Chinese, Bruce is offered the opportunity to enter by a Japanese man if he pretends to be a dog, and his retaliation for the insult couldn’t be more satisfying for the viewer. By the end of the film, Bruce has become a force of nature, fueled by the insults and cruelty he has endured throughout the film and the knowledge of his sifu’s murder. The final showdown with Suzuki and Petrov in the Japanese dojo stands among the most memorable and powerful ever committed to celluloid, and further cements “Fist of Fury” as the crème de la crème, and best of the best martial arts classics bar none…

Lets get ready to rumble 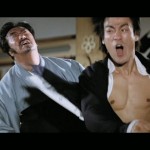 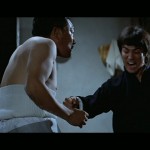 Back off or bring it on

In any genre, films run the full spectrum of quality – from terrible to mediocre, from good to fantastic. But only a few have achieved the distinction of being truly groundbreaking and worthy of historical note. “Fist of Fury” is unquestionably one of these prime examples. With an emotionally-gripping story, electrifying martial arts action, and Bruce Lee’s dynamic, larger-than-life charisma combined with tremendous physical prowess, “Fist of Fury” is a specimen of near perfection. His previous film, “The Big Boss” may have made Bruce Lee a star, but “Fist of Fury” was the film that made him an icon for the ages…