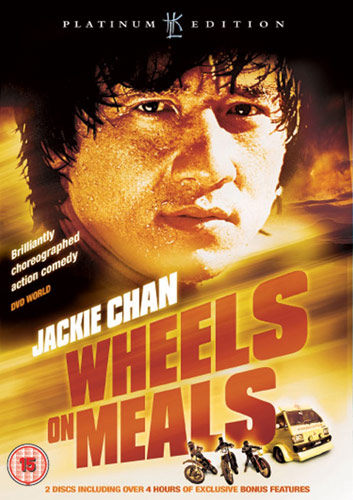 From their youth in the Peking Opera Academy to their early rise to stardom in Hong Kong, Jackie Chan, Yuen Biao, and Sammo Hung all seemed inseparable. If they weren’t battling hordes of henchman and dastardly villains alongside one another in the likes of Project A, My Lucky Stars, or Dragons Forever, they were lending each other a hand behind the scenes in their solo outings. The latter practice seems much more commonplace these days, but each onscreen collaboration with the three of them is some of the best work each has ever done, and Wheels on Meals is most certainly in the upper tier of their team-ups!

Jackie Chan heads up the film in the role of Thomas, with Yuen Biao portraying his cousin and business partner David. The two of them run a fast food business from their van, with the dynamite duo concealing their martial arts from their clientele! Sammo Hung, who also directed the film, takes on the role of Moby, an up-and-coming private investigator hot on the trail of Sylvia, played by Spanish actress Lola Forner, an heiress on the run from a local crime syndicate.

Jose Sancho portrays the villainous gang leader Mondale, but this is most certainly a case where the henchman are the evildoers everyone really remembers. Of Mondale’s two unnamed henchman, one is portrayed by renown karate champion Keith Vitali, fresh from his role in “Revenge of the Ninja” and bringing with him all of the charisma and fighting prowess he’d displayed onscreen before and since. Mondale’s other henchman is portrayed by none other than Benny “The Jet” Urquidez. One of the most legendary kickboxers in history, this would be Urquidez’s first of two collaborations with Jackie Chan (the second being Dragons Forever) and Wheels on Meals would see the two face off in what would ultimately become one of the most famed onscreen duels of Jackie’s career!

Cousins Thomas and David, run a fast food business out of their yellow, turbo-charged, super-mobile-kitchen in Barcelona, Spain, with Thomas typically delivering the food via skateboard. While visiting David’s institutionalized father, the two bump into an attractive girl named Sylvia who David takes an immediate liking to but ultimately proves too shy to approach. The two later encounter Sylvia pretending to be a prostitute whilst picking the pockets of a few locals. Sylvia then manages to wrangle her way and seek refuge in the apartment of Thomas and David, owing to the cousins’ infatuation with her, only to awaken the next morning to find Sylvia gone along with their money!

Later, Thomas and David run into Moby, a private investigator on Sylvia’s trail. The two men learn that Sylvia is actually an heiress to fortune and is being pursued by local mafia. After her pursuers finally succeed in kidnapping Sylvia, Thomas, David, and Moby team up to rescue her.

Your insolence does not amuse me sir

Uncle Ip Man thanks for all the tips

The 3 musketeers All for one and one for all

The energy at work in Wheels on Meals is so palpable, one feels almost as though they could reach right through the screen and touch it. The film’s three leading men were all at the very beginning of their ascendency to the top of Hong Kong’s action legends, and display a level of intensity and zeal for action filmmaking that one would associate with a group of 10-year old boys on a playground one exciting summer’s afternoon! One gets the impression that the opening scene of Thomas and David’s early morning training ritual is really how the three leads began, and perhaps saw, each day of filming (the easy flexibility Yuen Biao displays mere moments after getting out of bed is envy-inspiring to say the least!).

The film is also testimony to Jackie’s willingness to keep his ego in check and allow his two brothers to share the spotlight with him. The trademark levity that he brings to every film he’s in is the only significant aspect of the film that would lead fans to label the film a Jackie Chan movie in the purest sense. Rather than the vehicle for any one leading man, the film is an ensemble showcasing the three of them working in rhythmical symphony, bringing out the best in each other.

Each of the film’s stars brings his own unique element to the action. While overseeing the film as a whole from behind the camera, Sammo Hung serves as one of the film’s major sources of comic relief, and bears the brunt of most of the pratfalls throughout the film. He’s a bit more of an underdog than his two co-stars, frequently finding himself in way over his head, by nevertheless rising to the occasion at every opportunity. Yuen Biao draws upon his trademark agility and acrobatic finesse in his action scenes, especially during a blazing duel with Keith Vitali that sees both men taking their share of punishment. However, the films climactic duel between Jackie Chan and Benny “The Jet” Urquidez is by far its most notorious, and with good reason. 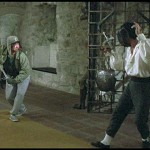 Put it there bro

For all the comedy he stuffs his films with, Jackie has never shied away from making both the stunts and combat sequences as punishing and intense as possible, even at the risk of potentially shaving a few years off of his own life. His battle with Urquidez is as brutal and merciless as they come, able to powerfully relay the combination of power and emotion fueling both fighters. The look on Jackie’s face communicates just how much he’s forcing himself to push through the pain, along with suggesting that he’s moments away from exploding out of sheer rage from the smug, pompous expression Urquidez sports throughout the fight. The duel between these two legends of martial arts has often been cited as among the greatest ever put to film, and after seeing it, you’ll surely be hard-pressed to find evidence to the contrary.

Whether it’s the onscreen team-up of Jackie Chan, Yuen Biao, and Sammo Hung or the final fight between Jackie and Benny Urquidez that most entices you to the film, Wheels on Meals is an absolutely splendid martial arts comedy showcasing its entire cast in the midst of their primes. Anytime time the three brothers of the Peking Opera Academy appear onscreen together is a recipe for perfection. Between each of them now entering their later years and the dearth of recent onscreen team ups between the three, let’s keep our fingers crossed that we may soon see an “Expendables”-esque reunion in the near future. In short, if you like insane amounts of action coupled with smoothly-performed, yet hard hitting martial arts with some downright wacky humour thrown in, you’ve got to see this movie- you’ll get so absorbed that you’ll hardly notice 90-minutes whizzing by in a flash! 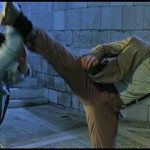 A little mid fight stretch out