Featuring Sammo Hung in his first leading role, “THE SHAOLIN PLOT” is released on Blu-ray for the first time in the UK from a brand-new 2K restoration as a part of the Eureka Classics range.

ORDER your copy of this old-school, kung fu classic which is available from today, 20th June 2022 NOW, from Eureka Video or Amazon!

In a career spanning six decades, he has worked with some of the best in the business, from Bruce Lee to Jackie Chan. His work as a performer, choreographer and director helped to reshape and evolve modern screen fighting action as we know it.

From his earliest works such as “Iron Fisted Monk”, “Warriors Two”, “Knockabout”, “The Prodigal Son”, to his comedies and collaborations with his fellow “Fortunes” opera brothers, including “Encounters of the Spooky Kind”, “My Lucky Stars”, “Eastern Condors”, “Wheels on Meals”, to modern-day hits such as “SPL/ Kill Zone”, “Call of Heroes”, “Ip Man”, “Paradox” and “The Bodyguard”, there are very few others who have delivered such a variety of action to consistently high quality levels over such a long career.

A veteran of Hong Kong movies, appearing in over seventy productions, James Tien plays “Little Tiger”. Well known for his appearances alongside Bruce Lee in “The Big Boss” and “Fist of Fury“, he also featured in classics such as “Hand of Death“, “The Iron-Fisted Monk”, “Spiritual Kung Fu”, “Magnificent Bodyguards”, “The Fearless Hyena“, “The Prodigal Son”, “Dragon Fist”, “Yes Madam”, “Millionaires Express“, “Winners and Sinners”, “Eastern Condors”, and many more.

Singaporean actor Chen Hsing plays the villain “Prince Daglen”. He is best known for his appearances in many of director Chang Cheh‘s films and Shaw Brothers productions including “Return of the One Armed Swordsman”, “The Invincible Fist”, “Have Sword, Will Travel”, “The Heroic Ones”, “The Bloody Fists” and “Shanghai Thirteen”.

Keep an eye out for legendary stunt performers

Punches and kicks all look full on

Playing mostly supporting or “henchmen” roles, he became a recognisable face with his high-kicking skills in movies such as “The Heroic One”, “Master With Cracked Fingers”, “Killer Constable”, “Return to the 36th Chamber”, “My Young Auntie”, “Dragon Lord”, “Ninja in the Dragon’s Den”, “The Dead and the Deadly”, “Duel to the Death”, and “Project A”.

Keep an eye out for legendary stunt performers such as Cheung Fat/Mars, Yuen Wah, Yuen Biao, Mang Hoi, Lam Ching Ying, and Fung Hak On, who would all become staple performers in Sammo’s later movies. 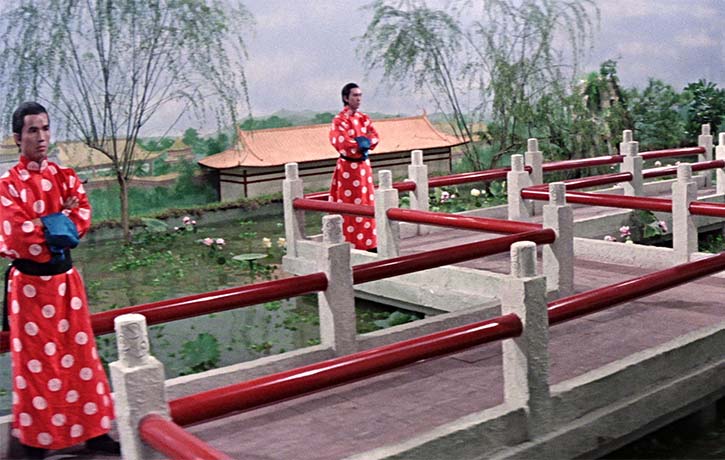 A tyrannical dictator aims of to collect all existing Chinese martial arts manuals in order to attain ultimate power.

After obtaining the Wu Tang manual, he sets his sights on the Shaolin Temple and the secrets of their fighting style.

Two Shaolin Monks must team up with a rival Wu Tang fighter if they are to have any hope of defeating the villainous despot.

Monks of the Shaolin Temple contemplate

Full on Punches and Kicks

With Sammo Hung’s status growing as a leading action director in 1977, we see early on in the fighting some of his trademark flourishes. There are a few acrobatics and handstands in there as you might expect from Chinese Opera performers-turned stuntmen. With Sammo also playing a leading role, the punches and kicks all look full on, with long takes capturing some fluid combinations of blows.

Being set in the early Qing dynasty, traditional weapons including swords, spears and even metal whip chains are incorporated into the martial arts scenes.

One unique feature is a pair of flying cymbals that can behead an opponent, resulting in a fair bit of gore and bright red theatrical blood. Fans of the Flying Guillotine films will enjoy it!

Veteran star, James Tien has one of his best action scenes when he takes on numerous Shaolin monks. Each monk represents one of the different methods of the mythical Bodidharma’s Shaolin Luohan Eighteen Hands.

As in many of his film roles, Tien himself fights mainly using a longfist style, but also gets to demonstrate his prowess with a pair of Butterfly Swords.

Korean martial artists are renowned for their supreme kicking skills, and this is perfectly showcased in the film’s finale when Casanova Wong and Kwan Yung Moon confront Chen Hsing as the villain.

Casanova Wong in particular, demonstrates the sublime precision, skill and flexibility that would make him one of the legendary super kickers of Hong Kong kung fu films.

Fans of the 1970’s old school of kung fu movie will find plenty to enjoy in “The Shaolin Plot”. It takes many familiar elements of period films from that era, but presents them with some impressive cinematography and of course Sammo Hung beginning to really hit his stride as action choreographer.

A rarity in that it takes time to cultivate the plot

Korean Buddhist temples stand in for the legendary Shaolin Temple

Considering the age of this movie, it is a rarity in that it takes time to cultivate the plot, pushing the running time to nearly two hours.

The restoration job on this Blu-ray really does justice to the colourful costumes and beautiful Korean locations that double for Qing dynasty China.

The packaging and artwork are to Eureka’s usual high standards, as is the limited edition collector’s booklet featuring new writing by James Oliver.

Did you know that Shao Lin translates as Little Wood

This is a classic kung fu flick that also serves as a demarcation of the “post-Bruce Lee era”, when Asian cinema’s martial arts choreography started to move up to another level in the films that followed it.

THE SHAOLIN PLOT is out is on Blu-ray today 20th June, so order your copy NOW from Eureka Video or Amazon!

KEEP THE OLD SCHOOL ERA OF 70’s KUNG FU ALIVE in the KINGDOM of FU with these Top 10’s<, Top 5’s, exclusive interviews, COMBINE THE OLD SCHOOL and THE NEW to originate YOUR OWN SPECIAL SIGNATURE STYLE in KFK gear, and subscribe for more CLASSIC MATERCLASSES in FU on YouTube!

Adesanya is a Huge Favorite to Defend His Title Against Cannonier