“DUEL TO THE DEATH”, the action-packed, kung fu, swordplay extravaganza is here from Eureka Entertainment! Starring Norman Chui, Damian Lau and Flora Cheong-Leen, and directed by Tony Ching Siu-tung, it’s now presented on Blu-ray from a brand new, 2K restoration as part of the Eureka Classics range from 20th September 2021!

Pre-order your copy of this finest edition now from Eureka Entertainment or Amazon and STAY TUNED to ENTER our COMPETITION so you can WIN YOUR COPY in the next few days too!

Shaw Brothers veteran Norman Chui Siu-keung stars as “Hashimoto”, a highly skilled samurai swordsman. Chui has featured in dozens of classics such as “Shaolin Mantis”, “The 36th Chamber of Shaolin”, “Tiger on the Beat” and “Wing Chun“. Still active in the industry, he appeared in the 2016 3D blockbuster “Sword Master” and the recent Chinese hit “Taoist Priest”.

Popular Chinese TV and film actor, Damian Lau stars as “Bo Ching-wan”, also known as “Lord of the Sword”, is a peaceful and contemplative martial artist who has trained with Shaolin monks. Lau made his big screen debut in “Last Hurrah for Chivalry“. He would go on to appear in classics such as “Zu Warriors from the Magic Mountain“, “Heroic Trio”, “New Legend of Shaolin”, “My Father is a Hero/The Enforcer” and “Three Kingdoms: Resurrection of the Dragon”.

A bona fide classic of the wuxia and swordplay genre 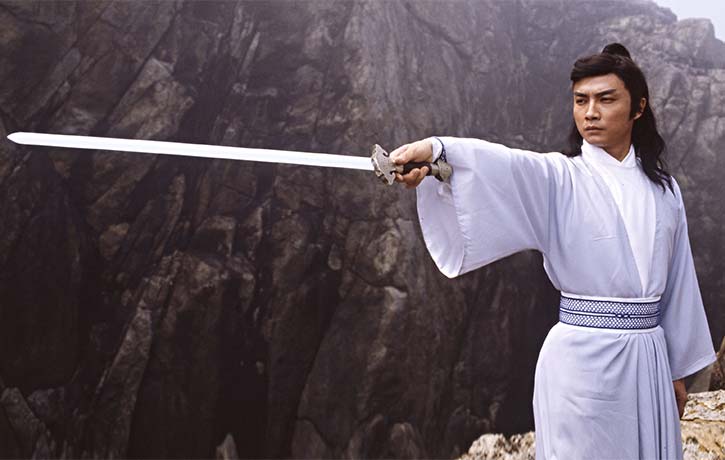 Ballet dancer turned actress turned fashion designer, Flora Cheong-Leen stars as “Sing Lam”, who disguises herself as man due to her expertise with a sword.

Every ten years, a duel is held between the finest Japanese and Chinese martial artists to determine whose swordsmanship is superior.

During the Ming Dynasty, as the next duel approaches, the chosen candidates are caught in the middle of a battle between Ninjas and Shaolin monks. Only a duel to the death will settle the countries’ conflicts and stop the bloodshed.

From the opening scenes there is a distinct, and fairly unique style to the cinematography.

A group of ninja-like bandits infiltrate the Buddhist temple. There are dolly-shots, obtuse camera angles, and even handheld filming. The fight choreography encompasses opera-style acrobatics, wire work, and good old-fashioned traditional sword fighting. The snappy editing keeps everything energetic without detracting from the fighting.

An almost supernatural element is incorporated into the fighting, but the excellent swift, and stylish style of the grounded elements compensate before it all gets too silly. Having said that, there is a bizarre fight featuring, and I am not making this up, a giant ninja and a naked woman!

An Influence on “Hero”, “House of Flying Daggers” & “Crouching Tiger”…

From this eclectic mix of choreography and cinematic techniques, you can see how many scenes have influenced other works such as Zhang Yimou‘s “Hero” and “House of Flying Daggers”, or Ang Lee’s “Crouching Tiger, Hidden Dragon”, among many others.

Prepare to feel my steel

Duel to the Death is a highly influential film

An eclectic mix of choreography and cinematic techniques

Norman Chui Siu-keung and Damian Lau are excellent in the fight scenes. Former ballet dancer Flora Cheong-Leen stands out with her beautiful and graceful sword skills, much like Zhang Ziyi would many years later. It’s a shame Flora didn’t make more movies like this. The fashion world’s gain is certainly Hong Kong action cinema’s loss!

Ninjas versus Shaolin Monks: the classic plot device of a Japanese style’s rivalries with a Chinese one! What’s not to love?

The snappy editing keeps everything energetic without detracting from the fighting

The acting performances are mostly B-movie fare, but the action is excellent. Many of the fights take place in some beautiful-looking locations, not least the cliff top-based final duel.

One thing that did grate is the mostly awful music score, which sounds like a cheap imitation of the legendary puppet master Gerry Anderson’s TV shows.

There are many beautiful locations

Particularly fascinating is a brand new filmed interview with screenwriter Manfred Wong. He gives a detailed history of Hong Kong’s TV and film industry from the 1970s to the present day. His views on the current and future state of the industry are especially interesting.

“Duel to the Death” is a bona fide influential classic of the wuxia and swordplay genre. Looking better than ever in this high definition Blu-ray release, connoisseurs of Hong Kong action and stylish cinematography will lap this one up.

“DUEL TO THE DEATH” is out on Blu-ray from 20th September 2021, pre-order your copy now from Eureka Entertainment or Amazon and DON’T FORGET to ENTER our COMPETITION / GIVEAWA soon to WIN YOUR COPY!

Pre-order “DUEL TO THE DEATH”, on Blu-ray NOW!

Is this one among your favourite wuxia movies? Do you think this features some of the best swordplay of the genre? Which other cool, old-school, kung-fu flicks would you love to see get the same Blu-ray, TLC treatment? Let us know in the comments below, join in the conversation, share this on Facebook, and follow us on Twitter & Instagram!

SHAOLIN VS NINJA: WHO WINS? FIND ANSWERS IN THE FU-niversity with these Top 10’s, Top 5’s, deep-dive interviews, OUTSMART YOUR QUARRY in KFK gear, and subscribe for more HIGH-ORDER FU on YouTube!