Jackie Chan’s 1982 action-packed, kung-fu comedy, “Dragon Lord” is OUT NOW from 88 Films and Amazon! Developed from a beautiful 2K restoration and featuring for the first time the extended 103-minute cut, 88 Films continue to build their stellar Blu-ray catalogue of old-school martial arts classics!

International superstar Jackie Chan directs and stars as “Dragon Hu / Lung”. He is joined by one of his closest friends and prolific stunt performer in his own right, Cheung Wing-fat. Playing Lung’s friend “Bull / Cowboy Chin”, Cheung is better known by his stage name, Mars. He has appeared in or performed stunts in over 100 productions, including “Come Drink With Me”, “Fist of Fury”, “Enter the Dragon”, “Odd Couple”, “Knockabout”, “Lackey and the Lady Tiger”, “Project A”, “Police Story”, “Miracles”, “Rush Hour” and many, many more. 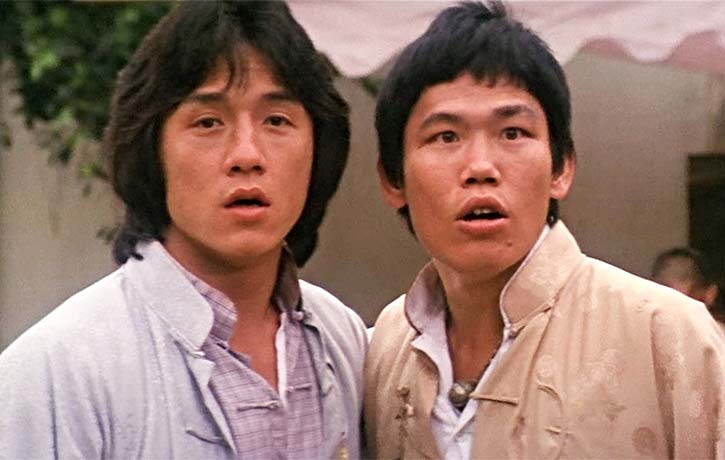 Jackie Chan and Mars are close friends in real life

Starring as “The Big Boss” is real-life Hapkido expert, Hwang In-shik. He has faced off against Bruce Lee in “Way of the Dragon” and previously fought Jackie Chan in “The Young Master”. A real-life martial artist with underworld connections, Michael Chan Wai-man plays the gangster “Hoi / Tiger”. With nearly 200 credits to his name he has appeared in Jackie Chan’s “Project A Part 2“, the award-winning comedy “Gallants”, as well as the “Young and Dangerous” Triad movies, and Brandon Lee‘s “Legacy of Rage”.

Movie veteran Tien Feng plays “Dragon’s Father”. Born in 1928, he appeared in over 120 Taiwanese and Hong Kong productions. Martial arts fans will recognise him from his roles in movies such as “One Armed Swordsman”, “King Boxer”, “Fist of Fury“, “The Young Master” and “Miracles”. Fellow popular character actor Paul Chang Chung plays “Chin’s Father”. He has appeared in “Wheels on Meals” as Yuen Biao’s crazy father, “My Lucky Stars” as the dapper-suited crime boss, “Millionaires Express” as one of the mountain bandit chiefs, and in “Police Story” as the Crown Court Judge.

Mischief on the roof

Dragon and Bull are childhood friends who spend most of their free time chasing after local girls in general and spying on one in particular who catches their eyes.

A gang in the nearby dwelling is smuggling precious Chinese artefacts to westerners. Hoi is a reluctant party to the scheme and when he voices his objection, the Big Boss sent his henchmen after him to keep him quiet. When the mischievous duo come across Hoi, who was hiding in their village, they take on the gang to protect the artefacts.

The film opens with a truly unique and astonishing set piece. Dozens of stunt players fight their way to the top of a several metres’ tall bamboo pyramid to claim a golden egg. As they all fall on top of each other, it is not difficult to imagine how many suffered injuries. The game transforms into an acrobatic rugby match, again with dozens of stunt performers somersaulting over and onto each other. If you ever hankered for a rugby or American football version of Shaolin Soccer, you will love this sequence!

A gang nearby is smuggling precious Chinese artefacts

Jackie Chan vs Hwang In shik is an incredible fight scene

Ronaldo & Messi Have Nothing on the JC Stunt Team!

Another unique set piece is the incredible shuttlecock tournament. Playing like a cross between street football and a game of “keepy-uppy”, there are some incredible physical skills on display. Ronaldo and Messi have nothing on the JC Stunt Team! There really hasn’t been a sequence quite like it before or since, and it’s hard to imagine anyone ever being able to assemble a team of Hong Kong stunt players with this sort of skill set again.

The fight choreography is initially less stylised than Jackie’s preceding kung fu movies, looking much more like people “having a scrap”. That’s not to say there aren’t some nice flourishes throughout, but you get the feeling Jackie was trying to move towards a more realistic style, as well as starting to incorporate stunt action, rather than just traditional martial arts sequences.

A trick is brewing

As the film heads towards its conclusion, Jackie includes more and more of his now familiar flamboyance. You can almost see the genesis of the fighting style that would emerge in films like Project A, before finally coming to the fore in Armour of God and Police Story.

For the finale, Hwang In-Shik certainly makes for a formidable villain. Mars gets to demonstrate why he is such an integral part of the JC Stunt Team, performing some incredibly painful looking hits and high falls. There is an amazing one-shot stunt with Jackie falling from a rope to a roof beam, and onto Mars’ back on the ground below. The real life Hapkido master Hwang In- Shik is rarely flashy, just swift and powerful, with every strike impacting like a meteor!

88 Films have once again put together a beautifully-packaged Blu-ray, with replica lobby cards and a poster of Kung Fu Bob’s exceptional artwork. There are options to view the theatrical cut or the rare extended cut, alongside just about every audio option you could wish for. Extras include interviews with producer Louis Sit, stuntman and actor Mars, and legendary villain Hwang In- Shik – check out our exclusive interview with him below!

There is wonderful chemistry between Jackie Chan and his long time friend Mars. It is as natural as any of Jackie Chan’s roles alongside Sammo Hung and Yuen Biao, and a source of much of the entertainment to be had from this movie. They are both of course exceptional physical performers, and fans will enjoy every minute that they leap into action.

With its unique set pieces and a slightly greater emphasis on stunts, “Dragon Lord” forms an interesting bridge between Jackie Chan’s traditional martial arts movies of the late 1970’s and the kind of incredible action that would define his career throughout the 1980’s. 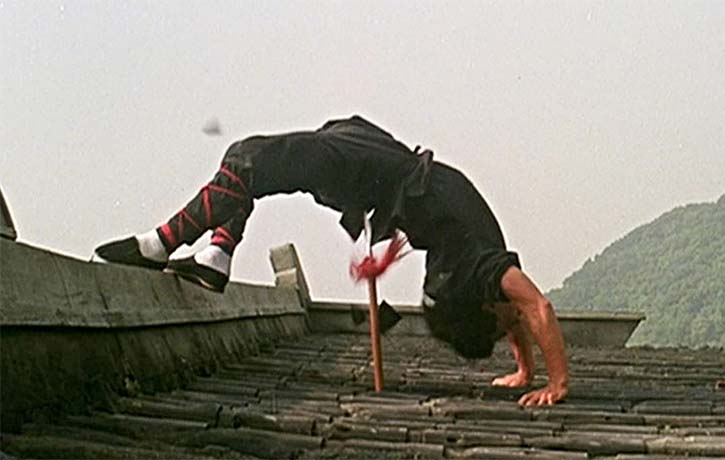 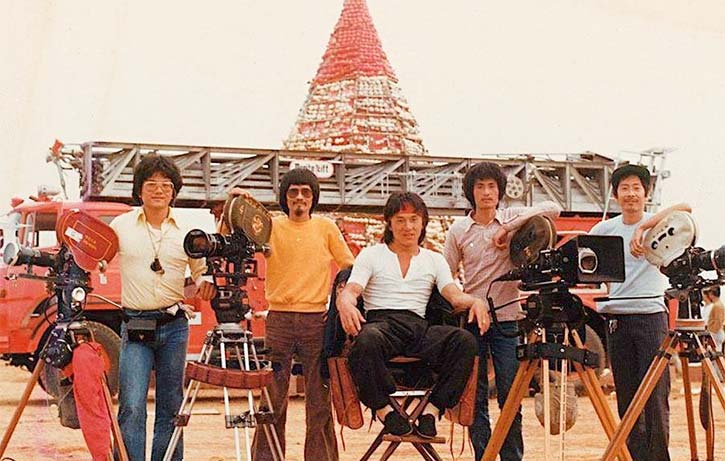 “Dragon Lord” is OUT NOW on stunning Blu-ray, order your copy via 88 Films or Amazon!

Does “Dragon Lord” rank among your favourite Jackie Chan movies? What do you remember best about this genre-bending title; the Pyramid Bun Fight, the Shuttlecock Tournament or the fast, insane and eye-popping fight against the sinister character played by hapkido kung fu legend, Hwang In-shik? Which other Jackie Chan classics have you been enjoying recently? Let us know in the comments below; Like, share and join in the conversation on Facebook and follow us on Twitter & Instagram!

ARE YOU LORD OVER YOUR FIGHTING STYLE? THEN CONTINUE TO TRAIN YOUR DRAGON in the FU-niversity of Top 5’s, Top 10’s, (including Jackie Chan’s Top 10 Fight Scenes) interviews, go DRAGON-MODE in KFK Official gear and subscribe for more kung-fu cult action on YouTube!