As we approach the 40th anniversary of its release, we take a look back at the Shaw Brothers classic, “My Young Auntie”. Directed by the legendary Lau Kar-leung, it established Kara Hui as one of Hong Kong’s brightest female martial arts stars.

Action actress Kara Hui Ying Hung stars as “Jing Dai-nan”, the titular young auntie. Kara Hui got her big break in 1976’s “Challenge of the Masters”, going on to appear in many Shaw Brothers classics including “Invincible Shaolin”, “Mad Monkey Kung Fu”, “Dirty Ho”, “Legendary Weapons of China“, “Clan of the White Lotus” and “Return to the 36th Chamber”. Still active today, in recent years she has appeared in the martial arts horror movie “Rigor Mortis” and opposite Donnie Yen in “Dragon / Wuxia“.

Hong Kong martial arts film actor, stunt performer and action choreographer, Hsiao Ho plays “Charlie Yu Tao”. He began his career in movies at the age of 17 under the guidance of Lau Kar-leung. He is probably best known for his roles in the movies “Mad Monkey Kung Fu”, “Disciples of the 36th Chamber”, “Legendary Weapons of China” and “Iron Monkey“. 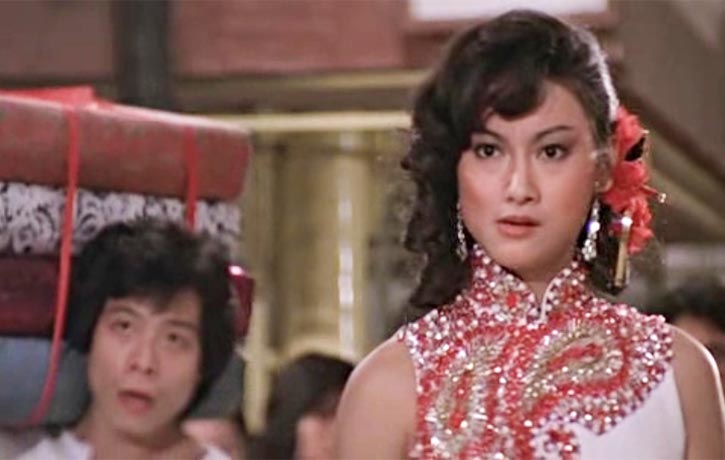 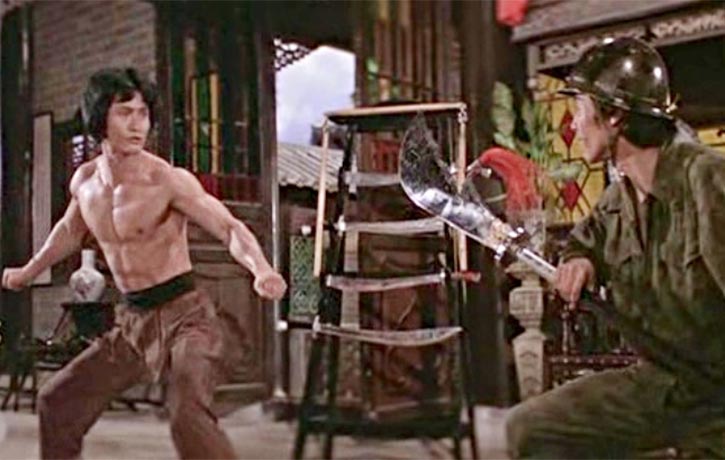 Actor, writer and director Johnny Wang Lung-Wei plays the villainous “Yu Yung-sheng”. Spotted by director Chang Cheh, Wang made his acting debut in “Five Shaolin Masters”. He went on to appear in over eighty movies in twenty years, including classics such as “Shaolin Temple”, “The Brave Archer” and “The Avenging Eagle”.

From 1985 he used his years of experience off camera as a writer, choreographer and director. In 1992, he directed the notorious martial arts exploitation film called “Escape from Brothel”.

A member of the Seven Little Fortunes, Yuen Tak appears as “Ah Tak”, Yu Yung-sheng’s Godson. As well as appearing in several classic films, he went on to great acclaim as an action director. A frequent collaborator with Corey Yuen, his work includes movies such as “Prince Of The Sun”, “Iceman Cometh”, “Dragon From Russia”, “Saviour of the Soul”, “Fong Sai Yuk”, “She Shoots Straight”, “Operation Scorpio / Scorpion King”, “Gallants” and many more. Keep an eye out for a blonde-wigged Gordon Liu in a guest appearance! 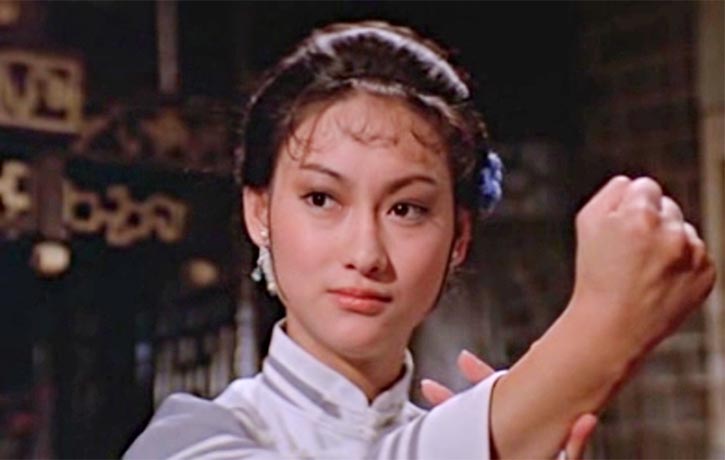 What fist is that

Honest and faithful servant Jing Dai-nan marries her elderly master so the old man can keep his estate from falling into the greedy and unscrupulous hands of his brother, Yu Yung-sheng.

When the old master passes away, Dai-nan inherits his estate and travels to Guangzhou, to pass it on to his favourite nephew, Yu Cheng-chuan, and his son Yu Tao.

Hilarity ensues when the traditional and conservative Dai-nan, a woman from the provinces, experiences the modern and westernised world of Yu Tao for the first time.

When the evil brother Yu Yung-sheng takes his chance to steal his brother’s last will and testament, Dai-nan and Yu Tao unsuccessfully attempt to steal it back. Yu Tao must return with his extended and elderly family to retrieve the will and save young auntie.

Kara Hui – A Turning Point in Her Career

The opening titles, replete with dramatic theme music, play over Lau Kar-leung looking as sharp and powerful as ever, as he busts out a kung fu fist form. It proves to be a red herring, as the usually very serious master filmmaker, embarks on a comedy-of-errors, as he tries to establish contact with Kara Hui as Auntie.

Kara Hui quickly establishes her own kung fu credentials when she teaches a gang of rude hooligans a lesson. Directed by Lau Kar-leung, her strikes look authentic and hard-hitting, as you would expect. What is more remarkable is that Hui was recovering from an operation when this scene was filmed, with much of the action performed whilst she was seated in a rickshaw.

Hsiao Ho gets an acrobatic introduction in a “kung fu-off” with Kara Hui. Both stars demonstrate a variety of impressive traditional martial arts skills, whilst being doubled for some amusing gymnastic elements. When the naïve young country girl gets into a scrape in the city, the pair team up to great effect in an entertaining street fight.

Although there is plenty of simplistic, almost “Carry On” style humour, at one point I thought I was watching a kung fu Cliff Richard movie, as Hsiao Ho and his college chums burst into song! It’s shortly followed by a fancy dress dance number!

Even so, as with the fighting, the choreography is very energetic and precise. Featuring a bewigged, guest-starring Gordon Liu, the fancy dress ball soon descends into a brawl. There are some Errol Flynn-style sword antics, before Kara Hui brings in her more traditional Chinese kung fu skills to take on the troublemakers. There are moments of truly astonishing ability coupled with slapstick comedy that wouldn’t look out of place in a Laurel and Hardy film.

In a unique take on the usual training montage, Kara Hui puts a bunch of old geezers through their paces. Even though it is played for laughs, there are still some impressive demonstrations of their physical dexterity.

The stealthy assault on Yu Yung-sheng’s house is presented as a comedy sequence, but features some vicious and deadly-looking booby-traps that even Indiana Jones might baulk at, for our heroes to negate.

Kara Hui takes a brawl in her stride

Once inside the mansion, they encounter Ah Tak and his henchmen. The ensuing brawl brings with it some excellent trademark Lau Kar-leung choreography, embracing strikes, kicks, acrobatics, swords and spears. The pace is breathtaking and the long takes don’t even cut between fighters, with the camera instead fast-panning to each sequence.

The grand finale reveals that the four geriatric uncles are not as inept as their training led us to believe. Lau Kar-leung always excels when he not only directs, but stars in these scenes. He also subverts the practice of “hard qiqong”, with the physically impressive Kwan Yung-Moon playing a seemingly-invincible, high-kicking hulk.

Kar-leung’s choreography, particularly with the weapons, is versatile and spectacular, and yet retains the authentic application of each technique on display. It is a genuine marvel for traditional martial artists who practice the styles on display to enjoy. 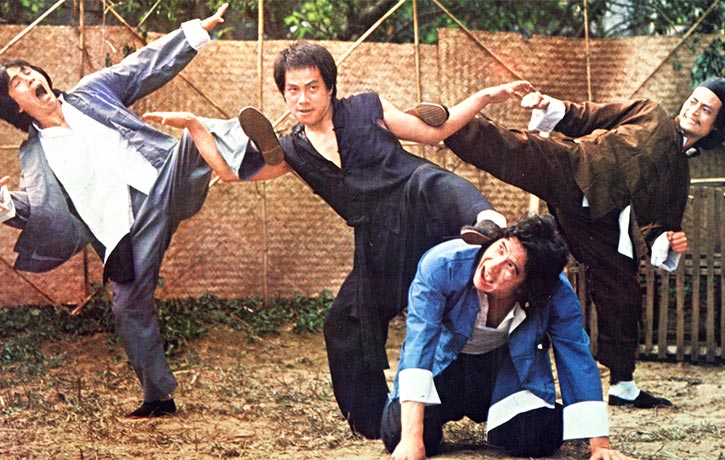 More to these old dudes than meets the eye

Young Auntie in a bit of a bind

A film I haven’t seen since the days of VHS, it was a genuine treat to revisit this classic. Kara Hui is absolutely delightful as the pretty country girl who, despite her naivety, can hold her own against her male peers.

That’s not to say this film isn’t without its misogynistic moments, but viewed through 21st century “woke” lenses, it could be argued it is the female lead that is getting the last laugh over the hapless male characters.

In fact, although there is no doubt this is first and foremost a light-hearted martial-arts comedy, Lau Kar-leung still manages to challenge the issues of tradition, gender roles, and the westernisation of Chinese culture.

There is pretty much a 75/25 split in how the movie plays out. The first three-quarters spends much of its time focusing on the comedy-of-errors set-pieces, and the playful rivalry between Jing Dai-nan and Yu Tao.

The last twenty-five percent of the movie however is much closer in style to Lau Kar-leung’s other works. The fight scenes are up there with some of his best, with incredibly long takes and blistering-but-silky-smooth choreography. We even get a glimpse of how a Lau Kar-leung directed “Three Musketeers” might have looked. 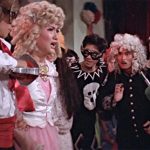 Putting the old geezers through their paces

Much like Angela Mao-ying before her and Michelle Yeoh after, Kara Hui looks like she genuinely knows traditional martial arts. Although occasionally doubled there is no denying her grace, flexibility and, when called for, power. As Cheng Pei-pei did in the sixties and Angela Mao in the seventies, at the outset of the eighties, Kara Hui laid down a solid claim for female stars in martial arts action leads.

If you are looking for something in the vein of Lau Kar-leung’s more serious films, but a little lighter going, “My Young Auntie” is an entertaining and amusing film featuring some superb traditional kung fu choreography!

Charlie has some high jinks with his college chums

Kara Hui is graceful and flexible

Yu Tao gets into a street fight

Can you believe MY YOUNG AUNTIE is 40 years old already? Are you a fan of Kara Hui? Who’s your favourite kung-fu femme? Which other classic martial arts comedies have you been enjoying recently? Let us know in the comments below, join in the conversation, share this on Facebook, and follow us on Twitter & Instagram.

AUNTIE, KNOW KUNG FU? IF NOT, ENTER THE FU-NIVERSE of these Top 5’s, Top 10’s, exclusive interviews, get your special moves on in KFK wear and subscribe for all types delightFU action on YouTube!