Four years on from Zhang Yimou’s worldwide box office hit Hero, martial arts superstar Jet Li returned to the world of the Chinese wuxia movie genre for what he claimed would be the final time in 2006. Here he plays the real-life Chinese national hero and renowned martial arts champion “Huo Yuanjia”, whose name translates as “Fearless”.

Actor and practitioner of Shao Bei Quan, Chen Zhihui stars as “Master Qin Lei”, a rival martial arts master of Huo Yuanjia. He will be familiar to martial arts movie fans from his roles in “Three Kingdoms: Resurrection of the Dragon”, “Ip Man”, “14 Blades”, “The Legend is Born: Ip Man”, and “Shaolin”.

Action star Collin Chou plays “Huo Endi”, a famous master of Mizongyi, or “Lost Track Fist”, who was Huo Yuanjia’s father. Chou has appeared to great acclaim in The Matrix films as well as villainous roles in “Flashpoint”, “The Forbidden Kingdom” and “Special ID”.

There are cameos in the extended version of the film from Michelle Yeoh (“Crouching Tiger, Hidden Dragon”, “Yes Madam/Police Assassins”, “Tai Chi Master”, “Police Story 3: Supercop”, “Reign of Assassins”) as “Ms. Yang”, who tells Huo Yuanjia’s story to the Olympic Committee and also real-life Olympic boxing champion Somluck Kamsing (Thai: Somrak Khamsing); as “Beicha”, a Muay Thai kickboxer who encounters Huo Yuanjia. In the documentary series “Behind Closed Doors”, Kamsing had been due to fight Jean-Claude Van Damme, although the bout never came to fruition.

Huo Yuanjia is the unbeaten Champion of Tianjin

In Tianjin, China in the late Qing Dynasty, Huo Endi is a renowned martial arts master, known for his great skill in challenge matches on the raised “Lei Tei” platforms. His young son Huo Yuanjia wants to be a great master too, but his father is concerned about his asthma and refuses to teach him martial arts, insisting he concentrate on his academic studies instead.

Yuanjia sees his father in a lei tai match with Master Zhao, who wins the fight dishonourably by retaliating when Huo Endi held back what would have been a potentially fatal blow. Humiliated by his father’s defeat, Huo Yuanjia vows to regain the Huo family’s honour and pride by practicing martial arts behind his father’s back. The years pass and Huo Yuanjia defeats several opponents in lei tai matches to become a famous martial artist in Tianjin in his own right. The more matches he wins, the more arrogant he becomes. Goaded into fighting his great rival Master Qin Lei, and lacking the restraint of his father, Huo Yuanjia’s arrogance has tragic consequences for all concerned.

Fleeing Tianjin, Huo Yuanjia wanders aimlessly until some kind villagers teach him the value of compassion and humility, making him realise he has something better to offer. Returning to Tianjin in 1907, Huo Yuanjia responds to a challenge from a foreign strongman called Hercules O’Brien, who claims the Chinese are so weak none of them can defeat him in a match. The growing dominance of foreign powers in China, encourages Huo Yuanjia to establish the Chin Woo Athletic Association in Shanghai. Backed by his lifelong friend and wealthy businessman Nong Jinsun, they want to show the Chinese people and their foreign oppressors that they are not the “weak men of the East”.

Members of the foreign chamber of commerce fear that Huo’s notorious victories might encourage anti-foreign sentiments among the Chinese people. They propose a match between Huo Yuanjia and four champions, one from each of their home countries. Although he knows it is not a fair fight, Huo Yuanjia accepts the challenge to fight for the pride of a nation. 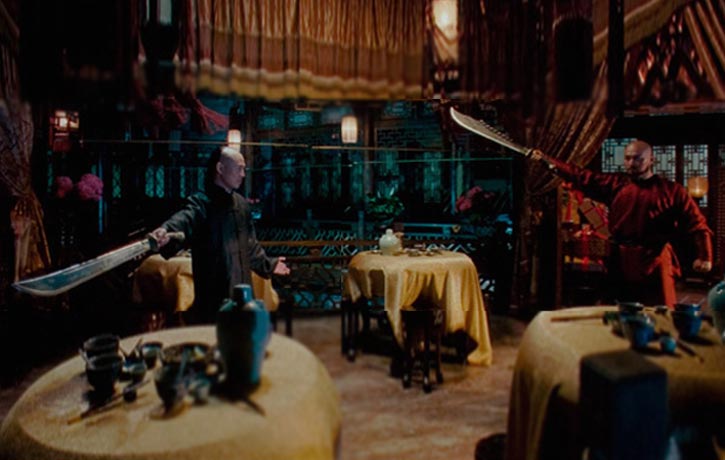 Opening in present day Shanghai, Michelle Yeoh explains what the spirit of wushu means and why it should be included as a sport in the Olympics. To make her point we are taken back a hundred years to learn the story of a man called Huo Yuanjia, or “Fearless”.

The initial martial arts forms and training featured are a mix of traditional-style longfist techniques occasionally interspersed with some modern wushu movements. The challenge matches follow suit with the addition of some wirework, as you would expect in a film of this nature. It still requires considerable physical skill to perform the choreography and every actor involved is very adept. Each fight has excellent pacing and demonstrates nearly all aspects of Chinese martial arts, including punching, kicking, throwing, grappling, “Chin na” (seizing and trapping), Southern and Northern styles, long and short weapons.

The sets look great with just the occasional use of CGI

Huos wife and their daughter Jade

Huo Yuanjias victories made him a national hero 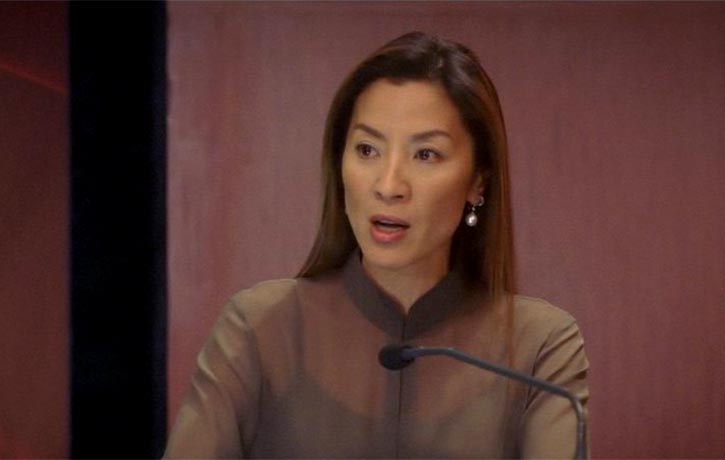 The film crescendos with the famous challenge match allowing Jet Li to fight with the spear, straight sword and three-section staff. It is some of the finest weapons work of his movie career and a real treat for fans. I don’t think Jet Li has shown such versatility in a single film since the original “Shaolin Temple” movies at the start of his career. It’s all captured beautifully with tracking camera work, slow motion filming and close up attention to the detail of the moves, such as the footwork or the twist of a fist for example.

The only additional action scenes in The Director’s Cut feature Huo Yuanjia as a child fighting the son of Master Zhao and a tense stand off with a Muay Thai boxer. Much of the extra running time is taken up by scenes in the middle act that depict Huo Yuanjia learning from the mistakes of his arrogance, recognising the value of humility and how wushu can be a vessel for bettering oneself.

The film was originally 140 minutes long. To meet “market demands”, it was cut to 105 minutes and the scenes with Michelle Yeoh and the fight between Jet Li and the Thai boxer portrayed by Somluck Kamsing, were removed. In December 2008, Universal released the Blu-ray version of the film, which contains three versions; Theatrical, Unrated and the Director’s Cut.

Additionally, the Blu-ray release features a behind-the-scenes documentary called “A Fearless Journey”. It is a revealing insight into how director Ronny Yu and choreographer Yuen Woo-ping interpreted Jet Li’s philosophical beliefs about wushu through the drama and the action depicted onscreen.

Huo realises he has something better to offer

Moon teaches Huo the value of compassion and humility

The Directors Cut gives the story a much deeper emotional core

I have something of a personal investment in the film’s lead character, having researched his life and the history of the Chin Woo/Jingwu Association extensively for a book. Whilst there are some scenes inspired by actual events, much of it is pure fiction. I can completely understand why some of Huo Yuanjia’s descendants were unhappy with aspects of the story and the characterisation of their famous ancestor.

However, judging this purely on its merits as a fictional movie, Jet Li delivers one of his best acting performances and this was arguably his last great onscreen martial arts performance. The slight re-editing of events and extended scenes of the Director’s Cut give the story a much deeper emotional core. Using Huo Yuanjia’s journey as a morality tale, it allows Jet Li to deliver his personal philosophy on the meaning of martial arts much more effectively. It rarely comes across as too “preachy”, which is often the case in other movies. Although occasionally a little wire-heavy, the versatility and range of martial arts choreography by Yuen Woo-ping is among the best work that he has ever done in the wuxia film genre.

On a technical level, the high definition version looks and sounds beautiful. The period costumes and sets are all very impressive with just the very occasional intrusion of CGI to recreate early 20th century Tianjin and Shanghai. Composer Shigeru Umebayashi’s music score perfectly compliments both the action and the more emotionally-driven scenes. If you have a big screen and decent sound system, the Blu-ray is unquestionably the version to get.

The fight with Master Qin leads to tragedy

The Blu ray is the version to buy

Find out how you can win a signed copy of the book Fearless The Story of Chin Woo Kung Fu and your very own Kung Fu Kingdom T-shirt & cup!