Jackie Chan reunites with director Stanley Tong for this espionage action comedy. The film was originally released as the fourth film in the popular “Police Story” series and titled “Police Story IV: First Strike” in some territories.

Action legend Jackie Chan reprises his role as “Kevin Chan Ka-Kui”, although in the dubbed international release he is called “Jackie”.

Jackie’s regular co-star from the previous three instalments, Bill Tung, returns as “Chief Inspector Tung” in his final movie role before retiring. Taiwanese actor Jackson Lou stars as “Jackson Tsui”, a scientist and suspect in the theft of a nuclear warhead. Martial arts movie fans will recognise him as the Japanese instructor “Ryuichi Akutagawa” in Jet Li‘s “Fist of Legend“.

Making her big screen debut is Taiwanese actress and model Annie Wu Chen-chun as “Annie Tsui”, sister of Jackson. Wu would later appear in the Donnie Yen film “Ballistic Kiss”, with Jackie Chan in “Gorgeous”, and more recently alongside Chow Yun-fat and Nicholas Tse in the comedy “From Vegas to Macau”.

They must avoid the ever present sharks

The underwater sequences are well lit and filmed

The snow sequence could be straight out of a Bond film

The outtakes reveal Jackie suffering for his art

The accuracy and speed of the choreography is sublime

Hong Kong supercop Jackie is assigned to the CIA to help them track down and arrest an illegal arms ring.

Following the mysterious Natasha to Ukraine, Jackie encounters Jackson Tsui, a Chinese American nuclear scientist with CIA links, suspected of stealing a nuclear warhead. Assisting Colonel Gregor Yegorov of the Russian FSB, whose job is to track stolen nuclear materials, Jackie accompanies the Russian agents to Australia. Tsui’s father is the local Triad boss in Brisbane, but seriously ill in hospital. Jackie rightly suspects that Jackson will try to visit his sister and sick father there.

Once he gets to Australia, Jackie soon discovers that not everyone can be trusted and he must strike out on his own to stop the nuclear warhead falling into the wrong hands.

Someone has stolen a nuclear warhead

Some of the sharks were real

Some of the action takes place in Brisbanes Chinatown

Shaking on it to seal the deal…

After a bit of scene-setting, Jackie follows his quarry to a secret mountain top meeting in snowy Ukraine. The CIA and a unit of Russian soldiers try to intercept the arms deal. Buried in the snow are a team of guards who burst out of the ground with machine guns blazing. Following the gunfight, Jackie is initially pursued on a snowmobile by skiers armed with machine guns. Using cameramen on skis and aerial photography, it’s a scene that could be straight out of a James Bond movie, and the director is not afraid to play on that. Having parted company with his snowmobile, Jackie continues his escape on a snowboard. Slow motion and close-ups reveal it is actually Jackie Chan performing the slides and jumps himself. The sequence concludes with Jackie flying off the edge of a cliff, briefly hanging onto a helicopter’s skid, before falling several metres into the frozen lake below. It’s an exhilarating sequence that sets the pace and tone of the action to come.

Once in Australia, Jackie has a brief sequence in an aquarium with a shark, setting up for a pay-off later on.

Having confronted Gregor, a team of Russian hitmen go after Jackie in his hotel room. The giant 7′ tall wrestler Nathan Jones makes a great foil for Jackie as he chases him around the room and balcony. The location itself gives Jackie a great opportunity to come up with some hilarious evasions as he uses everything in his surroundings to help him try to survive. As Jones exclaims at one point “He moves just like a monkey!”.

Plenty of bang for your buck

Pick on someone your own size

The action highlight of the movie for me is when Jackie confronts Annie and the Triad gang to clear his name. Starting at ground level, Jackie takes on multiple opponents whilst jumping under and over tables and chairs, and even twirling the furniture as a weapon. He moves up through the hall by climbing up a scaffold tower on wheels like a chimpanzee shooting up a tree. As the Triad gang pursue Jackie, he uses Lion Dance heads and plasterboards to give himself space to escape. Harking back to his traditional kung fu films, Jackie uses a broom handle and wooden poles, twirling and juggling them so each strike looks effective, but stylish. Most innovative of all is when Jackie uses a stepladder as an obstacle to move through and around, but also as an additional weapon to spin and twirl about himself.

Brisbane’s Chinatown is the setting for the start of the film’s climax. Jackie is in disguise and wearing long stilts. As you would expect, he finds a way to incorporate these into his kicks and stunts. Returning to the aquarium we are treated to a unique fight scene that takes place underwater. The stunt team still manage somehow to include some great fighting techniques, whilst trying to avoid the ever-present sharks that circle them. Considering the logistics and limitations of the environment, it is a really well choreographed and filmed sequence. Jackie concludes with a spectacular car jump launching himself onto a moving boat.

The obligatory outtakes at the end reveal Jackie really did roll around in the snow in little more than a T-shirt, and illustrate some of the injuries he received during his complex fight scenes. And yes, some of those sharks were real!

Jackie is assigned to the CIA

In his fetching hat Jackie finds the secret arms deal

In the mid 90’s, Jackie Chan’s Hong Kong films either intentionally or by design were becoming much more accessible to Western audiences. Having had great success internationally alongside director Stanley Tong with “Rumble in the Bronx“, the pair immediately followed up with “First Strike”. They repeated a similar formula of using locations outside of Asia, a strong mix of action and comedy, a Caucasian supporting cast, and filming much of the dialogue in English.

The resulting film was a huge success in Asia and well-received by Western audiences. The exotic locations from the James Bond-inspired snowboard chase in Ukraine, to the sunny Australian coast, were quite rare for a Hong Kong action film.

Jackie’s slapstick comedy delivers an entertaining chase around his hotel room, whilst his unique fighting style brought about one of his most memorable modern-day action sequences with the aid of a step ladder! Always looking for new ways of presenting screen combat, Jackie gives us fight scenes on stilts and even underwater. Stanley Tong always directs his films with style and knows just how to present Jackie’s brand of inventive choreography. The 80-minute international version moves along at an even pace so you are never left wanting for the action scenes.

This is one of Jackie Chan’s most broadly appealing Asian movies and should entertain fans of all types of action film. 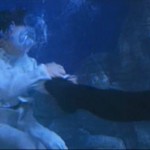 Even underwater the stunt team manage to fight

Even a stepladder can look amazing in Jackies hands

Close ups reveal Jackie actually did his own snowboard stunts

Cameramen on skis filmed the action

A table becomes a formidable weapon

Martial Art of the Month: Taekwondo