A “wuxia” film directed by Su Chao-pin and co-directed by John Woo, set during the Ming Dynasty. The film was released as “Dark Stone” in some terrorities.

Winner of several Best Actor Awards for his role in “Bodyguards and Assassins”, Wang Xueqi is the “Wheel King/Cao Feng”, villainous leader of the Dark Stone gang of assassins.

Taiwanese actor and director Leon Dai plays “The Magician/Lian Sheng” who uses illusions and tricks to foil his opponents.

Another Taiwanese star, Kelly Lin portrays “Drizzle” before her transformation into Michelle Yeoh!

Wisdom sacrifices himself to teach Drizzle an important lesson

Turquoise is a ruthless and deadly assassin

Turquoise can be a deadly temptress

The wirework never feels out of place

The Wheel King plays everyone off against each other

The Wheel King knows the flaws in Drizzles technique

Legend has it that the mummified remains of the Indian Buddhist monk, Bodhi have mystical powers.

The Dark Stone gang, having found that half of the remains are in Prime Minister Zhang’s hands, send assassins to kill him and his son Renfeng. Dark Stone’s top assassin Drizzle steals the remains and flees. During her escape she encounters a monk called Wisdom. Wisdom is an accomplished martial artist who shows Drizzle that her swordsmanship has four fatal flaws. Warning that she can be killed by a master, he attempts to persuade her to turn over a new leaf and leave the life of an assassin. After many months of training together, Wisdom sacrifices himself in a duel with Drizzle as a final demonstration intended to enlighten her. After Wisdom’s death, Drizzle is burdened with sorrow and guilt and decides to leave her old way of life. She visits a famous surgeon who changes her appearance and she assumes the identity of Zeng Jing, a common cloth merchant. She attracts the attention of a local courier, Ah-sheng, and eventually they marry. The leader of the Dark Stone gang, Wheel King, recruits and trains a new assassin, Turquoise Leaf, a merciless girl who murdered her fiance and in-laws on her wedding night.

Meanwhile the Dark Stone, are still in pursuit of Drizzle and the mummified remains.

When Zeng Jing single-handedly thwarts a bank robbery, her skills reveal her location to the Wheel King, who summons his top three assassins, Lei Bin, the Magician, and Turquoise Leaf, to hunt Drizzle down. The gang find Drizzle and she makes a deal with the Wheel King; freedom for Ah-sheng and herself in exchange for the half of the remains she took and help in collecting the other half.

Will Drizzle finally be able to escape her past, or will she have to assassinate the Dark Stone gang to finally escape them?

The Wheel King gets the upper hand

The Magician uses tricks and illusions to fight his foes

The final showdown takes place in a cemetery

The Dark Stone gang finally catch up with Drizzle

Some of the choreography is like watching an exquisite dance

The action choreography in this film is a hark back to the wuxia films of the nineties, such as “Once Upon a Time in China“, “Iron Monkey“, culminating in the worldwide hit that was “Crouching Tiger, Hidden Dragon“.

Within the opening credits we are given a brief introduction to the assassins and their skills, shot in a stylish “freeze-frame whilst keeping the camera moving” technique.

A more traditional style fight takes place when the assassins ambush Drizzle in their pursuit of the Bodhi’s remains. Kelly Lin portrays Drizzle here and gives a good account of herself considering she has to match up to Michelle Yeoh, with some dazzling sword skills.

When Drizzle meets up with Wisdom, the combat becomes more fantastical, with a great deal of wire-work and slow motion photography. However, it is well-framed in the narrative of learning the essence and grace of the sword skills.

One of the early highlights of the film is when Michelle Yeoh finally reveals her skills in a beautifully orchestrated bank heist. The choreography incorporates kicks, chin na (wristlocks and traps), acupressure and weapons, gracefully performed by all participants. 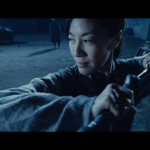 When Drizzle finally encounters Lei Bin, the Magician, and Turquoise, the action steps up a gear, with each protagonist bringing their unique skills to the fight. The Wheel King plays off the assassins against each other, and we get an enthralling battle of wits between the five assassins. Although there is a lot of wire-work and running up walls, it is well-choreographed and very pretty to look at. Michelle Yeoh’s swordplay is as good as in any of her previous work.

As the film progresses it is revealed that Jung Woo-sung’s simple courier, Ah-sheng, is not just in the film for comic effect. Wielding a sword and dagger, he has an impressive action scene against Lei Bin, Turquoise and various attacking ninjas.

The final battle is atmospherically set in a cemetery and pits The Wheel King against Drizzle. It is a dazzling, whirlwind of wire-fu and swordplay, which reveals the story of Drizzle’s “Water-Shedding” technique.

“Reign of Assassins” is somewhat of an overlooked modern classic of the wuxia genre.

It features an entertaining plot with a couple of little twists in the tale. The director, Su Chao-pin, takes his time to establish and flesh out the main characters and their back-stories, rather than having the usual two-dimensional “good master versus bad master” of other films in the genre. The performances from each actor are solid, especially from Michelle Yeoh, Jung Woo-sung and Wang Xueqi. This is the sort of role Michelle Yeoh thrives on, playing a strong but feminine female hero, and she doesn’t disappoint. There are some nice comic moments between Drizzle and Ah-Sheng, that really add to the charm of their romance.

Drizzle thwarts a bank heist with her kung fu skills

Drizzle changes her appearance to leave her past behind

Ah sheng is more than just a simple courier

Ah sheng fends off a band of assassins

A monk called Wisdom shows Drizzle the flaws in her technique

The action, as well as the drama, is filmed very stylishly. Much of the choreography is like watching an exquisite dance, and the slow motion and wire-work never feel out of place. Even the musical score sounds up-to-date and is appropriately dramatic and epic as and when required.

“Reign of Assassins” is up there with the likes of “Hero” (2002), “House of Flying Daggers” (2004), and “Crouching Tiger, Hidden Dragon” (2000). With it’s modern production values, it even stands up against older classics of the wuxia genre such as “The Swordsman” or “Zu Warriors”.

Fans of wuxia and swordplay movies should find much to enjoy in this one. And thanks to some decent acting and script writing, it may even convert some non-fans too!